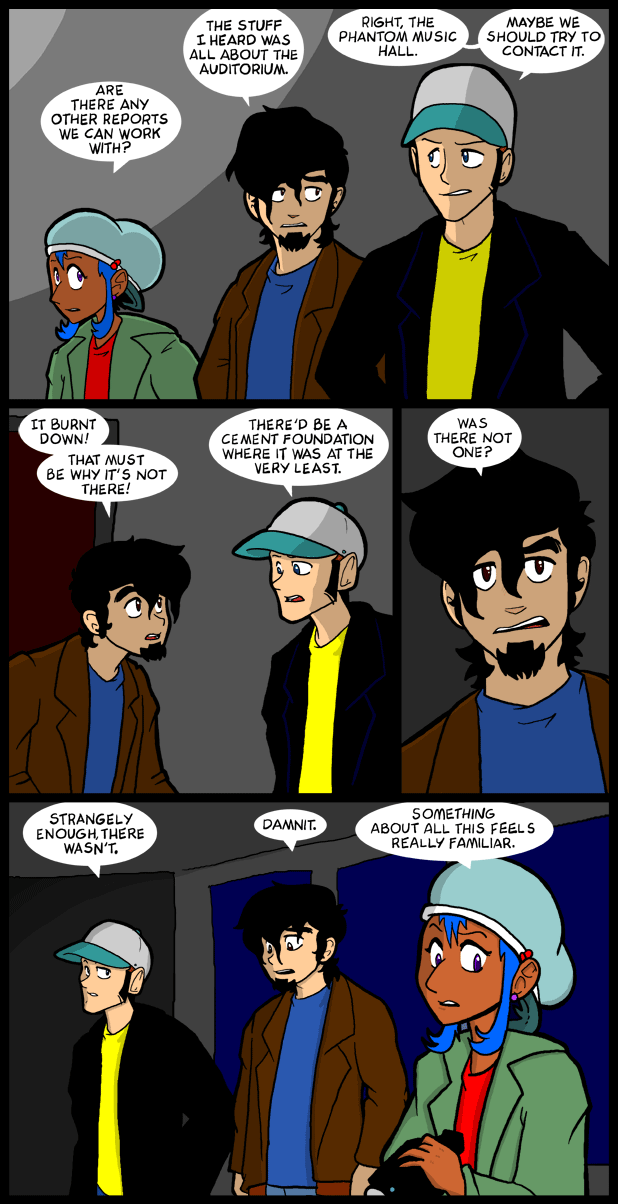 I think it’s safe to say that at least some percentage of my readers are versed in the old lore. I could almost compile a book based on the responses I got. Makes me wonder what other sorts of things you guys are knowledgeable about.

I decided to pick up Mass Effect 2 preemptively so I’d have it handy when I was finished with the first one. It’s been in the local store for as long as I can remember, but when I wandered in the other day not a copy to be had. That’s pretty typical for me. Something is ubiquitous until I decide I want it then suddenly other people want it too. I always wonder who these people are. Who in this backwards part of the country has tastes similar to mine? I will likely never know. Probably some random kids.

Back when I collected toys heavily I always wondered who it was that would beat me to the shelves. I don’t think in all the time I ever collected I met another person who did too. There had to be more than me, and I often saw collectors of things I didn’t like; Hot Wheels, for example, but never other people who liked what I did. Apart from my one friend, but we usually stalked the shelves as a team. Had we ever met we may have become friends, or perhaps bitter rivals, in either case it would have made the whole affair more interesting.

Anyway, when I got home I found Mass Effect 2 for half what it cost in stores, so I won out in the end.

You know, I actually do remember something sort of like meeting a fellow collector. One time I was buying a random Dragonball Z dvd and a guy noticed and started talking to me about it. He was probably a little younger than me, but not too much. I was instantly a little creeped out. In fact, I wondered if that’s how I came across to other people. I rarely interact with others in a store, so probably I creep people out in a different way. In any case I learned a bit about him in those few moments, like he was married and had some amount of kids already. So it’s not like he was some sort of pariah that no other human would interact with.

Maybe I was just put off because he interacted with me and that put me on the defensive, or I was already in a bad frame of mind. Those were dark days and my sour attitude may have been coloring my perception of things.

I’ve never made an effort to make friends with anyone out here because I judge people as inferior long before they have a chance to make a case for themselves. Knowing full well that’s not an appropriate way to deal with others. i just assume that no one is going to understand anything I have to say, or anything I do, based on past experience. For all I know there may be a vast network of underground nerds just waiting to embrace me.

Perhaps they have the wrong school?

I bought Dragon Age 2, and they gave me a downloadable copy of Mass Effect 2 for free. Too bad my copy of the first Mass Effect is for the 360 and the second one is for PC so I can’t transfer my ME1 save data.

Especially since the default version of ME2 happens to involve the exact opposite of every decision I made in my ME1 playthrough.

Sadly, nerd life shows many tragic similarities to life of non-nerds. that is to say, we jockey and vie for position and rank the same as other groups, only our venues of combat lean toward the more intellectual pursuits of one form or another. Be it the professionals (you know, the Rocket Surgeons. Sure he’s a brilliant Psychoanalyst, but he’s no Freud or Jung…) or the more pop-culture oriented (nice little short film about it. Welcome to Eltingville. Might have that misspelled, or misnamed. Brilliant little short piece about a set of particularly vicious little nerds…)

That being said, humans are a cliquish and insular lot. had I not seceded from humanity to join the more vicious and nasty plant kingdom I might be very slightly less depressed over the whole situation. If you really have any doubts about my claim, watch any polical debate featuring more than two individuals, ever.

I’m resisting the need to poke at one of the comments on the other page. I’ve been told not to engage in arguments on the internet as they are a “waste of my time.” -_-; Even more so when arguing about fictional critters that I’m not 100% on, either… (but I know they‘re wrong…)
http://xkcd.com/386/

Well, if I’m the culprit, Spam away. I come here to learn. But if you’re wrong, be prepared to get schooled.

There’s a guilty reply if ever I saw one.

I live to enrage trolls. Connecticut wants to re-institute Troll Booths on our major highways, just because of me.

Manekochan is by no means a troll. She’s just a concerned citizen.

It’s not you and, after reading your post, it occurred to me that they might have been a troll. I have a difficult time ignoring them.

Makes me wonder what other sorts of things you guys are knowledgeable about.

You’d be surprised. You’ve got the attention of an alarmingly intelligent bunch of web denizens. They’re safe enough, as long as you keep them entertained; but don’t turn your back on them. Or bore them. Or feed them after midnight…

If it happens to be me you want to poke, please do so as well. Unlike the perfesser, I don’t come here to learn, but I do like to make unverifiable statements on a fairly regular basis and decry the mistakes of others. Generally I like to do this after giving misleading, wrong information about completely unrelated subjects. However, I is not a troll, I.R. Baboon.

Okay, Ima troll… Just sexier than the average troll, and most of that, even, is due to an awesome hat…

Damn, wrong chain… Really need to pay more attention one of these days….

It’s not you, so don’t worry. And I’m not trolling. I wanted so bad to argue… I typed it all out and stared at it, looked up references, 16th century woodcuts, and, finally, I’m like, “this is probably just some damn Twilight freaking 13 year old… Damn it… It’s 4 in the morning… just let it go…”

Great satisfaction is to be had by writing up a well-documented lambasting of some mindless net-geek who so richly deserves it. Preservation of your sanity may require that you delete it before you ever click [Post]. Welcome to the Internet — the Home of the Brave, and yet the refuge of those too smart or their own good.

Ah yes, I’ve encountered everything you’ve mentioned while toy collecting. I don’t know how it works, but I think most people somehow miss all the other collectors, but still run into the void that they create. I never see ’em, but I certainly see the vestiges of the newest wave that they’ve taken! I think the way it works for me, is that most of the collectors around me are hardcore. They’re out in the morning and they get stuff right when they’re stocked. I get out if I feel like hunting (didn’t have the patience to do a good ‘ol fashioned hunt in a long while, until my wife got interested in legos) and then I don’t even hit that many stores. I think what killed my interest was that I just don’t want to try to beat the others. Too much work just for toys. So, I play it casual and I get what I can and leave the rest.

Then of course, like you said, I’ve only ever run into people that collect the stuff that I don’t; like hot wheels. Sadly it ended up being the absolute stereotype that people think of when they think of someone who collects toys: it was this GIGANTIC dude with a funky odor and a scraggly, creepy beard. I don’t know how I ended up interacting with him, but – true to the stereotype – he didn’t stop talking. I do like toys; so much so that I talk about them on the internet ‘n such…but I don’t like them THAT MUCH. Not enough to talkandtalkandtalkandtalkandtalk. I don’t remember how I cut the conversation off, but I know I gave up and got the hell outa there rather than check the other isle like I had planned.

Anyway, like you did, I sorta hunt with a friend, though his new job doesn’t afford him the time that he used to have (and heck, I don’t have as much time either). Now we just text back and forth if we find something the other is looking for, and manage to swap toys or pay each other when we get the chance. Then, like I said, my wife got interested in legos, so now I’m sorta hunting with her. It’s funny, though: while I’ve barely run into anyone else that collects in all my time collecting, the short amount of time I’ve been hunting with my wife we’ve run into two lego collectors. They’re a good lot, so far! ‘Course I’m only a collector judging collectors…but what’s life without being a judgemental prick once in awhile?

The vast underground network of nerds waiting to embrace you out there IS inferior to you; your judgement is correct in this regard. The question then becomes: is it worth your time to seek them out for interaction anyways, if only to satisfy your curiosity, or are you satisfied enough without meeting them in person?

If you do end up looking, remember that it’s very seldom that a person is afflicted with merely one form of nerdiness. If you find a local college with an anime-watching club, it’s likely that some of them play Magic: the Gathering. If you find a local tournament center for Magic, some of those people undoubtedly play MMOs. And so on. The import of these facts is this: even if there’s no large group around for your particular interest, a large group formed for some other interest is more likely to contain someone who shares your interest than a similarly-sized segment of the background population.

Gee, where would you find a bunch of misfits like that? I bet they sit at home at night and read webcomics. And how would you ever interact with them, if you should even want to? You’d probably have to give them something to feed their peculiar addiction. Create a whole world and people it with engaging characters for their enjoyment. Why would anyone want to go to the trouble for such fickle fans? Knowing full well that you are likely only one amongst many others, and that they likely occasionally skip yours. cause like they usually save it for last and sometimes forget or just submit to slumber as the clock climbs into the AM hours…………………..

Wow you should probably just move.

@Perfesser Bear’s response above a few posts back…
Why do I get strange images involving weeping Doctor Who angel statues at that remark?
Are you putting smart folk on par with Weeping Angels.. cuz if so that is awesome and I’m totally game for attempting to pretend I’m smart enough to be considered one.

“Don’t blink, don’t even blink. Blink and you’re dead. They are that fast.”