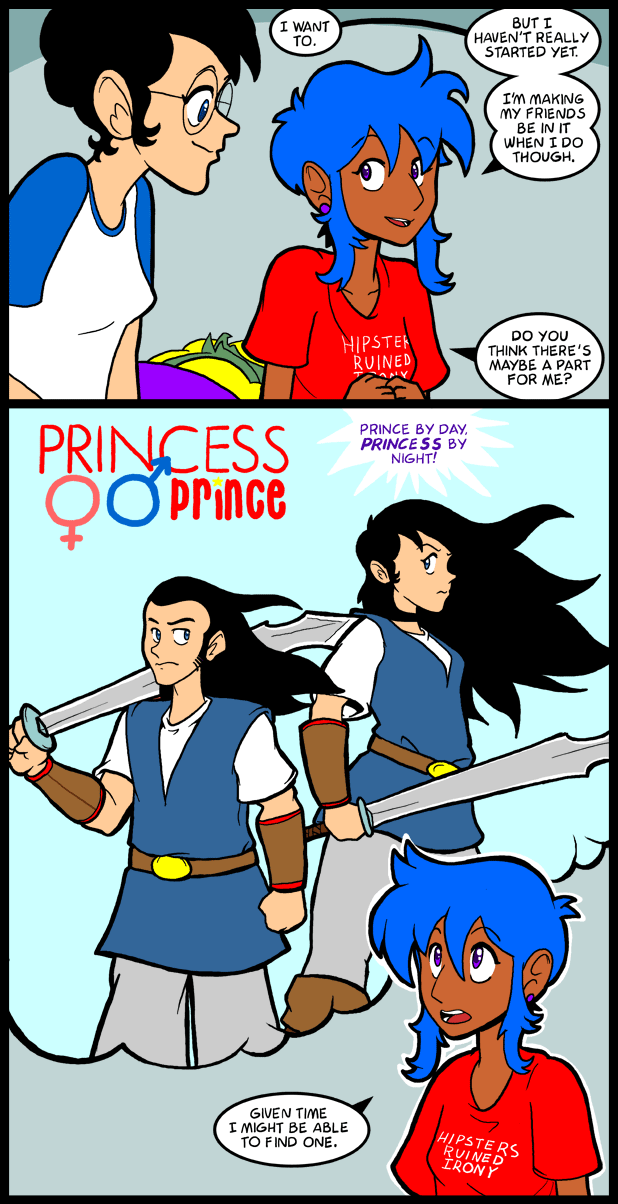 For the record, and because I know you’re all sitting on seat edges waiting to find out, I had a lovely birthday. I saw my Grandpa and watched Sherlock Holmes with my parents. I also got to see my sister a few days ago, which I’m counting as a present because I don’t get to see her very often. I also got my, I guess, traditional birthday image from a friend. 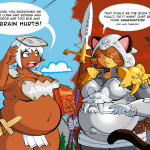 Since this is a present for me this image probably doesn’t make much sense to anyone else.  These are characters from another series I’ve been working on for a while now.  Two of many neglected persons from my brain…  On the left is Maddison Lewis, the somewhat simple friend of Alexandria Melvil, on the right.  Their taste in, and understanding of, books differ.

Anyway, the vision in this comic is kind of inspired by an old cartoon I saw many years ago. It was about a princess who had to pretend to be a prince for some reason or other. I can’t think of the name, but I’m certain it’s the brainchild of Osamu Tezuka. I only ever saw a couple of episodes, so I don’t know what happened, or what the full premise was. Strangely I think I could appreciate it more if I saw it now than I did then, but it must have left some kind of impression, as I can still dimly recall what little I did see.

I’m not thrilled with the top panel because it’s harder to tell that Jess speaks after Jo. I hated to slide the text around any more once I had an image I liked. If ever I think of a better way to depict the scene I may change it…

Much humor springs from suffering though.

And those people need to realise that there are much more serious issues out there than feeling uncomfortable in the body one was born in.

That said, I also know quite a few trans people who really enjoy trans stories like Ranma 1/2 and stuff, even though others feel that those sorts of stories belittle the problems that trans people have.

But most of the trans people I’ve known learn to not read the comments made by others online relating to any such story.

Honestly, I’m a bit sorry to say that I would probably watch that movie…at least once, and not just because Jo made it. Damn, watching Syfy channel movies while bored at 2 AM really does have a negative impact

I too would watch this movie.

I three would watch this movie, especially so if Jo made it. And those two really would be perfect for the title characters. So it makes all the sense in the world for this to be Jo’s movie. :D

And let me not forget to point out that they both look awesome in those costumes. :D

I’m glad you think so. I was worried they were too plain.

Well they would need to be unisex… so there is that.

Also, i was thinking that image had something to do with the movie “lady hawk”

Ladyhawk is a fun movie. This only has one person switching sides though.

Aww man, if it was announced (pre-bday) that your birthday was coming, I totally missed it – for which I apologise. Happy birthday sir! To where should I ship your present? (ok, there’s no present. there is a chance of perhaps a used wet-wipe though, if that’s of use).

I agree with Cody, I definitely thought of lady hawk. And of shrek :)

Cause they have layers?

This is a lot like reverse Maze as well, where throughout most of the series, the main character, Maze, turns into a guy at night, who happens to be a massive pervert, very strong, and protective of those close to him. She starts out almost the opposite, but gradually becomes far stronger.

It’s a very common theme. Individual spin is pretty much all anyone can hope for now.

Dawwww….I just wanna snuggle her when she has daydreams like that <3

Just giving you heads up, your images have popped up to Photobucket.

What images? Where? This information helps me in no way.

that is an epic idea Jo!

The opera you are referring to is most certainly Princess Knight by Osamu Tezuka, titled Choppy and the Princess in the States, and “Princess Sapphire” in my own home country. It is a quite fine piece of art indeed, one of my favourite from my youth.

Ah, I couldn’t remember the American name. So typically terrible of the time. XD

Happy birthday, dude, and many happy returns. Sounds like this was a good one.

I dunno. Call me a sick, crazed pervert (“You’re a sick, crazed pervert!“), but this episode put me more in mind of Ranma ½, but that might be because I’m a fan of a lot of Rumiko Takahashi’s work (we were born the same year, but I’m three months and a day older — and I know that just mentioning that sent somebody to Wikipedia.

Incidentally, aside from Jo hitting it off so well with Jess, I think this one is memorable for getting so much dialogue out of our shy, violet-eyed movie maven.

–Perfesser,
Goofing off on Vacation this week.

You know, now that everyone is bringing it up, I notice how much gender swapping has been used in popular fiction. I never gave it a lot of thought before.

Anyway, yeah, as the story moves forward and Jo becomes more at ease with herself she’ll find her voice. As I’ve commented elsewhere, I think she had an easier time talking to jess because she looks so much like her brother, and she just cane in from the outside and a mini panic attack. I think it’s safe to assume that she is deeply chemically imbalanced.

I still say he draws the best hair ever. I dare you to try and convince me otherwise.

I don’t know how you’ve done it, good sir, but Brooksie’s character design just keeps getting cuter. Two gold stars for you.

Victor Victoria meets the Princess Bride with shades of Ladyhawk. Would Reggie be Mouse? (Think that was the sidekick on Ladyhawk).

Man, It’s been so long I can’t remember. I can only think of Mathew Broderick’s proper name.

At any rate, Reggie would be an amusing casting choice.

I would TOTALLY see that movie.

That sounds like Princess Knight: http://en.wikipedia.org/wiki/Princess_Knight
(Or the Rose of Versailles, which I’m guessing was inspired by Princess Knight and which, in turn, inspired Utena… And was depressing as all hell, I might add…)

And someone mentioned who would play Reggie in a movie?… I always kind of picture this kid from Salute Your Shorts: http://img.photobucket.com/albums/v210/cameronic_soul/livejournal/pinsky.jpg
Too old now and too young then. ^^; Ah well. ^^

XD That’s not a bad match for his look. I was afraid you’d gone insane and were going to suggest the redheaded guy.

He’s from the second season. His attitude might have a little to do with it. I remember him being a bit of likable douchebag. He was far more smooth than Reggie, though.

I used to love watching Princess Knight, Tetsujin-28 ( Gigantor ) and Mach GoGoGo ( Speed Racer ) when I lived in Korea. :-)

Actually, I’m surprised no one’s brought up the anime Le Chevalier D’Eon, with the swords and the transgenderism. Loosely (and I mean very loosely) based on D’Eon de Beaumont, who succesfully passed as a noblewoman named Lia de Beaumont in Russia while spying, and was even declared a female by King Louis XVI (the 16th), but was found upon death to have been anatomically male. The anime had Lia be D’Eon’s sister who would posses his body to enact vengeance on her killers.

I forget all about that one. I’ve only seen the first dvd. I liked it. Can’t remember why I never rented the others…

Jess and Jo are sexy.