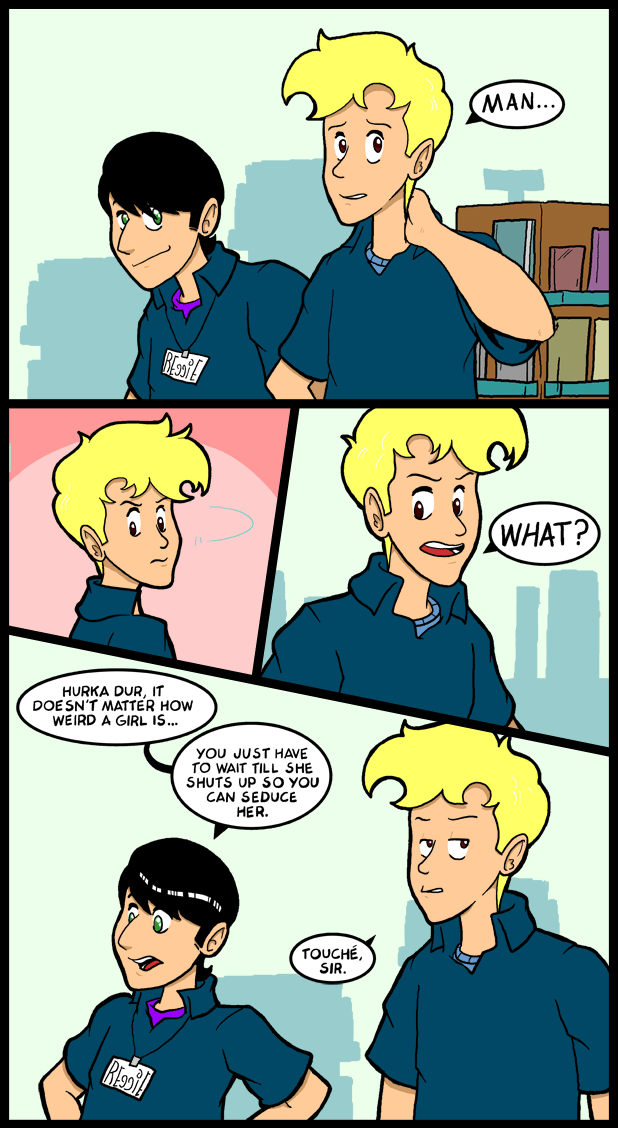 Somebody asked me to make a shirt like the one that Nina lent to Reggie, so I did. It’s in the store link up top. You can only get the right color in girl styles though. Which makes sense in the context of the comic. X3 I don’t control the colors available so that’s as close as I can get. You can get the emblem on pretty much anything though.

There was something else I was gonna tell you guys, but now I forget what it was.

Did I tell you I finally found some green Play-Doh? It’s cool. Not the exact shade I like best, but it’s green and I like that it is. It’s new, so it’s all different from the stuff I had already. They must have changed the formula. The stuff I have is from, like 5 years ago at least.

The new stuff is barely sticky at all. Older stuff would paste to your hands, but this new stuff isn’t like that at all. It barely adheres to your fingers even. Whatever makes it smell like Play-Doh is still in it though.

I love Brooksie even more now.

Dear god, Reggie was not only correct but he’s even still in the right. The end is near.

Even so, “Hurka dur” is not perhaps the most graceful way of basking in your correctitude. Especially when you are, to the person you’re saying it to, an authority figure.

Which is a long way of saying: “Even when he’s right, he’s still a(n) [insert suitably pre-watershed expletive of your choice here]”

@iggzy No, can’t be…it’s heavily snowing here and I haven’t hoarded enough food to survive a catastrophe like that…I’m so dead.

Well, iggzy, even a broken clock is right twice a day. It was bound to happen.

At least he did give the right reply to her after a while.

Any chance that the new style playdoh will start sticking to your hands after 5 years or so?

Why? Why did Reggie get to become awesome, if only incomparison to Wesley? WHY?!

If nothing else, you have taught me the true value of having that one friend you can always point at to make yourself look better. I shall never underappreciate him again. Except maybe during the facepalm combo x2 moments.

Actually, just the other day I had to get another friend so that I could accomplish a facepalm combo x4. It was I intense.

The best part is, it was at the expense of my pointee-friend’s pointee.

Also, the other day, I was walking across the connecting bridge between two buildings at my community college, and a bird FLEW across at about head height, superfast. I didn’t even have time to react until it was already gone.

Despite Reggie’s (unexpectedly) hilarious and accurate take on the situation, I still refuse to acknowledge either of them as higher on the evolutionary chain than whatever mold feeds on.

That would be dead stuff.

Wesley just got burned, and by Reggie no less. He’s lucky he’s the new guy and he doesn’t know just how bad that is.

Don’t worry, Reggie-haters. I’m sure when Wes meets Nina and tries his hand at her, Reggie will say and/or do at least one thing for Wes to get his own back. And then again when he meets Ed, who may try to help him out as a fellow new starter and give him at least some of the dirt on Reggie in the process.

Anybody who says it doesn’t matter how weird a girl is, has never seduced a seriously weird girl.

With some girls, you would do better to stick a firecracker in your ass and light it. Afterward you can say “Why did I do that?” and have a fewer second thoughts about the stupid thing you did.

He probably would have gotten somewhere if he had just continued the bit. He should have offered her money, power, everything she asked for. Then she would tell him she wants her father back, you son of a bitch. Then there would be stabbing. Or marriage proposal. Or both. When a girl says “hello my name is _____ you killed my father, prepare to die”, the correct answer is either the one above or “The princess bride, I love that movie!”

So very, *very* glad Wesley’s getting grief for this. Although, come to think of it, he kinda got off easy. I mean, could you /imagine/ how much Tom would’ve ripped him apart? Not that I’m saying I’m *glad* that he got off easy….

I still haven’t decided whether or not I like Wesley, but I’m starting to lean towards no.

Gotta admit I’ve never been 100% one way or the other, but I’m leaning more towards your direction as well.

Reggie may be an insufferable prat, but he totally dropped Wesley right there. He told the guy it wouldn’t work, gave him the told-you-so, and mocked him for his failure, pretty much like anyone else in the store would have. Perhaps not in the same way, as the others would have been warning Wesley not to mess with Brooksie or they would come down upon him like a ton of bricks, but the general formula remains.

My mom can actually recite that entire movie. The Prnicess Bride. Thought i’d throw that out there since i have nothing constructive to add to the conversation other than the fact that i really dislike Wesley, and have since he met up with reggie.

There is a kin of play dough that’s white that you can dye with magic marker by coloring on it and then kneading the clay. It’s also not as sticky as old play dough used to be but it might be easier to get the color you want.

jeez laweez, how weird can someone get.
on-purpose tautology AND a princess bride quote?

I didn’t think it was possible, but how does someone make me like Reggie? This kid is a god awful human being.

It’s amazing how bringing in a worse person makes a person you dislike so much better. I am almost beginning to LIKE Reggie now that I know that there’s a more despicable person around.