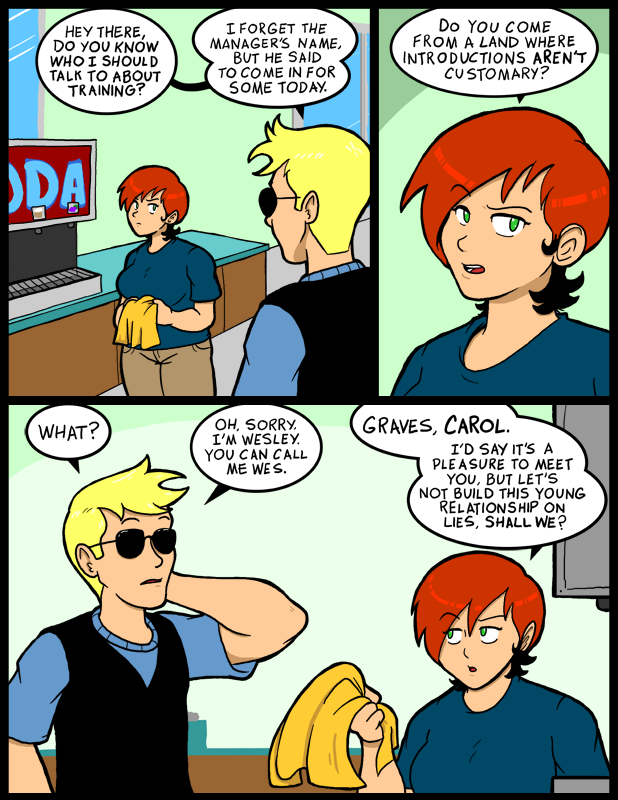 I’m going to be on the road Tuesday. I was hoping to get a bookend image done for Ed & Jessie’s story, but I’m not sure I’ll be able to. I may just post a sketch and finish it later like with the Carol & Thomas one. As you can guess I’m writing this post early in case I can’t get home in time to post it like normal.

It’s been a long time since this guy’s threads were woven into the tapestry, and it isn’t even his story. This stuff is just the lead in for something else. I only wanted to get him introduced so he’d be around for other stuff later.

As you can see I am trying out hand lettering. I waited a long time to give it a shot, but I can do it fairly quickly now, and it’s passable. Hopefully I’ll have the hang of it before too long. I think it reads pretty well and it fits the art alright. My terrible handwriting bleeds through a little, but you have to start somewhere.

I’m tired and have a lot to do. I would talk more, but I can’t at the moment. I will see you all later on though.

Ooh, bad start off. This is going to be fun, I assume.

Well look at that it was not just Edward that she yells at first meeting. Next thing she picks on him for is wearing sun glasses inside

She does…
Though she shouldn’t.
Even as a potential employee, that shouldn’t be any of her business.
As a dude who can’t go outside during the day without sunglasses, I get a bit uppity about the subject.

you seem rather uppity about a lot of things. I think you are single single-handedly driving me away from reading the comments…I thought I would enjoy re-reading the archives and the comments, I’m rethinking the latter though.

This must be the Wesley that Steals stuff.

Oh yeah, I totally forgot about that!

That’s RIGHT, the Hiree that Mike went and forked over, lol AKA the mess that Tom has to clean up.

Is it strange that I aspire to be as forthcoming as she is? I think these thoughts in my head and if I could just work up the courage to SCREAM AT THE STUPID PEOPLE SOMETIMES I probably wouldn’t be as consistently sharp-tongued as she is.

I’ll bet you could get good at it if you had practice. The thing is you can only get away with this if you are really good at your job. Otherwise people start gunning for you.

Okay… I want him to be blind. Really.

I’m gonna miss the specific fonts of each character :(

Give it time. I have to learn to do it at all first.

He could have just replied “yes.” That would have put her on the back foot…

Hardly. You don’t get to Carol’s level by being shut down so easily.

He shares my name! Hopefully he isn’t a dick. :P

Prepare to be disappointed…

Carol’s actually being sorta civil to someone who came in rude. Interesting.
The hand lettering looks OK, but I think you’re going to want to use some guide lines to keep the words from wandering around the speech bubbles. Keeping the letters sitting on a straight horizontal base does wonders for readability.

T^T Yeah… that was what I came up with using guides. You should have seen the mess before I thought to do that…

So, Mike will eventually emerge and finalize his training?

“Welcome to the team….. Wesley”

Maybe that someone… is you.

I like where the hand lettering is going. The way the words that need stressing are slightly darker than the rest works perfectly. It ends up reading easier and more accurately. Also I don’t think hardly anyone else does that so you get points just for that.

I tried to make it so you could guess at how the lines should be delivered.

I love that his name is “Wesley Asel”…which sounds a lot like it was derived from “weasel.” You know when you hire a dude named “weasel” that you canNOT turn your back on him.

Yeah, a couple of people gave me shit for his surname, but it’s real.

Lettering looks good. Looking forward to seeing how this develops.

I’m trying hard to make it look good. If I’m in a hurry it suffers.

I have a feeling he’s going to continue to put his foot in his mouth for every introduction.

As for the hand lettering…… I gotta agree with an earlier commentor, a straight base line would improve legibility greatly.

T^T It’s so sad that I used guidelines already…

Maybe a guideline for the top of the letters too then?

i don’t rly like the hand writing is was very distracting. i kept getting lost on the page.

I apologize. It’s the best I could manage. It gets better tomorrow a little.

If he’s such a thief, he’ll be charming and outgoing, as to make himself likeable enough to be trusted….

Can’t… take…. eyes… off sweater-vest…. No, it shouldn’t be that distracting to me, and yet it is…

Just give in to the sweater vest. It’s powers are great.

I like the new lettering, keep it up. I’m terrified of doing hand lettering, but i have a lot of really good fonts so there is not much of a need.

It seems like a good skill to have and plus you don’t have to credit anyone for shit. Which appeals to me.

He reminds me of Albert Wesker from RE.

@anonymous, wow i wasn’t the only one who thought a dorkier looking version of Wesker

I don’t know if it’s because I know you’re an mspa fan but when i saw this comic the first time I only saw “blonde hair and shades, Dave Strider shoutout”

I’m pretty sure this was before I read Homestuck.

He steals things.
And his name is Wes.
Pokemon Colliseum, anyone?

It’s been ages since I played that. Was that the Gamecube one? I don’t remember there being a Wes.

Wes?
I was expecting him to say his name was Brent Sienna.
Amirite?

He seems to have infected Carol with his font. Or is she perhaps mocking him?