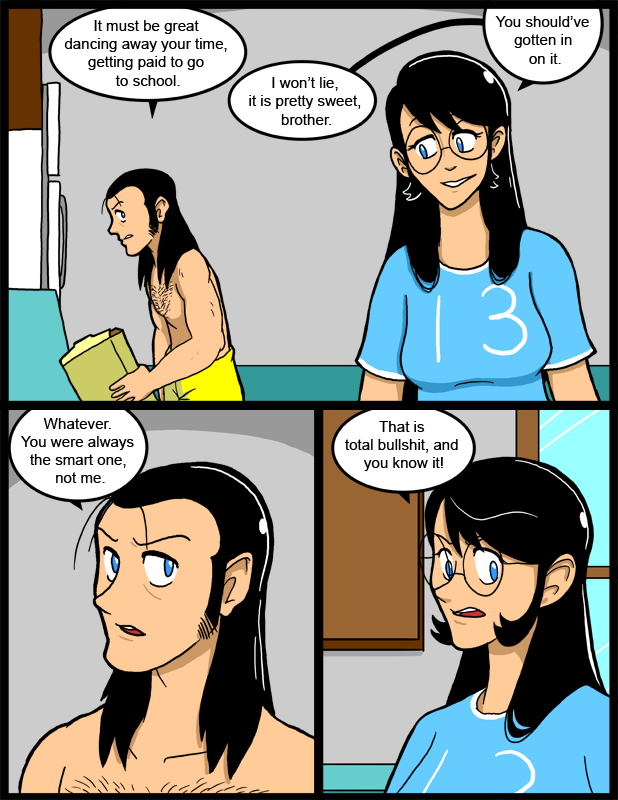 I didn’t get in to The Sims when it first came out. I think I started playing with it around the second expansion. I cheated, of course, because the game is fairly boring without lots of money. One of the first things I did was make Sims of my roommate and myself, then built a version of our apartment to scale. I suppose it should come as no surprise that they were miserable in it. I kind of started judging all my living spaces in Sims terms after that. Knowing, in the back of my mind, that I was living so poorly that if I were a simulation my cursor controller would be thought of as cruel.

After a while I built a mansion around the original apartment structure. The Sims never ventured into that part of the mansion ever again.

Eventually I found out that if you keep the remains of a Sim on your property there is a chance your house will become haunted. This knowledge resulted in a spree of murders the likes of which would be worthy of a Showtime original series. The mansion ended up with a complete graveyard, like really old houses where the family was just buried out back. Except that it was filled with an entire town’s Sim population. (Also mailmen, deliverymen, firemen, & anyone else foolish enough to answer the phone.) I suppose it goes without saying that the mansion was quite haunted. I also had to close off the cemetery gate because if the surviving Sims could get inside they spent all day wandering around it, weeping.

In retrospect I realize this sort of activity might have been a cry for help. <_<

I never played any of the new Sims games. Which is probably a good thing. For me and The Sims.

Wait, you mean that isn’t the point of the Sims?

Well, I’m not sure that’s what Mr. Wright had in mind…

Yay for building walls around them! The Sims must suffer! It makes me feel better about my life when others suffer more than me.
I must say, when I started reading the comic I had the feeling I should clap twice. Not sure if you meant for it to be so close to the Fraggle song’s one line.

You mean the theme song? That’s a bit of a stretch.

Seems like Ed has some self-esteem issues there partly resulted from being picked as well as his intellect. I hope his sister and Nina can talk some sense into him. Not that he needs pity but just to know that there are those who truly care about him for who he is and not what he has.

Stay tuned to this station to see what happens! XD

Methinks that 13 on Jessica’s shirt has some deeper, hidden meaning…

At least you weren’t like me and tortured them into a cruel and horrific death… Oh wait.. That was really fun now that I think about it. Actually my favorite little item for the original sims was something called a Flaming Moe. Yes… it was the most evil and angry pink flamingo one would ever come across. If you stared at it, it would burst into flames and burn the area around it. Horrifying if you put your sim in an entire house of these. Let’s not even break into the electrocuted urinal. That’s a whole ‘nother can. Just saying that your mighty ways are appreciated and respected. ^.^

I don’t remember that item. Man, that would have been a lot faster than walling them up. I liked using the pool exploit when I could get it to work, because it was quicker. You had to get them to a point where they would swim with your Sims though, which was sucky.

Well I’m a big fan of downloaded items. Some of the Maxis stuff can really sucks especially when the game is capable of holding things of greater fun and detail. The swimming cheat was always hilarious to watch as they slowly grew tired and finally drowned. I had a laptop with the original Sims and me and a group of my friends sat in a Subway one day, killing sims for hours until they finally kicked us out. Or my battery died. I can’t remember which. It was an awesome day though.

I downloaded a bunch of stuff too a long time ago. A lot of those sites are gone now, but when I went back later I was surprised that a few were still up. It was a wild time warp kind of day. XD

I built a two story building. Made one door. One set of stairs. And made every available panel a fireplace. No Smoke detectors. Just a phone. As soon as the house caught fire. Door is gone, wall with fireplace there instead, and called the fire dept. It was funny watching the firesims try to find a way into a house with no openings other than chimneys,

XD I never thought to do that.

That is the most entertaining thing I have read all day! I never got into the Sims purely because the Sims were just too…needy. I tried playing it once, but it seemed that every other minute, one of my sims was on the verge of wetting themselves. Ha ha!

Yeah the original Sims are like little pee machines. They need a bathroom every few minutes. By the time they are clean and ready to go out they have to go pee. I always thought it was odd that the first thing a new friend would want to do was use the bathroom in your house. That’s way down the list in real life…

After a crazy move, I was finally able to catch up on all of my comics (this one included!)

Yours is still, without a doubt, one of my favorite comics! ^_^ Gotta love the twins. I have a pair of fraternal twin cousins who act very much the same way xD

I remember devoting hours to the Sims several years ago >_> There were of course Sims of me and my friends. We didn’t like each other nearly as much as Sims as we did in reality. But that may have been because we all lived in the same Sim house. I just remember one Sim having a baby at one point and child services eventually taking it away -.-

Anyway, hope your weekend is awesome :]

It’s going alright so far. Could be better.

It was hard getting Sims to get along sometimes. Usually I made them so that one was friendly and sloppy and the other was super clean and friendly so one spent all its time too busy to fight with the other one. XD

Hmm… Simicide. Several years ago, I used to do computer maintenance for a work-friend. Her son was heavily into the Sims (I almost screwed up a semester of college over SimCity, so I could relate). He liked to lead the Sims into alcoves and closets, then wall them up. His greatest joy was watching them wuss their lives away — I didn’t know that Sim-houses could be haunted, so this reminiscence was educational.

A few years later, I sent him a copy of Edgar Allen Poe’s The Cask of Amontillado. He thought it was awesome.

And that’s the story of how a serial killer is born.

Ah yes, sims-torture, that brings back memories. My most inventive way was to put them in a 1×2 room, with a counter and a food-providing thing on the counter. It’s been to long since I played to remember which one. The results after I trapped them in there was that they could eat all they want, but they’d always mess themselves and be forced to sleep standing up. The best part, the walls were panes of glass, so they could see through, and others could see them, and if they had any common sense, they’d just break the glass and be free.

They should make a game where the point is to creatively kill the Sims. Make it all about dangerous workplace environments or something. I bet people would play the Hell out of it.

there is a game kinda like that. Adult Swims Kill yourself in 5 minutes.

I think someone else said something about it too. It’s somehow different when it’s you controlling a guy directly versus prodding one along that has a degree of free will.

It is different, I’ll give you that, but the effect is much the same. death is definitely involved. XD

Have u ever heard of 5 mins to kill yourself at adultswin.com? never tried it but it sounds like it would be up your alley guys, never got into the sims either, im not good at babysitting type games, or crap like the escort quests in games, i gotta waste my time watching this slow sob move, talking more to him/herself than me, then some dont help when ur under attk, and they dont stop for mana breaks, i could go on but meh, boring myself at this point

oh yeah, i just got thru the backlog of ur comic, it is a great one, moar jo plzzzzz

I never understood why their hygene went down when they deficated… I mean did they piss all over themselves every time, or was the strain of sitting on the toilet enough to make them sweat buckets? And what selfinsh materialistic sim could be literally dying of depression when they have a bowling alley AND a swimming pool AND about 4 mistresses?

as your creator and god, you must command them to use such frivoloties. otherwise they become stupid and base with the inability to fully complete themselves with the satisfaction of fun, love, and perfect hygiene. which reminds me, I now must take a shower.

I hate to be the one to point it out, but there was never any toilet paper in the sims for the girls and guys have the two shake rule. Something got on their hands, which is why it was always so important to make them wash after using the toilet.

Having never played the newer ones I’ve wondered if some of those issues were ever dealt with.

Hooray for being lonely with someone else!

I used to have a time out room that I would box a Sim into if they were misbehaving. Its only features were a comfortable chair facing a clown painting on the wall. Contemplating this creepy visage would presumably remind them of how good their life really is, so they would behave.

It seldom worked, but it was still good times.

That’s fucked up. A friend of mine used to do the same thing. XD We also had a room with a moose…

I donno why, but in panel 3 I feel like Jess should have the tips of her canines showing. Is Jess going to become a vampire?

She is so sexy