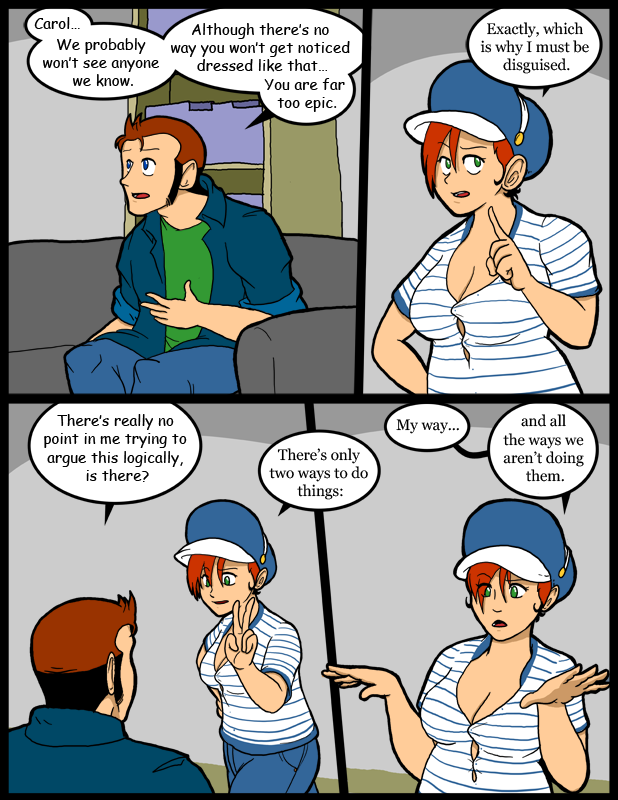 Just in case anyone was wondering, Ranma 1/2 doesn’t end.  It stops.  Which is fine with me.  I understand why she had to do it that way.  When your franchise of products and films ride on the strength of a premise you can’t cut the legs out from under it.  People will stop caring once you nail down what happens.  Ranma and the gang will go on fighting each other forever, but at least I don’t have to buy any more books.  XD

I’m going to look in to what all managed to get published from start to end of hers in America.  I watched a little of Innu Yasha and it was pretty much the same sort of thing that I liked about Ranma, or anything else Takahashi has done.  It seems like a story that should end though.  Like there is a definite goal that can be achieved.  I may be wrong, but I can handle that too.

Yep.  #10 wraps it all up.  I can finally get it and put Hellsing behind me too.  About damn time.  There is no way I’m getting a happy ending out of this one though.  XD

I should just start  finding out what all old series I have part of I could potentially put a nail in.  Battle Angel comes to mind.  I read all of it, but an old girlfriend had the books.  I’ve got the end run of single issues kicking around, I think.  Not as good as trades.  Trades are the best way to read comics.

Anyway, to the internet!

Carol’s body language as she answers Thomas’ question in the last panel was wonderful. The answer to the question itself was a great retort in itself. I applaud your wonderful artistry and writing skills.

My favorite Rumiko Takahashi work is still probably Mermaid Forest. It’s different, darker than most of her other work, but it really hits all the right points for me.

That one was too creepy for me. I don’t think I even read it all.

Just thought i should say that InuYasha DOES end..
it just took a crapton of years..
They recently did a final 12 or so episodes in Japan that ends off the series from about where it left off..
when it’ll be translated though i dont know…it has subs if you are interested in looking.

I’m more into the books than the shows. I’ll try a few and see what I think.

reminds me of the song “My way” by the sex pistols.

Not familiar with their body of work.

That’s actually not the Sex Pistols, but solely Sid Vicious, and he’s covering Frank Sinatra’s “My Way”. So much facepalming right now. :/

noticed the different art style on the last page, used different perspective and even line curvature, and… in general i love the way it pops out, not merely pun intended….

My art is in flux as i learn new tools. XD

I like the Manga Ranma 1/2 better. Not to spoil it, but the end was pretty much what I had envisioned it. Also, as a whole I liked the manga better for its storylines and eventually artwork. Ranma vs. Ryoga battles in the beginning were my favorites.

And is it just me or is the buttons actually getting stretched more the more aggravated she gets? Apparently yes I am starting to get an unhealthy obsession with her buttons.

You’re not alone in your button obsession at least. Her shirt is kind of twisting around from being ill fitting. I even drew the collar messed up. Not important, just a thing I tried.

I love her expression in the last panel!

And yes, Hellsing has ended. I literally finished reading it yesterday. Yay for the library :)

If I scrounge up a little money I’m going to get the last book.

A lot of people seem to be liking that last panel today.

I’ve been waiting for Naruto to end…. The only reason I still read it is because t’s in Shonen Jump. Seriously, when the bad guys have a better plan for world peace than the main characters, it’s time to stop.

I’m getting the trades, but it looks like the story is taking another dark turn again now that Konoha has been destroyed for the umpteenth time.

I read Battle Angel Alita, I hope I’m not giving anything away, but it does have a good ending. Lot of shit happens though, lol. Inuyasha does end, Viz released 26 episodes something during the first half of this year, the last ending about the time I moved to Oregon. Manga’s though….I have no idea.

You ever read Black God? Good series, should check it out! Waiting for the 10th volume, and because it became an anime series, it usually does take forever. Tck, any manga of great notoriety usually does turn into an anime.

I read all the way to the end of the first series, so i know how that part ends at least. I guess they rewrote part of it for the new series. I was kind of glad it was finished, but whatever. It looks like some of the books are out of print now.

I have my moments.

There should be a question mark in the third panel at the end of “is there”.

Sorry for the Grammar Nazi. I’ve been reading your comic for about half a year now, and I have to say I love it! I’m starting to pick up on some of the subtle changes and I love them. I only wish it came out more often, alas, some of us have lives to live. Anyways, thanks for all you do, and keep up the good work!

No, no, you’re right to scold me. I should be whipped… gently. XD I actually fixed that when I made this page the first time. I must have backed out of it at some point and not noticed.

Thanks for reading, I appreciate it. I wish the comic came out more often too. ^__^

Not sure it’s your thing, but I really enjoy the 3 books of The Vision of Escaflowne I have read.

I could never get in to Escaflowne for some reason. Lots of people I know love it.

meh, never liked the Inuyasha type-stories much, the storyline is wayy to simple….
stuff like Fullmetal Alchemist has a bit of intrigue, that interests me…
and then there’s your comic. now that, i just won’t stop reading.

Honestly love her pose and expression in the last panel. She reminds me of several people I know with a commanding personality like hers.

Well, a few weeks ago I finally watched the last of Urusei Yatsura…
Same story.
Almost 200 episodes… and barely anything resembling continuity nor plot progression. The art style changes slightly and a few other things subtley shift throughout… but otherwise…. nothing resembling a story arc whatsoever.

Count that as a good reason I’ll never watch Ranma.