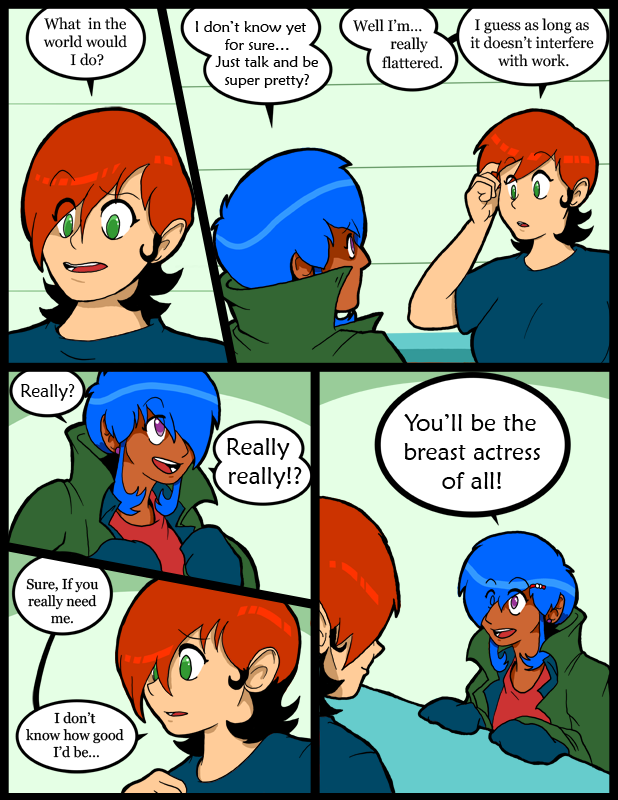 Sorry for not having anything to read right here. I was catching up on emails, and taking some time to color a sketch.  I’m not sure how this thing decides where an image goes in a post.  It keeps moving my text around.  I guess we’ll just go with it and see what happens.

Anyway, I drew this sketch of Nina in my actual paper sketchbook and then decided to color it.  Since my stories are so long I don’t get to play dress up as much as I’d like.  At least not yet…  There’s a big version of this you can ask for if you want it that bad.

Monday will be the 600th page.  Which is only a big deal if you like assigning importance to arbitrary numbers, but most comics don’t even get as far as ten pages, so that’s something I guess.

It looks like I have to write enough words to keep the ad embedded in the post from getting overrun by the image of Nina.  Something to remember in the future.  I’ll need to be more verbose if I want to upload an image.  Say a lot of words without actually saying anything, as it were.  I think I’m fully capable of handling such a situation.  Why use one word when twenty will do, right?

I beat Cave story twice already, but everybody died and I can’t tell for sure if that’s the way it should be.  I’m reasonably sure I can save more cast members somehow.   Plus the game is actually fun to replay, so I can do better next time.  Maybe I’ll look up how to keep people from getting killed all the time.  What I assume is the worst ending is actually kind of funny because you get a choice between doing the heroic thing or making a break for it, and unlike most games you can actually take the easy way out, dark side style baby.  I’ll let you guys know how things turn out, because I know you’re riveted by my tales of casual gaming.

I think that may have been hinted at a few hundred pages back, when she told Nina that wearing her shirt was like “being wrapped up in her all day”… or something to that effect. Also that she really liked the way Nina smells.

Hmm, I’m not sure it’s a case of going both ways. I think it’s…. oh what’s the word…. It’s a condition where certain senses trigger the release of way more endorphins then normal. I think in Brooksie’s case it’s smell. Like the way a feint wiff of a perfume or whatever makes you feel kinda good, for Brooksie it’s one step shy of an adrenaline rush. of course the adrenaline rush would have a similar affect on her. Translation: When she gets happy, she’s really really REALLY happy.

congrats on the 600th. im glad because this comic is my favorite and i read alot of them so thats saying something. please keep up the good work and i hope to see 600 more oh and thank you for all your hard work it really means alot to people .thanx!

If you type at the end of your blog post, it should automatically fix everything so you don’t have to type twenty words. Then again, it’s your post, you say whatever you damn well please!

Dammit, it cut off. It’s . Delete all the Spaces Between though.

Man. I really like their expressions in this page. They all seem so lively.

Look up a guide for all the counterintuitive stuff I mentioned, this post is long enough already

Makes sense to hire Carol, all epic movies need Large Tracts Of Land to work on after all.