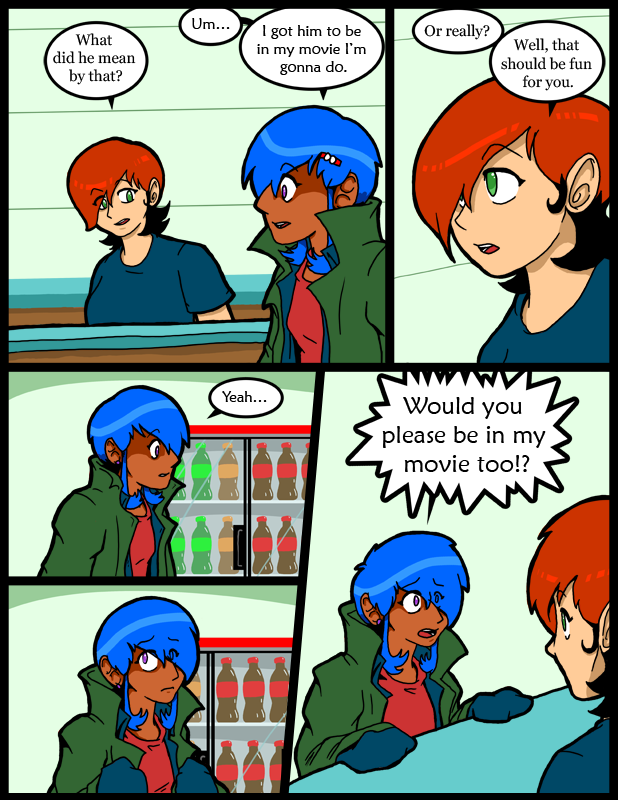 I had similar conversations with a few other comic making folk about ads the other day, that was started because an objectionable one appeared at the top of some of our pages. For the record, I don’t control the content of those ads directly, but that’s as may be. Here’s my take on objectionable ads: if an ad appears on my site that I don’t agree with, or fans don’t, I actually think it’s a good thing. The internet is set up such that a person can spend hours and hours on it and never see an opposing viewpoint. I should hope that if you see an ad for something that pisses you off you might actually take action and do something about it. And I don’t mean complaining to the operator of the site. Actually research the organization and do something to help the counterorganization that surely must exist. Getting an ad pulled from a site does very little to actually stop activity. All it does is alert the group in question to the fact that the audience isn’t receptive to its message. They advertise elsewhere, and then the legislation, or what have you, doesn’t get opposed, because the opposition isn’t even aware of it. If and ad appears to stop President Obama from doing some random thing, for example, it’s actually a victory on two counts. I get paid to show content to a crowd that, by and large, should move to stop that content. Essentially they are paying to alert they enemy to their plans, and that pleases me.

And now a note about the page title. Most of what little Japanese I know comes from watching anime with subtitles, so I learn it the way a baby learns. As far as I can tell onegai means, roughly, “please, I beg you”. I expect there’s more to it than that because, as far as I can tell, Japanese is a very vague language compared to English. So there is bound to be layers of meaning behind the word that I’m unaware of. If you are knowledgeable about the subject I welcome you to expound on it. I will ad your knowledge to my own and be better for it.

I once read somewhere there were four types of Japanese, I can remember three: Hiragana, Katakana, and Kanji. There is a fourth one based on Roman Numerals. The most common used type of Japanese is Kanji, because if it’s wide diversity of symbols; roughly 250,000 symbols in all. The average Japanese person uses about 80-120 Kanji in their average day. The average Japanese person knows only about a tenth of the Kanji in total.

I love knowing that, I’m still not sure why though.

I can only imagine where this new road will travel (Brooksie’s movie idea and her co-workers’ involvement).

I was going to expand on onegai…but really, this site says it so much better: http://www.aikiweb.com/language/onegai.html

how could anyone possibly say no to Brooksie ;]

Jo’ is as cute as ever. She can’t possibly get more Daawwww than this.

Also, the internet is a tool. What you do with it that matters really. Change in you what you hate, ignore what you dislike, see what you like, practice what you love. My moto. One of them many.

@ J.H. – the fourth is not based on roman numerals, but is a romanization of the japanese words. Katakana, Hiragana, Kanji, and Romaji are all different japanese writing systems. The hiragana and katakana function like the english alphabet, except everything represents a syllable instead of a letter. Kanji is a lot more complicated, with symbols representing words or pieces of words (or sometimes both. A single Kanji can have tons of different meanings). Romaji is simply spelling out Japanese words with roman characters. For example, onegai in the title of this page is written in romaji.

Onegai (also sometimes said as Onegaishimasu, depending on how polite one wants to be) does indeed mean please, as well as other things. Doozo yoroshiku onegaishimasu is the phrase you use when meeting someone, for example: it fulfills the same function as the English “Pleased to meet you”

When kanji are used, the kanji is often used for the word itself, surrounded by hiragana for grammatical inflections and postpositions. Postpositions are kind of like English prepositions, except they come after instead of before and they seem to be considered to be part of the word.