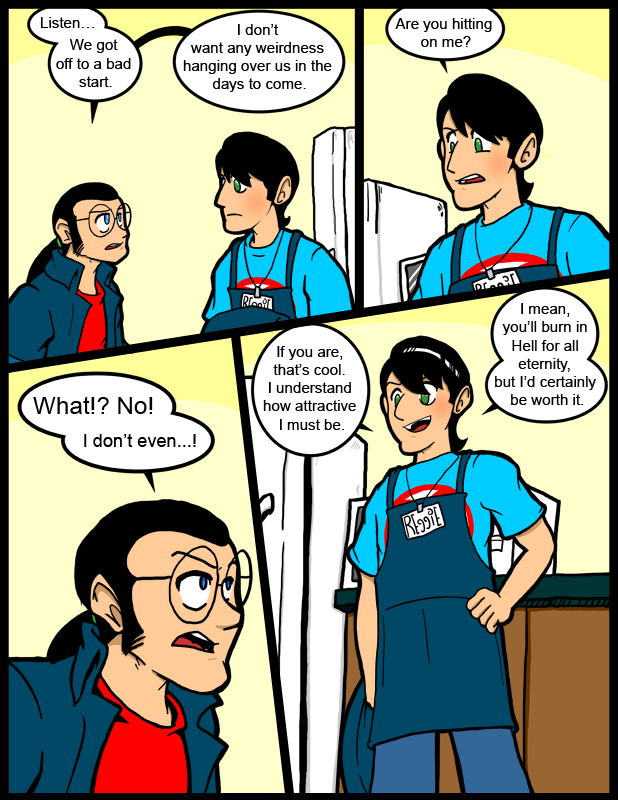 I had a dream the other night that was, basically, The Blob.  The premise was that a blob was absorbing everybody around, but it took place at a hotel, and an ice rink.  The blob couldn’t squeeze through stuff very well so you could be relatively safe behind a shut door, but it wasn’t affected by cold.  Which is why my ice rink plan failed.  It was me and this girl just kind of perpetually trying to escape the creature.  In some ways a bit boring, but there you go.

Everybody I know who plays Pokemon (And there are a lot of comic guys who do, much to my surprise.) is way further along than me.  I’m just barely past the part where you moisten a Sudowoodo and capture it…  if you don’t accidentally knock it out.  When do they find the time?

Anyway, usually when I get a new Pokemon game I complete the quest and pokedex and then move all the creatures to the newest game, but I don’t think I will this time.  I’m thinking that this time I’ll play to the end then save my pokemans and start over with a new team.  That is what I think the biggest failing is with the pokemon games.  There’s no new game plus feature.  You should be able to start over with a new team of guys after you get done.  Or at least the gyms should reset.

In platinum there’s a place where you can battle gym leaders randomly chosen every day, but it’s not quite the same as wandering around leveling monsters…

Of course for all I know there could be a totally awesome new thing at the end of Soul Silver.  In a million years, when I get there, I guess I’ll find out.

You’re further along than I am in Pokemon. And I have jack shit to do.

Apparently Reggie isn’t interested in playing nice. What an ass. I love it!

It is almost… Applaudable, how fast Reggie took the initiative to be a dick.

aaaand Pokemanz is the shiznat! But I can never finish a game.

I just caught the red Gyarados. I’m really liking these remakes, even if I did accidentally let my game time run up a couple hours while I wasn’t playing.

Well, from the context clues, it seems Reggie is a believer in the Christian doctrine…not a very good follower of it, but then he’s a failure of a follower as is, why not make that his all around skill? Can’t follow what he’s told, can’t follow the doctrine of his apparent religion, can’t even follow a high brow joke…

I’m further in Pokemon, but that is only because I am waiting for the part to fix my motorcycle to come in, so I play whilst whoever is my ride during a given day gives me a ride to work, college, and the like. Unfortunately, that gives me time to play that I don’t want to spend on the grind, so I’ve ended up at the final gym with a team of level 33-35 pokemon and the gym leader has level 38 and a 43….so now all the potions and healing items I’ve hoarded during the game (and the walker) were shoved down the throat of my most durable pokemon. My pretty dragonair <3

Also, I find it strange that despite gamefaqs and gamestop telling me more people buyed heartgold, everyone I know has soulsilver, I mean, sure I got heartgold only because the person who bought pokemon with me was in front of me and got soulsilver, but I really don't know anyone else with heartgold

Nice. Not only is Reggie a prick, but he’s a homophobic, zealous prick. *L*

As if the guy didn’t already have nothing going for him. Looks like he’s set up for a larger fall (And more falls) than I realised.

Now I hate him.

I’m sorry, but I HAVE to say this.
How DUMB do you have to be, to walk into that one?
>_>
I mean, any other NON-retarded person would say “Yes. Yes I am. Now get over here so I can give you a big smooch, Reggie-bear”. Because any NON-retarded person would know what Reggie meant by that, and that by saying THOSE words, you would’ve surprised him, thus giving you a chance to tell him to STFW.
*facepalm*

you know, I almost think this is Reggie’s attempt at an easy let down.

YOU HAD A DANGO DREAM!?

Cool, I guess. Anyway, still reading and loving the updates and so on.

I just realized Reggie reminds me of the villains from the speed racer cartoons.

Seriously, can we just beat him till he can’t walk? For life?

he forgot to include a racial slur in there… thats hilarious btw.

Seriously… Reggie is one of those characters you love to hate. He’s just an awesome dick hole.XD

As for Pokemon, I’m about the same place. I’m grinding right now to beat the ghost gym. I thoroughly wrecked it up till Gengar. Who then killed my Haunter and all my other Pokes. I’m really surprised at how balanced the levels of my team are. I’ve never done that before.

Reggie is hilirious. He is just so hatible that its funny XD

He actually does similar things throughout the story, with mixed results.

Hello there my buddy! I wish to state that this information is awesome, good prepared and will include somewhere around most substantial infos. I will observe additional threads like that .