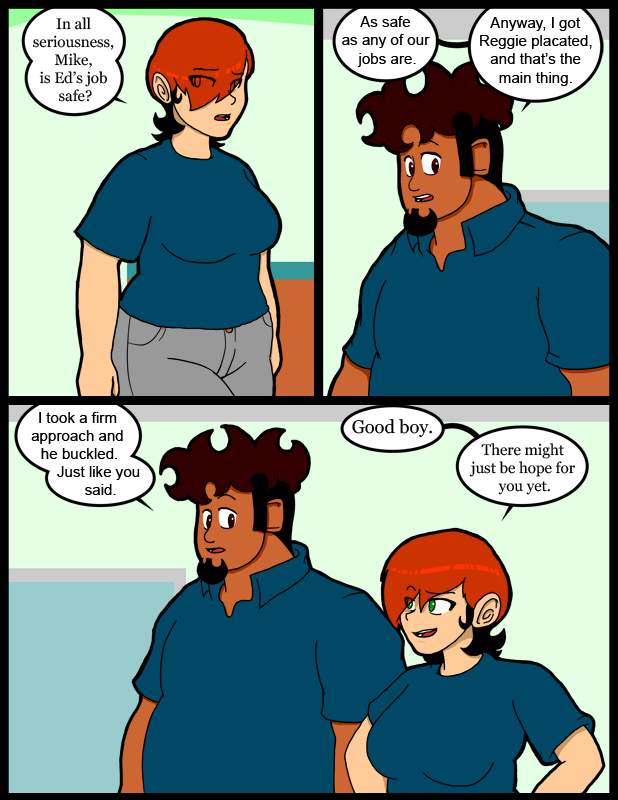 Many thanks to those of you who threw me more tips for my quest.  I appreciate it.  If I get anywhere on it I’ll let you know.

I only remember a tiny scene from the dream I was having when I woke up.  A wall covered with square windows all the way to the ceiling and part of the roof.  Looking up into the stormdark sky as lightning races through the clouds.  That’s all I have left of it.

Rather than spout a bunch of random stuff I’m going to point you at a couple of comics I enjoyed recently.  I expect some of you have similar senses of humor, so maybe you’ll find something worthwhile in them too.  Before I link you, however, a warning:  If you dig any deeper than the comics themselves the possibility exists that you will see some of the darkest parts of the Internet.  Parts that I wish I hadn’t seen, which is saying something.  I assume the bulk of you are adults and can make the choice to delve on your own, but when your eyes are bleeding, and you wish you could unknow all the things you’ve learned, remember that I warned you.

In fact, some of that stuff is right in the comics too so…  I guess what I’m trying to say is ‘no pussies’.  And when I say ‘no pussies’ I mean no weak people, there may be actual vaginas in, and around, the comics in question from time to time.  I don’t pretend to be an expert about these things.

Firstly, Guttersnipe! the tale of an orphan and her rat friend.  It’s more than that, obviously, but you get used to shortening explanations after trying to explain your quirky slice-of-life comic about the employees of a superstore who never seem to serve customers and are totally absorbed by their personal drama for the 3.5 millionth time.  (Usually ‘it’s kind of like Empire Records/Clerks’ is what they get now, by the way…) I get a kick out of the historical references mostly.   Guttersnipe! is just starting so now’s a good time to jump on.  Hopefully a little support will lead to it actually continuing rather than burning out after 60 pages like a lot of comics that have hurt me in the past…

Secondly, (I do that firstly, secondly, thing a lot it seems like…)  we have Murry Purry Fresh & Furry.  As the title suggests, it’s about anthropomorphic animals.  The main character works in a porn store, so that’s where the tone is firmly set.  It gets pretty intensely satirical a lot of the time, so if you’re of a delicate, or easily offended, nature just walk away.  Murry Purry is not for those with a stick up their ass.  All of the stuff that the world in general hates about furries is represented in one way or another.  Those of you capable of enjoying Murry Purry, who also make comics, will find more there to enjoy, or possibly despise, than the average reader.  There are many references to things that most people aren’t going to pick up on.  There’s a sort of Futurama like feel to some of the jokes.  Like how the Futurama guys threw math jokes in to the show that they knew only a few people would get.

So, there you go.  Some things to maybe help take the edge off of the scathing misery that life often dumps on us all.  XD

Yay! something else to placate my humor lobe while i wait for my next dose of Between Failures XD

Oh, Carol you should have asked how he placated Reggie…

Hah. Disapointment is just one turn ahead, commander. Prepare for a little turbulence. This area we travel is uncertain and dangerous.

Hey JT, and anyone else who reads this comment, I’m definitely going to check out those comics, and I have one to throw back. It was written by a guy named Jay Naylor, and I found it a month or two ago. It’s long, and great, and all encompassing. Filled with just good humanity, and there’s a sequel that I believe is presently in progress. Enjoy: http://www.jaynaylor.com/betterdays/archives/chapter-1-honest-girls/
-emmett

@Emmett – I actually read part of that at some point in the past.

What is wrong with “The Fall of Little Red Riding Hood”, emmett?