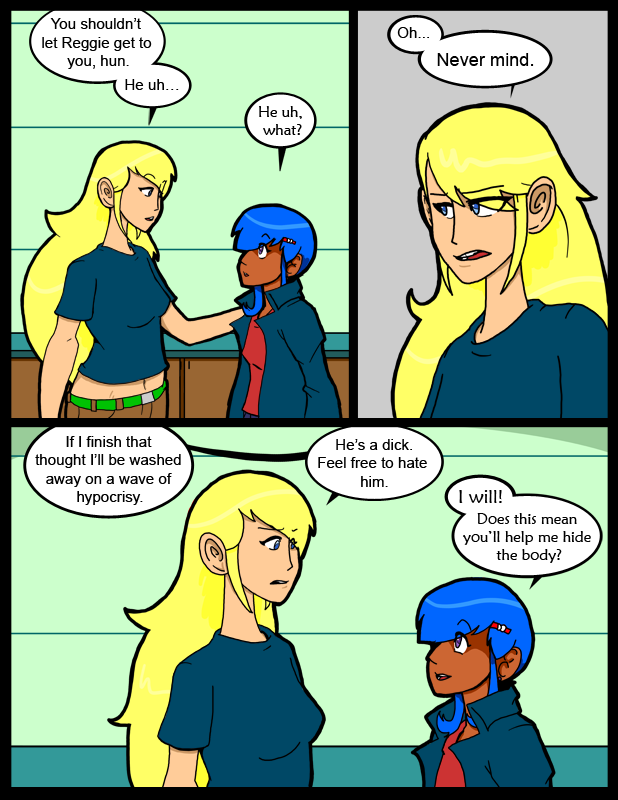 A friend pointed me at a video series called You Suck At Photoshop.  You can find it using something called a “web browser” and, if you haven’t seen it already, I suggest you do so.  It’s quite hilarious, but I also learned a lot of stuff.  Which is kind of sad, but at the same time I realize that I want all things to educate me in a humorous way from now on.

I assume Photoshop must have instructions in it someplace, but I don’t think I’ve ever looked at them.  All the versions of it I’ve had have instructions written as though by someone who has never actually seen the program, or really any kind of drawing tools.

The best instructions I’ve ever seen in software were in Manga Studio, and I still wish it and Photoshop would mate so I could have their superior baby to make the drawings with.  Of course it’s possible that Photoshop can do all the stuff Manga Studio can do already and I just can’t figure out their strange system of menus.  Or they’ve named things in ways that are counter intuitive to me.  In any case I wish I could pour them ina bucket and mix them.  Then pour them out as a disc?  I don’t know, the bucket metaphor might not have been the best…

I know some of you guys are artists, and I’ve always assumed you all just use Photoshop.  I wonder if that’s really the case.  Do you guys make due with something else?  I mean, I say Photoshop for the sake of brevity, but really I mean Photoshop Elements.  I think Mark Savary of Autumn Lake uses Elements 2, or something.  He said it at one point and I’ve forgotten…  Anyway, my point is that he does just fine with what he has.  What does everyone else make due with?

I use Photoshop, I prefer the older version of Corel draw, but right now it’s more expensive & the old version doesn’t work on my new iMac. The PS came bundled with my tablet.

I manage to get by with Inkscape and the GIMP. Before that I used Illustrator on rare occassions and did most of my work in Paint Shop Pro 7.

I make do with draw plus, pretty basic but gets the job done

Photoshop 7.0 is the win. stable and fast. I will use it until the day I DIE.

I like that you’re drawing the characters from a variety of angles now. Now we get to see Jolene and Nina everywhere! XD

I was using Photoshop 7, which was a hacked+cracked version, until I managed to get a nasty virus and totally killed myself. I use Photoshop CS3:Extended (also hacked and cracked) with no issues, except I cannot activate Adobe updater to update all the other (and more legal) Adobe things I use.

I’ve started experimenting with Paint Tool SAI and am, so far, enjoying the experience. I’m thinking about checking out Alchemy as well; never got into Corel or Painter, just didn’t stand out as well for me.

After a year,
I HATH FINALLY FOUND THIS DELIGHTFUL COMIC AGAIN.

I used to read it on smackjeeves…

Anyway, HECK YEAH.
Day has been made now that I’m all caught up.

I use Photoshop almost exclusively, and I’ve been using it since version 4. It’s Manga Studio that makes me want to bang my head on the keyboard. Maybe it’s because of my long-term relationship with PS, but I find it very easy to use in comparison. I’m using PS 7.0 on my laptop, and PS CS3 on the compy at work. If you need help, drop on by the Online Manga University sometime. We have a pile of folks who are super talented, and would be more than happy to help you with the subtle nuances of Photoshop. Tell ’em Prof Az sent ya. ;)

I use Adobe Fireworks (use to be Macromedia, but Adobe bought them) still have no idea how to use my copy of photoshop…

I use PaintShop Pro, and love it. Never switching, simply because I don’t have time to work the curve. Like others, I have multiple copies of Photoshop and Illustrator, but it’s far too complicated to begin d*king with.

I draw, ink and paint by hand usually. Sometimes if I’m lazy I’ll color on the computer because it’s a little faster but I like to watch tv when I color so I usually paint. :) I do use photoshop for stuff. I learned it off of “classroom in a book”. These are great! http://www.amazon.com/Adobe-Photoshop-CS-Classroom-Book/dp/032119375X I learned on PS5 or 6… something lower like that… maybe it was 7… but the basic skills are the same. And you’re right. Manga Studio was the bomb for including that gargantuan amount of instructions. Some people on the Smackjeeves forum were bashing it and I was like, “WHAT?!? It comes with more instructions than I’ve ever seen on a program!!!” and I told them where they were and they were like, “Oh, my God, thank you!”. Yeah. Cuz I’m awesome.
I will check out your link, though. My boyfriend is trying to learn some minor things in photoshop. It’s very difficult to teach people the simple things we take for granted.

I has Paint Shop Pro 9, but I really want Photoshop. I think I have Elements somewhere (it may have come on a disk w/ my tablet), but I felt extremely unsatisfied (dissatisfied?) while using it, so I stick to PS (which I’ve had longer than my tablet, anyway). The most frustrating thing about it to me is that it won’t take/make brushes over 500 pixels…which means it won’t take a lot of PS brushes. Also, I believe it has less features, but I don’t know all the details. Know how some people make those pretty watery scenes w/ PS (w/ the reflections and shinies)? Well, if PSP has that ability, I don’t know where it is. Still, it gets the job done, so I’m thankful. :)

Never done any artwork on the computer, so I have NO IDEA how to use Photoshop…
I just draw stuff with pencil on paper!

I use a mix of Paint.net and MS Paint, and anything else I can use. I have only ever used a trial version of Photoshop because I’m poor.

I’m told mypaint is popular on Linux. And it’s free. I don’t know how it compares with the proprietary stuff you guys are mentioning, but it should fit everyone’s budget.

I can’t draw freehand at all. I can do some basic design as long as I can construct the designs out of basic geometric figures and formulae. I use GIMP for bitmap work, which is basically limited to some image retouching. Mostly when I do something graphical I use Inkscape + Geany.
If you have never heard of Geany as a graphics editor before, you’re right. It is a text editor. Vector graphics such as SVG simply consist of a text document with instructions for the computer how to draw the picture. Sometimes when Inkscape doesn’t do what I want it to do, and I know what I want to tell the computer, I just open the file as text, write the instruction and reload it in Inkscape.