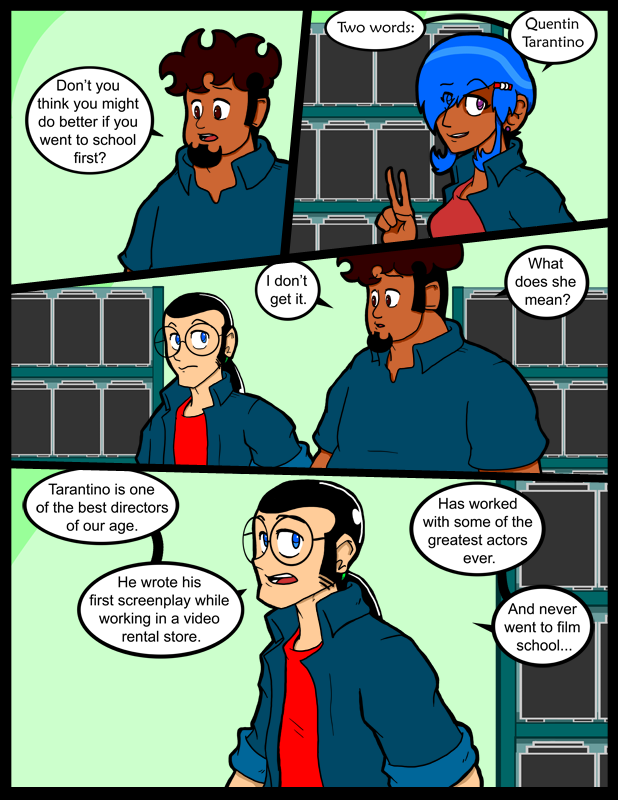 Usually I don’t bother to explain page titles, but on this one I’ll go ahead and talk about it.  Quentin Tarantino, when asked if he ever attended film school, reportedly replied “No, I went to films.”  I’m not really a big fan of his work, but that is a typically badass line for him.  It’s serendipitous that this page appears while Tarantino’s newest film, Inglorious Basterds, is hammering home some of the points raised.

(Before I get any notes from pedants, I realize that bastards is misspelled in the movie title.  Tarantino spelled it incorrectly, I assume, on purpose.)

I haven’t seen the new film.  I’ve heard good things from Cap’n Zac, who attended Chicago comic con, and returned with a prize for me:  A signed Shortpacked print.  He and I are both fans of Shortpacked, animated Batman, and the marriage of the two.

Brooksie can do any thing she puts her mind to! I would so buy her movies! Especially if they had Ed in them.

Awww! Itchy beat me to it! It’s actually “Inglourious Basterds”

Hey so I went offline for a little while but I’m back now and I got T-Shirts for everyone!
Just wanted to say the last seven or so strips are great and that I didn’t abandon you.

so you going to comic con next year :p

But, if you take the average of everyone with training, it’s going to be better than the average of anyone without. It’s never wise to assume your on the high end of the bell curve.