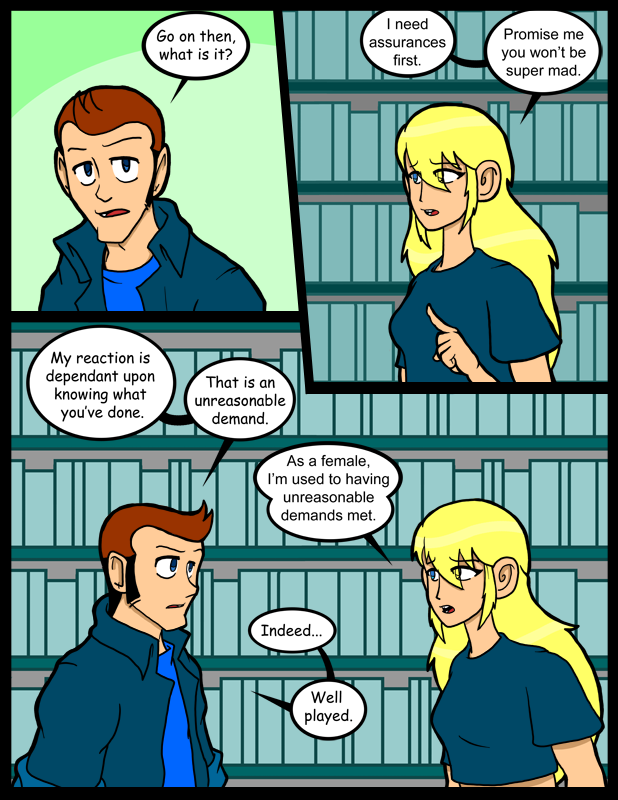 My trip to Garden was a good time, but we were running late from start to finish.  Left late after hearing about the passing of Dom DeLuise. (frowny face here.)  Stopped in town for lunch, unfortunately at lunchtime, which slowed us down.  Dropped of stuff at grandma’s.  Talked to Uncle John.  Got to Garden.  Hung out with Pete till Mom got the “meat situation” under “control”.  Had dinner with Pete, Mekalya, Keely, and Josephus.  Went to Staples, then Target.  Rescued mom from a pyramid scheme.  Watched some wedding video.  Went to Hastings.  Went to Wal-Mart to further contain the “meat situation”.  Drove home.  Ended Operation Enduring Meat.  Came to post about it in the comic blog.  Epic.

I didn’t think it was that big a deal if there was no post under the comic, but I have been advised that some people look forward to them too, so here you go.

Does anyone remember Bob Ross?  I watch a lot of his shows on PBS.  He’s been dead for many years now.  Since 1995, I think.  He’s still on tv, so people must know who he is, yet no one I talk to seems to remeber him.  People remember William Alexander from that Patton Oswalt (Oswald?) bit from his early days.  Anyway, all I’m trying to get at is that I like happy little trees.

ooh this is gonna be a big one…

Is hitting Reggie really enough to set Thomas off? I kinda doubt it. As annoying as he is, I’m sure Thomas wanted to clock him

She looks really sad but cute at the end

I’m still curious and you’ve drug it out. You are bad.

She delivered an Epic pimp hand of justice to the vile and wicked.

Saved Mom from a pyramid scheme?

GAH! I know, talented people are dropping like flies! We just lost Bea Arthur two weeks ago, and now Dom DeLuise is dead! why can’t Paris Hilton or the cast of the Hills die?

Well, he already knows Ed hit Reggie, via Ed telling him, I thought.

It must be something else…

I remember Bob Ross,
Beat the devil out of the brush.
It was a good show.