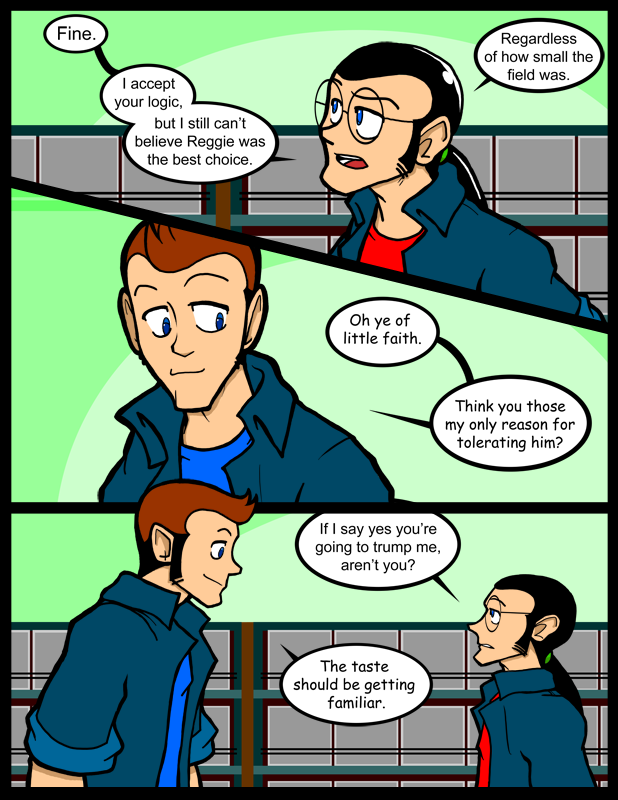 I had this dream where it was my first day of college.  I was, for whatever reason, Luke Skywalker.  The entire school was populated by characters from the films, including expanded universe, and various film makers.

My first class was Advanced Star Wars studies.  The instructor was not a character from the movies, or anyone from a film crew.  She was really gross, and annoying.  Plus, she kept calling on Govenor Tarkin to answer everything.  He was just as aggrivating as a Star Wars fan would expect.  He also looked like someone had edited him into every scene.  No matter what he was doing the lighting on his body didn’t match the rest of the room.  It looked like George Lucas had gone in and added him in after the fact.  Like this dream was the special edition version of my dream.  (Or like a fan made Youtube video.)

Anyway, the funniest part was when I finally had enough of Tarkin’s crap and pulled him aside.

“Listen,I’m Luke, fucking, Skywalker!”  I said.  “And I’m far tired of your bullshit.  If you don’t quit it I’m going to cut off your hand and pitch you down an unguarded air vent.  Then, after you die, I’ll still let you become one with the force, because I’m a Jedi and don’t hold grudges!”

I woke up right after that, and couldn’t stop laughing about what a strange line that was to deliver as Luke Skywalker.

Oooo the suspense is killing me,

I had a very strange dream about Between Failures a couple of nights ago. I managed to get to a piece of paper before I forgot it all :D

Its really hazy now but from my notes I remember it was about Carol going on some axecrazy rampage through the store. I think someone made her angry. Not too sure. Brooksie and Thomas were running around trying to stop her, and Brooksie tipped a bucket of orange paint into one of the aisles to slow her down, but it didn’t work and Thomas was annoyed. I think this was the stage where Brooksie also ended up on a pogo stick for some reason.

The dream then switched to me entering the store and talking to a woman who seemed to have no idea about what was going on behind her. She tried to sell me a batman game, except when I turned it on the startup scren had various pokemon sprites with Vegeta from DBZ as the trainer. The heading said Digimon, also.

After that it switched back to Carol, who was attacking another staff member. She was called Carrie or Cassie, or something similar. Brooksie was glad because she didn’t like the girl.

More happened but it had already faded into nothing by the time I wrote all of this down.

My subconcious frightens me. A lot.

i wish i could have logic just like thomas

Also, I can think of other reasons to keep Reggie around, and none of them are nice. Top on my list is to manipulate him. He’s a jerk to be sure, but he’s pretty predictable, too. In addition, he’d probably do ANYTHING for Nina, super-slap or no. So next time Thomas needs something…unsavory done, he could have Nina ask Reggie to do it, for example. Or Thomas could push just the right combination of Reggie’s buttons to get him to do just the right thing to further Thomas’ secret plans. So many possibilities, so little time and space in which to put them… ;)

Okay, I finally have a dream I can remember and share with the class.

I wanted to run away from home, for unknown reasons. I made my way through the lush hills of Oregon, when a trucker stopped me. I was looking to be about 16-18, and he asked if I wanted a ride. He was a slim tall white man, with golden brown hair, short and scruffy, with moustache. He seemed lanky, but strong, someone I could rely on, but someone I couldn’t always hold on to. It was raining, and kind of cold so I agreed to ride with him down to California. Our travels were quiet, I slept most of the way till we stopped in a town North of Las Vegas. In my dream Las Vegas was a few miles north of Los Angeles. I bought some groceries and made some money by “putting out”. Basically I turned a trick for a quick buck. As I left the grocer I got the feeling someone was watching me, ignored the feeling and got back in the truck. We stopped in Las Vegas a few hours later, right outside a small house. At first I didn’t recognize it then made my way inside the little house. My trucker friend was right with me telling me to be careful, telling me it wasn’t such a good idea, but he watched as I crept next to someone sleeping on the small brown bed right across from me.

Suddenly the man woke up and I began to run when he shouted my name. I turned around and it was my cousin, Joshua. Well it looked mostly like him. He had firey red hair, but cut very strangely. His hair was short, but but long enough to be put into some sort of mowhawk (much like Wakka’s hair in Final Fantasy 10), his longer hair was actually braided and curling from his forehead to behind his head. He told me that he was expecting me, and to stay if I thought it was okay. I agreed, and Joshua, his friend, his littler friend, and I played a strange version of Guitar Hero. We played on a small TV, old beyond it’s years, and the controller was a cell phone. The numbers 1-5 were colored green, red, yellow, blue and orange. The pound key was used as a Wah-Wah effect, and you could shake the cell phone to activate star power. My trucker friend, who has not shared his name with me, watched on as I played with them.

When we finished I helped put the TV away, and that’s when Joshua told me, over breakfast, that my mom was doing okay but it was her birthday this weekend. She’s sorry that I don’t want to stay with them but if I could come to her party in Seattle Washington, she won’t bother me again. I thought it was a little weird, and I thought it was a way for them to change my mind. I agreed nonetheless and asked my trucker friend if he wanted to join me. He told me he would only drive so far, then I was on my own.

He took me all the way up to Oregon when I stopped in town to buy something to eat. That’s when two people, a man and a woman, not cops, stopped me. They told me I was on a Wanted List, showed me a picture of me leaving that grocer a few weeks back and, told me to come with them. They wanted the reward. It was unclear who WANTED me, whether it was my parents or the police. Either way there was a fat reward on my little head (the reward poster said about 11,000$). I went with them for a short while then ran from them. There was a long chase, I made my way to the Oregon Coast, where water met forest, and climbed at odd angles to my freedom.

This is where it started to get a little weird. An animal spoke to me and told me that the surest way to get through this was to follow him across a large but very thin bridge. I stopped midway and he told me to hurry up and make a decision quickly. Either to wherever the reward money people took me, or to my family. I couldn’t do it. That’s when I saw a small Japanese touring vessel, steam powered nonetheless, pass beneath me. I jumped into the water after it passed and yelled “man overboard!” Instantly I was being dragged onboard, people were taking care of me, I shut my eyes…

J.T. – That was wild. I need someplace to keep comments like this together.

I envy your absurd yet highly amusing imagination :D

Ha!!! best dream to date! A little bit sad though.

I want to take advanced star wars. I would kick ass at that class.

*huff huff huff* Finally caught up… I’ve been reading the comic from the start for the last 3 days while I’m at work. (We’re permitted minor web surfing between clients)

I love the story. The artwork is superbly fitting. You have a profound understanding of the human soul. Both the male and female side. I used to work at a Futureshop. (Oddly enough I was just like Thomas, 26 and no direction) Makes me wish I had co-workers like this. I’d love me a Carol for my very own. I can’t deny this comic really speaks to me. Well done.

J.T. – Thanks for taking the time to check it out. I appreciate it, and am glad you liked it.

“Enough of your bullshit, Tarkin! Knock it off, or I’ll shove a proton torpedo into your exhaust port!”