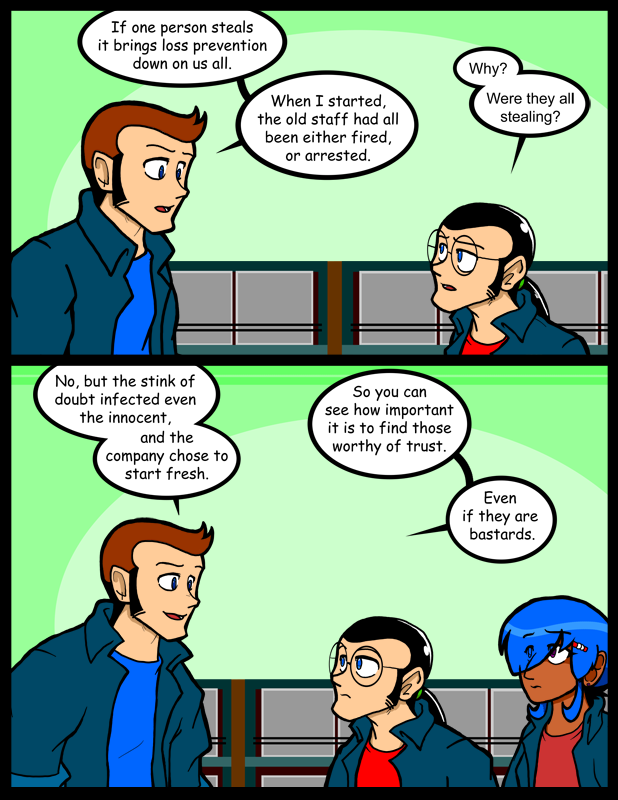 Did I tell you guys that I found the Matt TrakkerG.I. Joe toy?  He’s the leader from the old M.A.S.K. cartoon.  Kenner used to own that series, but Hasbro bought them at some point in the long long ago.  I had an assload of M.A.S.K. toys when I was little; even the good guy’s massive, transforming, convenient store; where they dished out questionable hot dogs, nachos, and JUSTICE!  Foolishly I sold them when we moved.

They were a good size for taking the little guys when you had to go someplace boring.  I lost the villain’s mask though, which for a kid like me, who was really obsessive even then, was truly maddening.  Without his mask he was just a fat guy with a rapist mustache.  Still a villain to be sure, but not as awe inspiring as a fat rapist who can shoot venom on you.

There’s something that bothers me about the name M.A.S.K.  It stands for Mobile Armored Strike Kommand.  Their foes are part of V.E.N.O.M. which stands for Vicious Evil Network Of Mayhem.  What kind of team can’t spell command?  The bad guys managed to use their spell check…  I mean, spelling isn’t a huge concern of mine, but still.  Of course I’ve tried to think of a suitable replacement for kommand, but can’t think of one.  Apparently the marketing team at Kenner couldn’t either.

Suddenly I don’t hate Reggie as much as I used to… MAKE ME HATE HIM AGAIN!!!

That makes sense. If you’re gonna keep a vindictive dick around, why not one you can trust?

I think everyone should remind Reggie of something: While they keep him around because he’s honest, if they ever find a nice guy who’s just as honest, Reggie will be out like last decade’s fashions.

A nice, honest guy like young Ed here, for instance.

Um, no. Tom indicated that he’s grooming Ed for a full time position. And it’s not in Ed’s best interest to be in Reggie’s sights any more than he is.

Although, it could help to admit to Reggie that he’d have a better chance of getting promoted to full time if he were easier to deal with.

So Reggie is a “necessary evil?” I can actually understand that. I was a department head once, and we had this one woman who was an arrogant twerp. But… her work was impeccable. Professionally she was great, but on a personal level, she was insufferable. SIGH.

I second FENN’s response. Although because he’s a vindictive trustworthy bastard, There might be some hidden use to that more than just a “human bookmark” or an “hours whore”. I mean, if you hire an Honest, nice guy, what would be the downside? Is Reggie really the lesser of two evils, even if the other “evil” might be a nice honest dude? Just a thought.

You know it just occurred to me that although this comic has been updating for…what? Two years? (Sorry JT, I can’t recollect how long this has been going on!) but this comic might be on 410, but it’s only Ed’s second day. Meaning in all the updates only a skim two days has passed. Makes me wonder….JT did you do the script for 24? LOL

J.T.- You’ve found me out. If you listen closely, you can hear the timer in the background as you read this.

Back in college I worked part time at a convenience store that was so desperate for people that would actually show up for work that they kept on employees they knew were stealing from them. They figured as long as these people were now and again stealing $10 or $20 (at most,) it was still preferable to having someone call out and being unable to staff the store and have to close up for half a day. Of course as soon as they got a new person who was reliable and trustworthy, they dropped the person they knew was skimming in a heartbeat.

J.T.- I think you’re confusing Reggie with Wes, who hasn’t been introduced yet.

All I have to say, its mobile armored strike Kiosk

The reason they went with Kommand was because if they went with Command, they’d have a word fragment for their abbreviation, Kiosk and all the other good K words didn’t fit, and if they kept the C and added more letters, it just turned gay, For example Mobile Armored Strike Command: Aerial Reconnaissance Association or Mobile Armored Strike Command: Ultimate Lasers Included, Nuke Everything. The phrase sounds cool, but the abbreviations just didn’t work.

I live in Edinburgh, Scotland and was unsure of ordering from over seas/online. It was the best thing I could have done! I recieved my dress about 11 days after ordering. I had some trouble with DHL – the delivering service used – but that isn’t Light In The Boxs fault. The dress was packaged very well and also turned inside out whih I thought was an excelent idea. Across the bust and over the shoulders and also the caped sleeves is padded so no need for a bra! The detail of the lace and pearls is amazing and looks just like the picture. The train is beautiful and the edging of it is enforced so it sits perfectly all the time. I am a size 12/10 in UK sizes so orderd the US size 8. It is a little tight across the back but I have 4 weeks before the big day so I will just watch what I eat and not over do it! It also came with extra beads and pearls in a little bag in case any fall off. I have noticed that a few have since fallen off, not a huge amount though, four or five beads. It came with a pink dress bag too which I am very greatful for. The white colour is lovely and I cannot wait to wear this dress for my big day. Thank you so much Dresses-sales.com, I am a bride-to-be-on-a-budget but I feel like a princess…http://www.dresses-sales.com