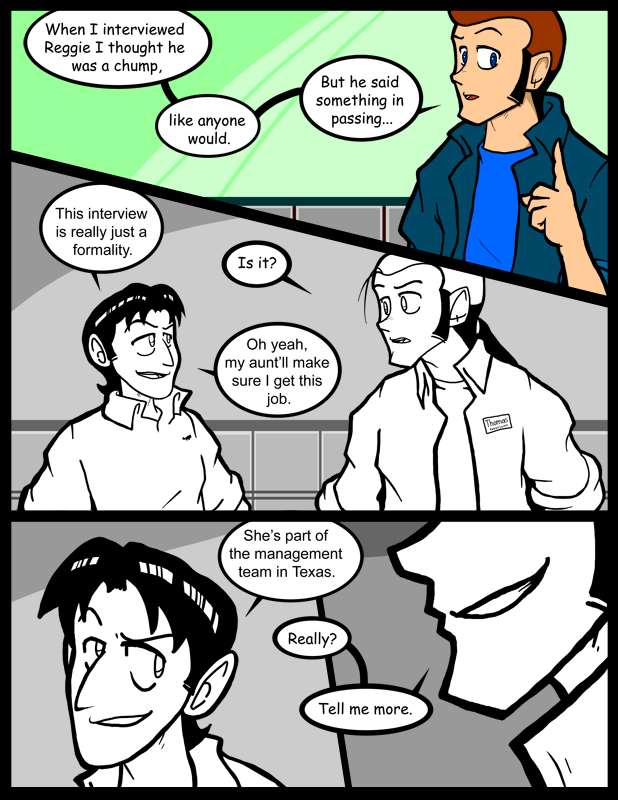 Don’t be shocked by the lack of color at the end of the page.  It’s a brief look back into Thomas’s memory.  I thought it would be neat to look inside his head again.

I had on Biography, which I normally won’t watch, in the background while I was doing something, and found out that Christian Bale was the main guy in Newsies.  Does anyone remember that shit?  It was him, and the Italian kid from Doogie Hauser, and the president from Independence Day, in a musical about the paperboy strike back in the olden times.  My sister loved that movie.  I must have heard those songs a million times.  I think I can even still sing parts of them.  Kind of like how I still know lyrics from New Kids On The Block from hearing the songs drifting through the house.

All this time I though Bale’s part in Newsies was played by that guy from Hey Dude.  They looked pretty similar.  At least to a guy who really didn’t give a crap about either of those actors at the time…  Or even now really.

Bale did that new Batman, but I still haven’t seen the second one.  The new Batman movies are fine, but they aren’t MY Batman.  My Batman is the one from the animated series.  (Or the Batman from The Long Halloween in the comics.)  Sometimes people say that Bale’s Batman is the one from the comics, but that’s bullshit.  It’s closer, but it’s still more like Tim Burton’s Batman.  Anyway, all I’m saying is that the animated Batman was the best take on him so far.

That new Batman The Brave & The Bold series is pretty good.  Surprisingly so actually.  It’s like a whole show dedicated to having third stringers look good by hanging out with Batman.

I always meant to check out that The Batman series, but just never got aroung to giving a crap.  a friend of mine was way into it for a long time.  He may just be really into anything to do with Batman, now that I think on it though…  I think I could buy the whole series on DVD for eight bucks…  I liked the character design for the most part though.

I have two Batmobile Hot Wheels cars on my desk.  The Burton one and the Adam West one.  I also have a sweet Batman action figure there too.  It’s the best one they’d made up till the time I quit paying attention.  I can’t find the exact toy in a picture, but it looks like Batman did right after the Gotham earthquake.

Ahahaha! Thomas really was telling the truth, no wonder Ed reminds him of when he was younger.

1. Thomas with the Ed ponytail is sweet
2. I think most of your readers are intelligent enough to recognize a flashback even though the only other one you have done was when Thomas and John went to the movies. (one of my favorite strips btw) Not saying that as a slight to you,it just seems like most of your readers are pretty quick.
3. Bale as batman is meh at best, but you really really should see the new one for how whats his dead plays the joker. It really is fantastic

J.T. –
1. I think there’s some debate about that, but it’s fun to mess with their hair in the past.
2. I just wanted to look out for the LCD.
3. I’m waiting for it on the movie channels. I’m sure it’s great, but just can’t bring myself to prioritize it.

breif? is it really spelled that way? :)

haha My god Crave, I love how you protray thomas as yourself :p what with the long hair and all HAHA

J.T. – I never looked that good with the long hair. Not even on my best day. Plus I certainly haven’t been that thin in my life.

Thomas used to have Ed hair!

I liked the original Batman cartoons (well, I don’t know if they’re THE “orignal,” but the ones that came out in the nineties or so), and then Batman Beyond. Crotchety old Bruce was so cute, lol. And I liked that Terry’s girlfriend’s name was Dana, just like Scully, too! I see my name so rarely in fictional works. :)

Oh, and “brief” is the correct spelling, bachterman.

J.T. – I didn’t use to like the Beyond outcome for Batman, but I’ve come to appreciate it. I even have all the DVD sets.

Why does Tom have Ed’s hair in the past?

I like his new hair better. Both of them.

J.T. – Yeah, they hadn’t grown into their propper styles yet.

J.T. – That’s going to be stuck in my head for days… You win this round sis.

so I’m guessing he used reggie’s employing as a way to gain the favor of the manager? something to that effect? he couldnt hve been intimadated right?

Ah, the good ol’ days of black and white.

I’m actually enjoying Batman: The Brave & The Bold more than I thought I would. I always thought the 90s WB version was as good as it could get, but the new one is a much more lighthearted take on the character without turning it into Adam West camp.

Aquaman, DC’s most useless hero, is hilarious. I’ve seen him in two episodes so far, and I can’t stop laughing at how he’s portrayed as a dim-witted lummox.

The B&W flashback is genius. Of course there’s no color, the strip wasn’t in color back then.

Please don’t tell me that Reggie is the only thing that keeping that store alive, it somehow worth dealing with his crap.

As Batman: Brave and bold, yeah it fun to watch I always flet the 90’s batman was keeping true in the comics while The Batman was ok, it like DC ultimate verison where supe up the villians and made batman gadget really cool.

I love that you put the flashback in black and white, since this was before the color came into his life. AWWWWW.

I was never more than lukewarm about the Nolan Batman films. BtAS remains my favorite take. I also liked Beyond. If nothing else, it was impressive how they took a terrible premise (I Was a Teenage Batman!) and turned it into an intelligent and entertaining show.