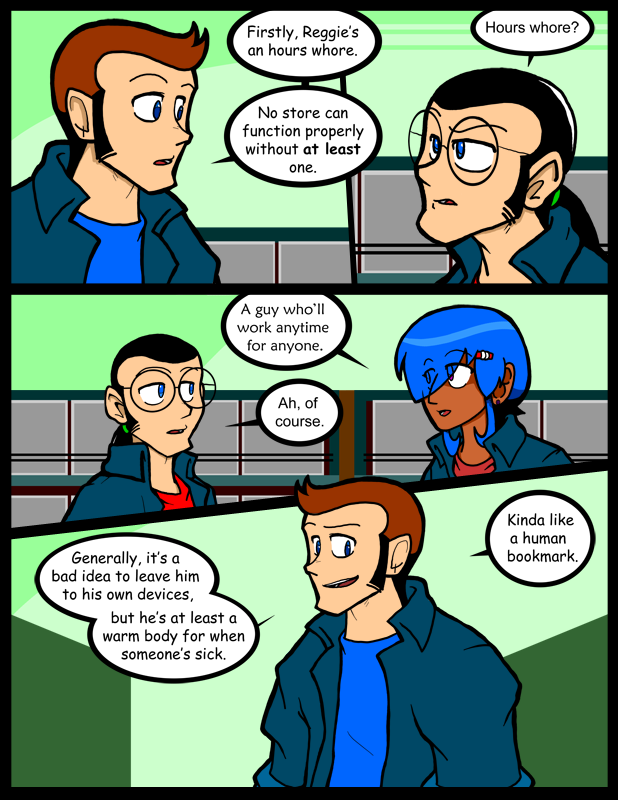 I always renew my little discount card at Gamestop when it runs out.  The one that gets you a discount on used games, and comes with the magazine.  It may have other powers.  I’ve been far from one for long enough that I don’t know anymore.  At any rate, I hardly ever buy used product.  I like the idea, but my personality prohibits most sales.  I am a collector.  I keep games forever.  To what end I know not.  It’s not like I go back and play them over and over, and I tend to buy the ports when they come out…  A lot of times once I finish a game I never want to play it ever again.  Even if I enjoyed the experience for the most part.  I’m the same way with books.  I never get rid of old books.  I keep them around, just in case I need them again.  Like if a merry band of nerds were to show up wanting to argue about who would win in a fight between Superman and Albus Dumbledore.  I’d have source material to back up my claims.  (Dumbledore, for the record.)

Ner.  The thing is that I only buy used stuff if it is in really good shape.  Like, has all its bits, and hasn’t been raped.  I make my guess at the condition of the item in question based on the condition of the case.  Which isn’t necessarily correct.  The kind of person likely to resell a game is probably the same kind unlikely to give a crap if the dog peed on the case, or their child rubbed chocolate inside.  (At least I like to hope it’s chocolate.)  If there’s no original case there’s pretty much no chance I’ll bite.  So it’s kind of a clash of personalities when I wander over to the used games.  I want a good deal as much as the next guy, but also want the guy that went before to care as much as I do.  I realize that this is, at best, a foolish desire.

The only reason I bring this up is because I actually found a copy of Jeanne D’arc for the PSP in nice shape.  Its used price happened to be the same as the new price.  (which is bullshit, but I know why that kind of thing happens so I let it go.)  However, with my little card I got, like, $3 off.  A pittance for some, but still a bargain.  Plus it gave me something to think about, and in turn write about here.

I don’t intend to play Jeanne D’arc right away.  I’m still playing Disgaea DS, but once that game is done I’ll need Jeanne to fill the void in my empty, empty, soul.  Fill it with swords, cute anime skeletons, and voice actors speaking with french accents.

i’ve never heard it that way before

I just wanted to say this as it was as good a place as any. Really like the comic, interesting blah, blah you know the score etc. XD

Just wanted to say that one thing I like in particular is the fact that the characters dialogue doesn’t overtake the pages. Found that in many webcomics, theres almost a dialogue flu going around when theres more words than artwork.

Keep up the good work.

Sometimes I sell my old games there, but I’ve always been rather meticulous about keeping them in good shape. I leave the booklets inside, put the disk in so it’s straight and everything, and don’t let my daughter chew on them (if I can help it). I also buy the used games and hope desperately that no one let their dog rub its butt on it.

And speaking of old games, I want to get the Jak & Daxter series. I borrowed my aunt’s copies (yes, my AUNT), but she asked for them back, and I like to have my own. Sometimes it’s nice to go back and play your old games…if you don’t mind digging out the antiquated systems and hoping you can still connect it to your shiny new TV. ;)

I think I’m an hours whore… but I’m nice and a student right? right??!!
And I agree with you as far as used games are concerned, last one i rented was so full of that strange chocolate like substance (it tastes belgian) so I took it back and the guy agreed it was shit and gave it to me for keeps. Happy days!

Poor Reggie doesn’t know that his own hour whoring may be keeping him from ever getting full time. Cuz then Thomas, John, etc… wouldn’t have someone to pick up their shift when they just don’t feel like working.

I’m a book/game collector too. I can’t give them up. Yet if someone borrows them and doesn’t return them, I don’t care. I just can’t quit on my own.

I agree with you on the collector mentality, as you well know, JT. But I disagree about Superman vs. Dumbledore. If he went at it correctly, Kal would use his super-speed to do whatever he wanted to do and Dumbledore (having mundane human reaction time) wouldn’t have a chance.

Writers don’t make much use of Superman’s super-speed very much because it’s a plot-killer. But in real life (?!?!?) Kal would use it all the time . . .

I too am an hours whore, Only I was one of the good ones they wanted to keep using. Also I try not to hoard, I donate alot of my stuff but yeah I do have a huge hoarding tendency, like someone may someday need string!, so I must save this string!.

I too am an Hours Whore. I will take hours anytime, regardless of how it inconveniences me. *curses stupid highschool kids for making me give up my only day off in a 9 day stretch because they were too hung over to bother showing up*.

I do not mind it so much, actually. More hours means more pay, I like my job, I’m in good with my boss, so if I ever need time off, I pretty much guarateed to get it, and if he can ever convince the store owner to give him another full time slot, the position is mine. So overall, not too bad.

I used to be an ‘Hours Whore’ before I went back to college to get training for a better job, oddly enough I work at one of the last EB Games stores in my province, as EB was bought out by Gamestop and we’re one of the last stores to switch all our signage over.
That being said I know the horrors of the used games market, and thankfully everyone at my store is admant on one thing when it comes to used games, if we wouldn’t buy it, we don’t sell it.
Thus the horrendous hordes of scratched and battered games we get in at our store (9/10 of them are 360 titles) usually get put in a box and sent away to be fixed, and we rarely see them again.
As to why most of the scratched games are 360, my town’s a Mill town with 3 major pulpmills and a dozen or so sawmills within a few hours drive, thus we’ve got part of our customer base being of the “I have money, and I don’t give a shit how I treat my stuff, because it’s my stuff” persuation. Honestly, Fratboys take better care of thier stuff than the average millworker, or thier kids.

It’s 1:09 right now as I’m writing this, soooo I’m to tired to enter the conversation.

Not me I get rid of everything as soon as I’m done with it. There are only a handful of games that I have held on to. I live like a monk.

Hey bud, i just stumbled onto this comic and i have to say…i absolutely love it :D. great job to you, and a new bookmark for me!!

Good game, gets broken once you find out about the aoe hits, but an interesting take on a legend

New reader, and currently going on an archive binge. I just chose this page to reply to first…

You’re pretty much the same as me. I have games in my collection that I have not played in 5 years or so. Why? Because they were worth enough to me to complete the game, and I enjoyed their storylines. The only time I would sell off a game is if I didn’t actually like it.

On pre-owned games: Yeah. Like you, I like to have the original case, manual and disc in good condition. If something can be passed on to somebody else, then it is just nice to pass it on in good nick.

What a mouthy bookmark