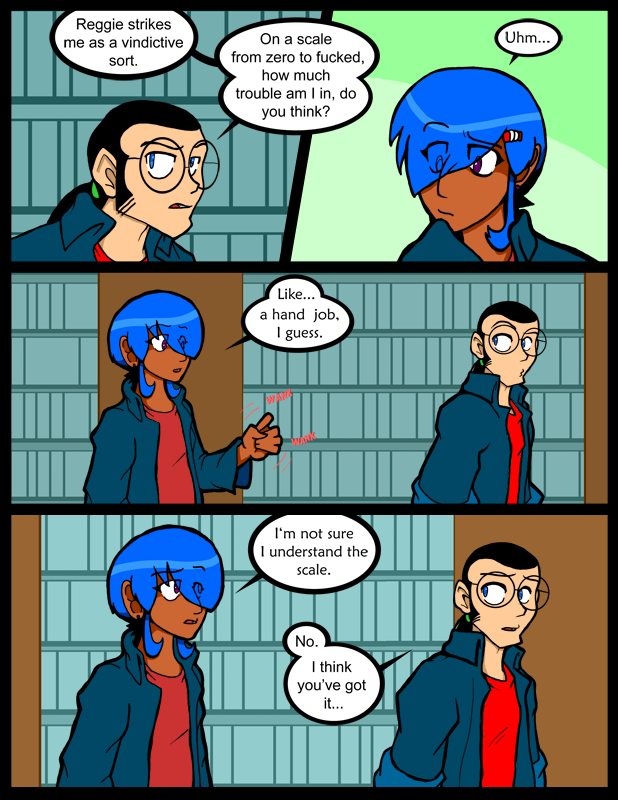 This is one of those pages where I wonder, at various points during construction, if anyone else will “get it”.  Time has proven to me that I cannot judge what people will, or won’t, enjoy or understand.  So now I tend to just wing out whatever spills onto the Wacom.  Anyway, the Zero to Fucked scale hasn’t been set in stone, and honestly doesn’t make sense.  Still, it’s my favorite method of deciding how much trouble I’m in at any given time.

So I downloaded all that stuff on my Wii, right?  Well there’s not a lot of space inside a Wii, so I was worried that I might need to free some with an SD card.  They had some cheap ones at one Wal-Mart I went to, but my Mom told me that they were clearanced at a different store, so I didn’t get one.  Of course when Mom checked the other place they didn’t have any at all.  Which sucked, but the memory card isn’t a priority at this point.  Anyway, while she was looking for the memory card Mom found out that one of the guys who work in electronics died in a car accident.  Now, it’s not like I knew the guy, but it was weird to find out.  He was one of the background characters in my life.  If he was just gone one day I would have assumed that he moved on with his life, and never think about him again, but since I know he died it suddenly made him real.  Does that make sense to anyone?

Lol. Zero to Fucked.. Pretty clever. Perhaps something like this?

last two should be the other way around…

Also, replace zero with virgin clean. Then do celibate immediately after

It took me three readings to get it, but I did. Now that I do, I find it hilarious!

I totally get what you’re saying. there was a kid at my school that went out hunting last year, and accidentally shot himself. not an extremely popular guy, but everyone in the school felt bad. a background figure, but still a part of the big picture. I sympathize.

And the other, personal stuff up there makes sense. I think it mostly makes us think about our own mortality and how everything can go all pear-shaped at any moment. It’s probably not in the forefront of your mind, but it’s there. His death becomes more real because you associate it with your own. I think.

Took me two times through, but I got it and I thought it was hilarious

rofl that was funny…..im gonna laugh about that all day.

That made my day. I fear my job loss no more. DAMN YOU CIRCUIT CITY!

I haven’t left a comment in a long while but I’ve been enjoying your comic all the same. This strip made me laugh more than usual, and had the added bonus of being read by me in a public place (*university library) So… yay!

Re: Death being “real”

I knew five people who were in the Twin Towers; three from my undergraduate school, and two from my graduate school. I didn’t know them well, because they had different majors and hung out with different people. I just periodically saw them in the halls. But when the alumni newsletters cam out the following November, their pictures were featured in memorial articles. Nine-Eleven was a terrible moment in history; no one will deny that, and I was as shocked as anyone. But when I saw those articles, with those faces I remember from the university halls, it sent chills up and down my spine. I may not have known these people well, but I knew that they each had lives as complex and intricate as mine or anyone else’s. Those lives were snuffed under tons of falling concrete. One level of separation had been removed. The horror of that day became just a little clearer, and death became a little more real.

It makes sense that it affects you, even if you didnt know him personally. I was at walmart once and a complete stranger fainted… me and my mom helped her, and waited with her while her grandson came to get her. Nothing as dramatic as a death, but still something thats affecting… i wonder if she’s okay sometimes.

This is the winner for best strip of the day.

I thought I left a comment here already… huh. I see what you mean about the person who died. It’s like other people just seem like extras in our life movies until something happens to make them real to us. It makes you realize the world doesn’t revolve around you for a minute.

I think JackLol made the best representation of what the 0 to FUCKED scale would be. So I guess Ed isn’t in that much trouble unless Nina believes in following the rules, which I doubt that she does.

This page is now my desktop background. :D

Shit that sucks for Mr. Electronics. Someone told me that one of our door greeters died like… a day after he had been at work. It’s weird how quick death is. Dude don’t fuck around.

WOW! I was gone just long enough to collect a great bunch of pages! My comuter caught a virus, so I was out of comission for a while, but now I’m back with a lap top. So, yeah! keep up the stellar work JT!

Yeah, it makes sense (about the dead guy now suddenly being “real”). We’re all only a heartbeat away.

On a lighter note, I liked Ed’s ponytail action on the last page. :)

I got it first shot.

Does that make me a freak?
Or is the fact that I’ve used similar references myself?

Oh i got it lol,All i can say is hilarious.Thank you so much *bows once more in admiration* I havent laughed that hard in a while.Honestly,at this point im going to say thank you for brightening my day too.Wonder whether you`ll notice my comment,but thank you anyway.

its ok SotiCoto i got it too first shot

I love you, Brooksie.

One could say she has a.. firm… grasp? XP

This is my favorite individual strip of any comic, web or otherwise, ever. Kudos sir.

I Scrolled down, then up, and repeated a few times. And with each Scroll i Laughed harder and harder. That joke wouldn’t have been as funny if Brooksie wasn’t the one to answer. Ultimately and Instantly Classic.

Kiss on the cheek

Kiss on the lips

Probably more but my hour is usually up by then.

I could not stop laughing for 5 minutes. This comic is the greatest. I’m going to have to read this all the way through today now.

“I don’t understand the scale.”
WELL I DO

is that the first time i see her hand?… and doing that? wow.
noice