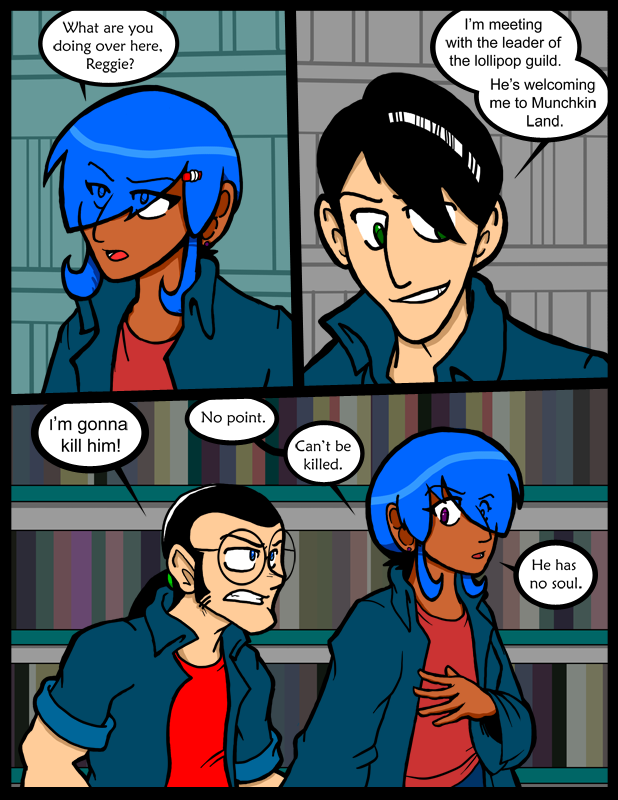 I had a really strange dream.  Well, compared to the stuff I normally dream about anyway.  I rarely dream about reality.  It’s usually crazy past times, or future times, or random insane fantasies, but the other night I dreamt about something that was really realistic in some ways.

I found a book lying in my room that I didn’t recognize.  I picked it up and realized that it was a graphic novel I had drawn and written, except it was really good.  I hadn’t drawn or written any of the stuff in it though.  So I looked at the publishing information and it has been printed IN THE FUTURE!  (OOOOOOWEEEEEEEOOOOOOOO!  MINDTAKING!)  So I ended up taking it to show my Mom.

She was all “When did you have time to do this?”

And I was like “I didn’t.  It’s a temporal anomaly!  It was printed in the future.”

Then she said “Well, you should try to memorize what’s in it so that when you actually do make it you’ll already know what you were going to write.”

So I was like “That’s a really good idea…  But doesn’t that create a paradox?”

And she replied “I don’t know.  I don’t care for science fiction.”

Maybe it’s a premonition crave. I mean, you already rock with Between Failures.

so i just spent the better part of an hour and a half becoming addicted to your comic.
loves brooksie!

A temporal anomoly wouldn’t create a paradox. Just look at star trek 4, when they give that guy the formula to make plexy glass or something like that. Taking info from yourself only promotes the fact that later on you have to make sure that you have to give yourself the info. You read the book before you spoke to your mom. Your subcon will remember every detail even if you don’t. Good luck with your future dreams.

Reggie just needs a handlebar mustache and a top hat and he’d be a perfect screen villain.

… Wow, that’s better than my dreams about my co-workers being naked any day. Why oh why do you torment me so my subconscious? Also, I would like to see the handle bar mustache Reggie suggested previously, possibly with a cane as well as a top hat.

I just read through the whole comic in one sitting. This stuff is totally awesome. Made me really feel like making some fanart stuff ;)

That’s what you get for question THE TIME PARADOX!

And that’s not true. You can kill things without souls, it just… y’know not as fun.

That’s a pretty awesome dream. Maybe it’s a premonition? or maybe it’s your brain telling you that you have the chops to actually do it? *nudge nudge*

I have to say again. I. LOVE. BROOKSIE.
Must do some Brooksie fanarts

Oh my so so very hot!

i do think she is right about Reggie!

it’s a sign that you know full well you have the potential to do something you love, you jsut have to convince yourself of it first.

Those people rule, that must make you feel all warm and fuzzy inside.

Crave: They do rule, and it certainly makes me feel better than when people don’t like the comic.

Ed looks hilarious(read constipated) when he is pissed

Took me a couple of hours, but I’m done. Now you need to release some new content! q;o)

how do you kill that which has no soul?

Well, random name, first of all, there really is no way to kill the soulless. Sure, you can banish him to the nether-realms with his most feared object (aka: the bible, a copy of Bill and Ted, firing him, etc.), but he will always come back more powerful than before at some point. Also, as “The Wizard That Did It”, I could permanently banish him, but I’m an ass so good luck getting rid of him without me bringing him back to be cruel.
Actually, you can kill him, but the soul must be reunited with the body first, and I fed his soul to my pet, Cthulhu.

Actually, Reggie is big time lose.
Ragging on someone’s height is serious lame, and definite loss of style points. Seriously, who even does that anymore? They stopped doing that back in 70s Archie Comics titles. If you’re gonna play the dozens, come up with some creative crap… elevation-based humour is for kindergarteners and advertising executives.

Actually, this ain’t a popularity contest. Reggie doesn’t auto-lose on account of going against the crowd favourite. This ain’t kayfabe. The troll that provokes the reaction wins the game.
As the height thing goes, the topic is weak… granted… but his execution thus far has been of fairly high quality.

O’course I know how it goes since this isn’t my first (nor second) time through the archives… and Reggie ruins his chances by whining like a bitch at the end…. but if he hadn’t done that, it would have been a clear victory to him.
Ed’s only point in all of this was his sterling opening salvo.

Facts as be… most people round here can’t judge a competition of personalities for squat.

There’s really no knowing if the book was good or not. I, at least, tend to have very intense feelings in dreams, that sometimes seem to get “plastered on” for no real reason at all. The goodness of the book could just have been a property of the dream, and not of the book.

anybody else notice how brooksie teleported from behind reggie to between the two of them now thats NINJA!
also i now have every comment in the recwnt comics ftw

1. To kill tha which has no soul, give it a decrepit one and make it beg for death
2. Time paradoxes first need to be ackonwledged to occur, plowing through then looking back on the scenario afterwards nulls them

Not a paradox; a stable time-loop. It causes itself, rather than preventing itself!

Brooksie has a point and I agree with Ed.