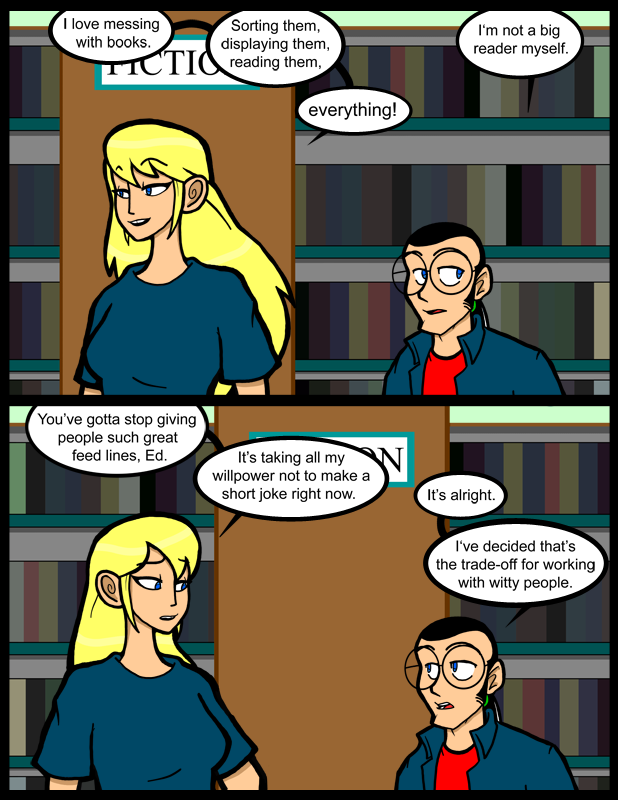 Are all Canadians awesome?  Is Canada some kind of magical land where everyone is cool to everyone else?  Is it really America with less suck?  I know it can’t be so, but I’ve never met a Canadian that wasn’t nice to me.   I need some worldly person to set me straight.

Canadians can be very rude, but only to other Canadians from another province.

My stepdad is Canadian and he is a total douche. What brought that up anyway.

On another note I bet Nina is from the same Island as Wonder Woman.

The island is called Themyscira. I don’t know much about Canada but, I hear good things. And I just realized, Ed is breast level with Nina.

I happen to be Canadian, and from the American’s I’ve talked to, there really isn’t a whole lot of difference that I’ve seen. Though I’m horrible at judging such things, to be honest. ^.^;;

canadians are half-french. and you know how the frenchies are…

It is slightly less sucky, yes.

not too many Canadian’s in Florida, so I can’t really answer that for you. :-D

I’ve met a few Canadians I haven’t liked, but on the whole you have a bunch of people who are holed up in little houses for a large part of the year. The nice ones survive, the rude ones … don’t.

I used to live in Alaska, It was much the same there. (Just don’t get me started on Palin.)

I’ve never seen a Canadian that knew how to tip.

Canadians are no better and no worse than anyone else, we just believe in being polite to you while being a jackass thats all.

We’re very polite but what we’re thinking often doesn’t match up with how nice we’re being. I love it here, but I have to admit we’re very hypocritical. At least our beer is good, lol.

LOL @ Theron. Yes at least the beer is good.

Seriously, there are some pretty rude Canadians out there. I’ve met quite a few of them. Maybe we’re just not as openly rude in general?

The Canadians I’ve met are usually on vacation (snowbirds in San Diego), so they’re almost always very nice and quite happy… go figure, they’re having a good time in great weather on vacation!

Since your need is so great I’ll write an insult about American beer to prove we can be jerks:
“Damn, I’ve drunk better tasting and more alcoholic tap water than this Coors stuff.”

Seriously though, we really are primarily separated from Americans by a greater intolerance for rightwing extremism (including such things as having your HMO system instead of a real healthcare system) and a greater devotion to making sure we’re polite–especially to people we don’t like or expect to meet ever again.

I’m afraid if I worked with half as many people who were that witty, my brain would implode. Canadians. To me, they’re black and white people, some of them are the greatest ever to live, while others are complete scum. Damn you canadians, damn Celine Deon, damn you avril….

I’m Canadian… and everyone I ran into when I worked in a souvenir shop was told “So, I take it you haven’t been to one of our hockey games yet?”

We tend to give what we get… and usually people are nice to us. Which is good… there are more hockey sticks in this country than there are people to wield them. XD

I think Nina and I must be distant relatives or something, like, mental relatives. I LOVE sorting books, too, and I’m tall, too…but I’m not blonde (anymore). And it’s pretty hard to resist when someone sets themselves up for a good joke…

The only ones I’ve meet or know of are nice and/or talented but they seem to hate canada as much as americans hate america. The grass is always greener.

My ex-wife is canadian.

I’m Canadian, and I can say without a doubt that Canadians can be just as bad as Americans. It all depends who the person is. Oh, and we all hate Quebec. Even people from Quebec hate Quebec.

I second Egads irrational hatred of Quebec and raise him a nickel.

It’s pretty much a national past time; my family hates Quebec almost as much as politicians. (my step-grandfather IS French and He hates Quebec.) I might have voted for Harper but that was much like voting for the slightly less poisonous species of snake. It would be much safer and easier if we simply let them all fang them selves to death. My father was practically foaming at the mouth when the ndp-liberal-block quebec majority vote thing was posted in the papers. Admittedly this was partially a result of the possibly unholy combination of liberal and block all in one place.

Oh and as for rudeness? Can I say it the other way around? My dad used to run a hunting and guiding business before 9/11 screwed up plane travel. (you can’t bring guns, you can’t bring deer/goose/elk/m.goat or anything similar back anymore.) He now works rat-patrol :)

I’ve never met a rude American. I even went down to Montana for a summer holiday once. Of course most of the American’s I’ve met have been; Lawyers, Bankers, Doctors, and other similarly well off individuals who can afford to skip country once a year to go hunting. Oh and the occasional gamer in arcades when I was down south.

(notably I’m enough of a nerd that I spent more time in Arcades then exploring the wonders of Haven the underground city and similar historic treasures. Oh and pondering the mysteries of Catsup… The mind boggles.) (1)

Human beings (2) are similar everywhere you go; most people are pretty nice. However it only takes one retard to paint the world black. Canada has a few major advantage’s over America and most of the rest of the world for that matter. Except Australia. We don’t have a high population density; this reduces stress, living expenses, noise pollution, ect. We also are mostly muts within a generation or two; racial flare ups are incidental. My blood comes from three different countries that are far enough apart to have barely anything in relation to each other. Ireland, Germany, oh and I’m half Norweigan-Sweed apparently…

I’m rambling, back to the point.

A mob is only as smart as it’s stupidest member. There are less of us so it takes a generation or two to stumble across a jackass savant that can alter an entire nations image simply by being born and being put on camera. The rest of the world simply chooses to ignore these occasional and incidental genetic misprints.

Also America doesn’t have chicken nuggets. Thus they lost the fight before it ever began; just as we burned their (now) whitehouse before our nation was born.

(1) For those uninformed and confused as I was; let me enlighten you. American’s call Ketchup…. Catsup. It’s even on the labels and everything. It wasn’t until I noticed this factor in Wendy’s that it hit me… I really Was in a foreign country.

(2) For reference to what I consider your average human being; please listen to Van Halen – Humans Being. It’s an excellent track; you may have heard it playing in the background while watching ‘Twister’ The guitar riffs are down right inspirational. If Mozart had an electrified, amplified, and rocking guitar to play with I think similar licks would have existed in his work. The lyrics aren’t really all that important; it’s the melody.

For my part I find that when discussing the differences between America and Canada Canadians tend to be irritatingly passive-aggressive. I remember an American who was living in Canada describing how Canadians would talk about the US/Canada border as sort of a two-way mirror where America would look at it and only see its own reflection while Canada would gaze at America through this ‘mirror’ like a wistful schoolgirl. Pure BS.

One time when I was in Canada visiting my cousins, and we all went out for a walk at night, I think there was some neighborhood event going on or something. Now, my family is Nigerian, so we are all pretty black. So, this drunk guy riding on a bicycle, swerving all over the fucking place, rides right beside us and yells “FUCKIN’ SMILE!!!” That is my one encounter witha mean canadian. Now, Canadian Arabs are a different story. Those kids can be fucking assholes.

im canadian and yes we are all awesome that is all.

The true thing about canadiens is that,

Jk, but seriously, from a canadiens view, we’re total ass-hats.
We make nice so you don’t wage war with our shitty army of one soldier and a car with a gun straped to it.

Well, depends where in Canada.

Toronto’s similar to a city in America in terms of attitude, whereas smaller towns, such as North Bay (and even some larger cities, like Calgary) are full of rediculously nice people who fulfill all your stereotypes about us. Literally: buses swirve around puddles when people are walking past, amiable conversations with strangers are relatively common, and the surrounding landscape is what everyone seems to think of all Canada looks like. ..

For an explanation on the reason for canadian good manners, look here:
http://questionablecontent.net/view.php?comic=643
specifically the last panel =)

its part of the requirement for a passport you have too take an ettiquite and manners course.

its part of the requirement for a passport you have too take an ettiquite and manners course. in canada