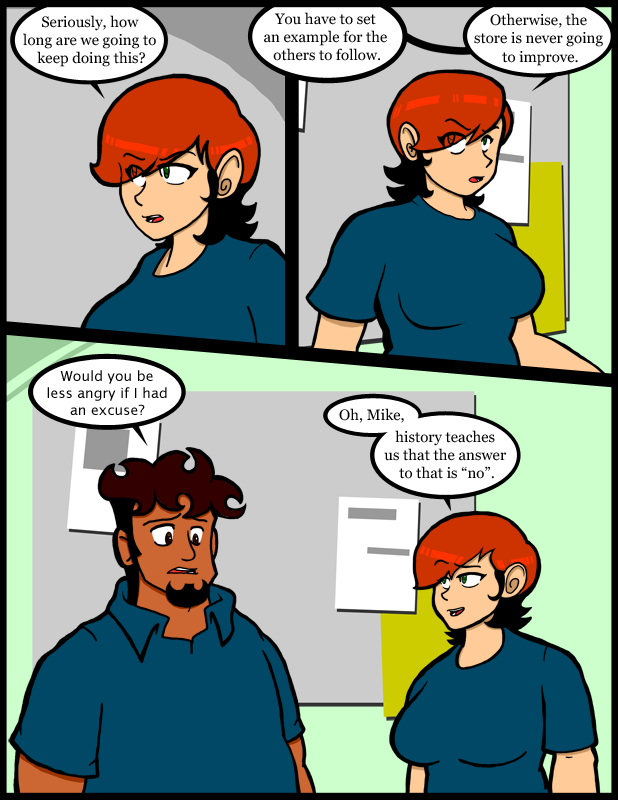 Even though Mike is an unpopular character I still like him.  I worked with several useless managers over the years, and even though they did annoying things I still liked them as people.  To be fair, I’m not a real treat to work with from a manager’s standpoint.  I argue, ask questions, and dislike the “all for the company” mindset many green managers start off with.

I’ve begun the quest for a forum, for those of you interested.  It’s a whole new deal for me, but really pretty much everything to do with this website is, and has been.  I spent time looking up how internet forums work, how you build one, and so on.  At this point if someone were to ask me “How does a net forum work?”  my reply would be “Equal parts internet chicanery and dance magic.”  I would then act out one of David Bowie’s dance routines from Labrynth…  Minus his deeply disturbing codpiece.

You know what?  I’m sorry for mentioning Labrynth era David Bowie.  Let’s scrub our collective minds by thinking of his co-star Jennifer Connelly as she appeared in Career Oppertunities.

yay, first post. first for me!!!
ok seriously though, thats the story of my life.

I’m partial to PHPBB myself. I use it on all my websites. Its good stuff.

I prefer to use internet chicanery and a large portion of equal parts old-school alchemy and mad science.

I love how she’s basically saying “Damn your excuses!” while being nice and smiling at the same time.

Wow the Rocketeer, I haven’t even thought about that movie in years.

Forums aren’t too difficult to make. Check out invisionfree and find a guide on it.

“I am 100 percent AMerican, and I don’t work for no too bid stinkin Nazi!” heh. I think a forum would be a wise idea. MMMMMM Connely :D

The Rocketeer is an underrated movie. And not just because Jennifer Connelly was astonishingly beautiful in it, either.

I think “Oh, Mike” is Carolese for “You dumbass.”

I would suggest doing what I did & getting together with some other web comics which you feel are similar enough in tone or temperament with your own & getting space on their forum(s). This way the readers of one comic can also discover those which you like & vice verse. It’s also cheaper & there’s usually someone who already has the job of managing those nagging little details (like prolific spammers & troublesome trolls) which you don’t want to take the time to deal with.

& I disagree with Mathias, I think that what’s under Carol’s shirt should be left to everybody’s imagination.

Hahaha, I would consider my prior post an inside joke b/w myself and the author of this entertainment medium.

Dance magic alone is not enough. We must use jump magic as well. :9 So sayeth the Danial.

I like David Bowie, he was the goblin king

While I love the Labrynth and David Bowie within, his codpieces and crazy costumes were VERY disturbing and LOLworthy X3. Poor Mike, you can tell he wants to be one of the guys, but it’s so hard to be one when you’re “The Man”.

Also, yours would be one of the few forums I would actually make sure to be an active member. MAKE A FORUM :3

Career Opportunities is an awesome movie, thank you for reminding me of it.

Crave…. more….. MUST…. HAVE….. MORE. Seriously, I LOVE this comic. i can’t wait to see more. I have had my neighbours banging on the walls to shut the hell up because I’ve laughed so hard. Such an awesoem comic. Full of win of such magnitude it’s amazing.

The Rocketeer was the movie that impressed upon me my still present desire to own a jet pack.
Recent advances suggest that this life goal may soon be within reach!
Nazi’s of the world, may you know fear before you die.

Tangentially, my favorite character from Labyrinth was the chinese (korean?) juggler who played the Goblin King’s arm. Women must surely swoon at such skill. Men must quake in fear.

P.S. A forum would be most welcome.

C-Ham, that was an intentional misspelling for humorous effect.

Poor Mike. if he doesn’t learn from his history, he’s doomed to fail in his future. lol.

Mathias, had you not commented again and proved your sanity and that you have a brain (I admit you do! No offense =P I just abhor “1337” speak) I would have hated you my entire life.

I dig Mike. The guy’s in a rough position, but I think the earlier bit with the signing, where he basically cared enough about his store to actively try and make it more successful instead of just riding the retail fail-o-coaster made me dig him. In a, y’know, doomed sort of way.

I suppose I should be appreciative, “Jallice.” :)

I like the *insert-word-I-forgot-here* board and the different angles on it, too. ^_^ Yay for backgrounds!

I dunno…I kinda like Mike. He reminds me of all those managers who have just gotten a seminar for training, and then gotten dumped on their own to try and learn what they can. Doesn’t really know what he’s doing, in way over his head, but…he’s learning, and he’s got a great team to learn from. If he can get his act together, he might even last out the month. Who knows, maybe one day he’ll even be competant enough for T to be able to go on vacation once in a while (chain stores, like most large organizations, tend to develop a hierarchy that in no way matches the org charts at corporate HQ).

Connelly is awesome!…and super hot. I’m glad I’m not the only one who found the gray pants-codpiece combo disturbing!
Also, for some reason I just imagined Mike to have Seth Rogan’s voice here. Seth’s simple character voice from Knocked Up. It just seemed to fit.
I never saw Knocked Up, it just didn’t look good to me. Not my kind of movie/humor. But just Seth saying “With a baby?” I could see Mike with that voice. maybe I’m just crazy

I watched Labyrinth when I was a child, and thought it was awesome. Having such good memories of it, I decided to purchase it again 20 years later, and decided to watch it with a whole bunch of friends.

I think Labyrinth is cool in its way, but super creepy sometimes too. As suggested by my post…

It’s that mixture of cool and creepy that makes it great.

So, I’m rereading the comic again. My first time reading improved something. Something I’ve kept quiet about. Something I’ve noticed In in other properties occasionally. Carol, in a short amount of time, has changed weight, and possibly brest size. I do not understand why it’s a trend to make main character females fatter and give them bigger boobs, well I understand the boobs actually. It wouldn’t bother me if there were a story reason, and a reasonable of time. Nor do characters bug me when they start that way. It just bugs me when any character design changes for no in continuity reason. And this happens to be a common one. Just something I had to finally note out.

The reason is I couldn’t draw for shit on my terrible computer, so I did the best I could. Also, I hadn’t really had any experience drawing characters that were overweight, so I defaulted to this sort of not really overweight version of her. That’s also why Mike is so weirdly porpotioned in the early days. Of course no one ever notices that because he’s a dude so no one really cares.