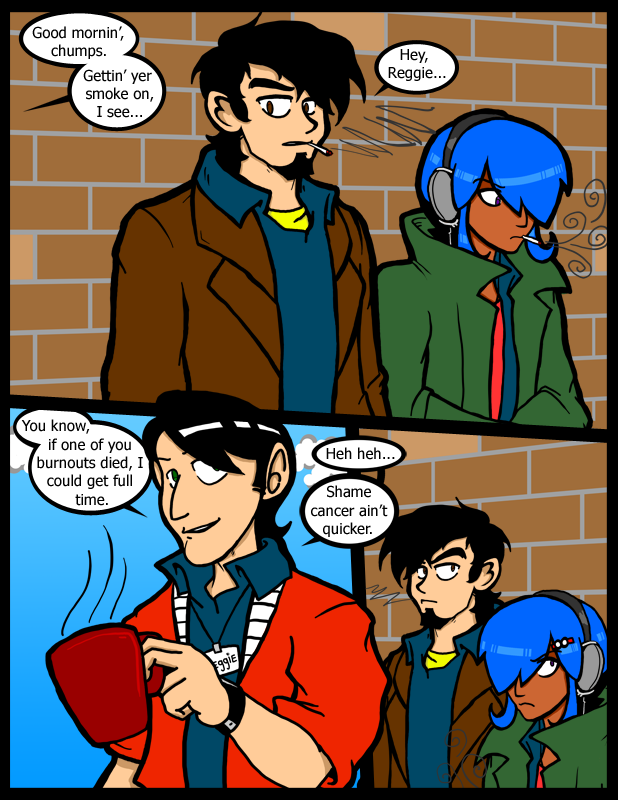 He’s been mentioned before, in passing, and now he’s here. I’m not going to ruin the fun of learning about Reggie by laying it out here, but I hope you guys enjoy getting to know him.

I also added some stuff to the shop that has the heart design from Nina’s hat on it.  Mostly because I wanted a pin for myself, but maybe you want one as well.  It’s under “new stuff” on the navigation bar up top, because I don’t know how to change it to the word store, or some variation on the words store, stuff, & new.

Of course, none of the new stuff has shown up on the list yet, but at some point it will be there.

It’s the same kind of dark humor ribbing Tom might say just as readily (to John, at least) but we’re more willing to react angrily to Reggie, saying the same thing.

You wonder why? Because Tom is better looking?

It’s the same kind of dark humor ribbing Tom might say just as readily (to John, at least) but we’re more willing to react angrily to Reggie, saying the same thing.

You wonder why? Because Tom is better looking?

(After looking ahead to the next page)

…Or, is it just that we ALL read at least SOME Archie comics back in the day, and this Reggie is heavily inspired by that one?

Wow He kinda looks like a mix between the green skinned bully from Doug and Marty McFly’s dad in the past. I hate him already. I also think it’s interesting that you have kept this going on for so long and this is the first time we have a real antagonist. Well other than that creepy guy who is crazy about Carol, and the Ex girlfriend we have yet to meet. Looking forward to that.

Wow, we just met him and already I want to punch him in the face. Well done.

He should watch his ass, though, because Brooksie’s a freakin’ ninja.

Dear god. I already hate him. What he said really didn’t sound like a joke. What a douche. I foresee Ed destroying him someday.

My, he’s every bit the asshole they said he is.

“Well other than that creepy guy who is crazy about Carol” O.o You mean Thomas? I’m bad with names and I stick a lot of characters with nicknames, but creepy? and forgetting the main characters name? Ehhh Anyways, I agree with the above statements, this will be a long lasting rivalry.

Your title explains it all: Reggie is a bastard up in the higher calibers.

Heck I want to punch this guy in the face. Actually… I want to snipe his coffee mug while hes sitting down drinking his hot coffee.

okay, I hate him already. lol.

I know my mullets, and that, kind sir, is not a mullet.

I dunno, he just doesn’t seem all that evil to me. The cancer joke is like he doesn’t understand boundaries.

His is the casual evil of the self-centered.Reggie’s on his way to growing to the role of the sociopath. Albeit a low-functioning one. :)

I think ‘creepy guy who is crazy about Carol’ was the emo Snape lookalike who had friends waiting outside and plotted to make Carol his. Anyway, just started reading today, went through the archives and can’t wait for more!

I can hardly believe that nobody has commented on this guys totally amazing aspirations!

At Bartertown? Gee-Wizz! He’s got some goals in mind, huh?

@ Jallice: I believe that C-Ham was referring to the creepy skater/punk/scenester kid that came in and asked Carol out sometime in the beginning. Go back and read the archive.

Reggie seems like a big dick. I wouldn’t mind kicking him in the crotch several times.

Yeah, if this was an animated cartoon, I think I could match him to a good voice.

Wow, yeah that guy couldn’t scream douchebag more if he had a popped collar to go along with the smartass weasel look.

I know everyone’s already said this, but to call him an “asshole” would be too much of an insult to assholes everywhere. Could I please punch him? Please? I don’t usually condone violence, but…

Hey Jalice, yeah I was talking about that creepy dude that said one day carol would be his, thanks to the other few people for pointing that out too.

Ohohohoh OK, I get it now. Sorry if I sounded mean or anything. I was a bit tired again, and Summer always gets to me. As for the “Go back and read the archive.” I have, I always read the beginning and by then I gotta read the middle, so I end up even going through a 1000 page archive ^.^; Anyways, again my apologies if I sounded mean.

I just noticed how far this has come from the other beginning comics where people asked if the comments were broken or something :P The comments are now 3 times as big as the comic, lol. Also, *waves* Hello, Phantasm!!

What a smirking dickhead!

Oh, man, I cannot stop staring at the cuteness that is Brooksie. She keeps on looking away ’cause she’s too shy to make a comeback, and she makes “Ungh, you’re annoying and I hate you” faces.

Yeah, Reggie reminds me of someone, but I don’t know who… hm… Reggie from Archie Comics? …I take that back. Either way, you managed to find the perfect annoying personality for him….

I like him and hate hime. Go Reggie beat them all…….except Brooksie and Ed :D

Dude, Ed’s going to KILL him

I want to implant my seed in his man-gina.

[Incidentally… I’m of troll-descent… so of course I like antagonists.]

While I despise the term ‘douche ‘ to be used in any form, mostly due to its supreme overusage, (I mean, the f-bomb didn’t get old so quickly,) I must resign to the fact that this fecal forest can only be given the proper title of Duke Douche of Dunghill. Bravo on creating more suck assholeness in a character in one panel than Martin Sheen takes to build up to in a full movie.

…I hate this guy already.

I’m getting my sword.

…Wait… Is this Reggie… From the Archie comics? Cuz it sure looks like him o.O

Wow, one page in, and all ready wishing for his co-workers’ deaths? Truly a new low for humankind…

“Yeah, if this was an animated cartoon, I think I could match him to a good voice.”

Wow what a dick… he should try to cross the street… and get hit.. by a bus.. filled with napalm.. yeah naplam… it’s a good thing…

Hate him already, especially since he’s the one to prove the point I made on the previous page.

After the Archie comic books I grew up with, anyone named “Reggie” is automatically assumed to be a douchebag.

Well, I must say, that one frame from him perfectly captures how much of a idiot and moron he is. Well done for a quick scene to state a characters personality. Something that is tough to do.

Why does Reggie look so much like Crave’s avatar?

Cause that’s who I used to make it mostly.

I’ve tried to break myself of the habit over the years, but sometimes it still squeaks out…

Me. Sometimes.
If they took me seriously, I wouldn’t still be employed.