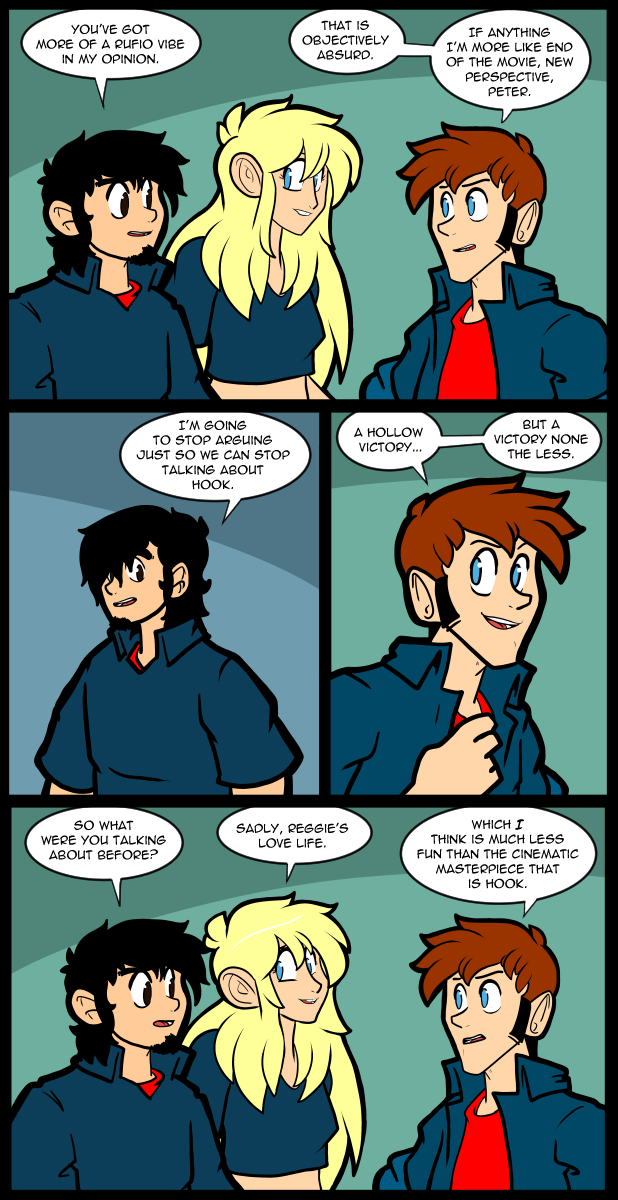 As you may have guessed from the continually late pages, I am not doing very well. In fact things are deteriorating at a frankly panic inducing rate. I’m beginning to feel a bit like Job with all the bullshit I have to deal with that is caused by no fault of my own. The patreon dipped below 1000, which isn’t the end of the world, but it really gets to me psychologically. I felt like I had finally achieved a level of support that I was going to stay above. Although with my ever decreasing output, and the forces of the economy, I can hardly blame people for wandering off. Unfortunately I’ve reached the limit of what I can bear. I’m doing the best I can & it’s not good enough. I’m going to have to fight harder or die in the attempt. Either way my problem will be solved. From where I’m going to pull this extra effort is beyond me, but I’m going down swinging.

Prince Rufio: “I’ll protect you from the pirates.”

Sad to hear it’s going so bad Jackie. As I’m a struggling artist who lives for his work myself, I know the feeling of the world seeming to be against you in times unfortunately all to well. Although I can’t support you with money (I simply don’t have it), I wóuld like to express my admiration for your unfaltering work ethic, your admirable efforts for your family, and your simply wónderful online comic …which brings a lót of people a bit of fun in an ever darkening world. You have my thanks and continual moral support (for all the good thát does you …sorry!). Never give up, never surrender! Greetings from The Netherlands.

Something you might try is to have more than just the $1 option in Patreon and SubscribeStar. Say, options for $2, $3 and maybe $5. No extra content, just the option to pay more each month. I know you have stated previously that you don’t want to charge more than $1, but the fact is that people have different disposable incomes, and inflation is a thing too. For many people the difference between $1 and $2 per month is negligible, and those who have a well-paying job might be willing to pay even more.

Maybe it helps a little, maybe it won’t, but it doesn’t cost anything to try. Of course you would have to mention it in your Patreon push occasionally too.

…and remember Patreon asks the artist to pay the processing fees. There’s a lot of fixed costs that Patreon puts on a payment and those costs take the biggest bite out of a $1 sub.

You can voluntarily raise your subscription above $1 if you want. Jackie doesn’t have to create a higher tier, though I’m sure that would make it easier. I subscribe above the $1 level myself.

Anyone that can double up to $2/month is cordially invited to do so.

I’m currently at $3 per month, if I recall correctly.

Ah right, you can do it via profile pic -> Manage memberships -> Edit. I was looking at the My membership tab on creator page which doesn’t let you do that. Upped my contribution.

Still, current tier structure heavily guides people toward $1 payment. On the other hand, fixing that mostly affects new subscribers. So those current subscribers who can increase their contribution, please do!

Yup, bumped mine up too.

I would happily pay more for the content that I spend $2 on each month via Subscribestar and Patreon.

I thought patreon allowed for people to pay amounts that weren’t linked to tiers?

Patreon certainly does; I pay custom amounts to all but one of the people I patron. IIRC there’s a “manage payments” tab or something of the sort where you can quickly access and change each support amount.

Hang in there. I am willing to bet that the loss of paying subscribers is just as much to do with the fact that times are hard for many people right now and not just that your content is a little late. Personally I don’t mind if it is late, or even if you have to skip a day, mental health is important. Keep in mind if your health is not good we might get no content from you, and I would rather read it less often than not at all.
Hang in there.

I know you have a book on lulu (only because I clicked on the book link, I have never heard of lulu before.) But you might think about trying the amazon kindle direct publishing https://kdp.amazon.com/en_US/ you create the cover art, format the pages to fit in their guide lines of different sizes, and set the price. People then buy it, either digital or paper or hardback, amazon prints its to order, it may be hard to get going, but its a free to create thing, they take a percent of the sale, and potential new revenue stream. Times suck right now, but it has to get better some time…thats what I keep telling my self any way.

I strongly suggest that if you go electronic, you also include .epub, which is non-proprietary. I get my e-books via Kobo in Canada, and a lot of other e-bookstores support .epub around the world.

If you would, can you tell us how many Paetron subscribers you need to get, to stay in [business], + keep the comic going?

If you do, then we, the readers, can try to spread the word on twitter, + by re-tweets, and by other social media ways- to get you the Paetron subscribers that you need.

FWIW, Jackie you’re at 1001 patrons, as i write this. And I’m trying to figure out how to increase my payment to you. Wish me luck there.

I never say much, and with the way the world is right now I can’t offer as much as I’d like to, you’re one of the only creators I’ve ever seen who could so often and consistently make such good content, so for what it’s worth, I’ve upped my patreon to what I can. I wish you all the best and for what it’s worth, you’ll have my support for as long as you’re willing to take it regardless of anything.

I got a promotion so I can afford to throw 5 bucks in the hat each month. Hope it helps, Jackie.

Also, I concur that it might help to create more tiers–alot of people don’t realize you can customize how much you pledge to each creator on Patreon and if they only see $1, that’s all you’re getting from them.

Addendum; Patreon apparently won’t let me see content reserved for the $1 dollar tier despite recognizing that I am a Patron who put in more, so now I definitely recommend a higher tier or two, if that’s the only way people can see such stuff and ALSO donate more than a buck.