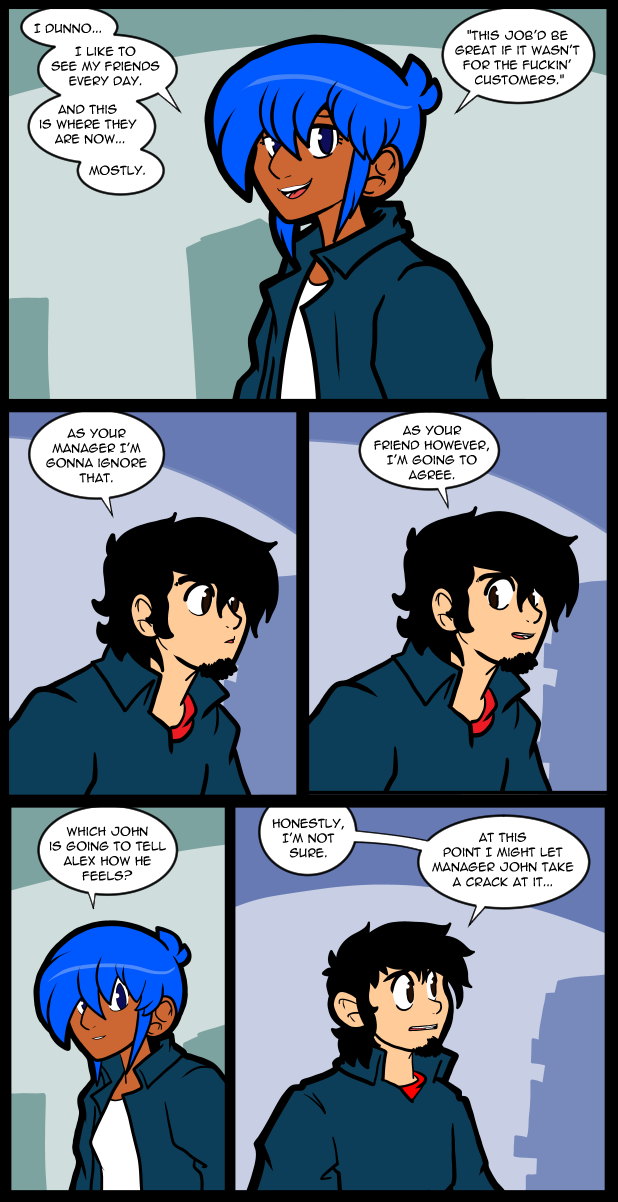 It’s been a long time since Jo said direct movie quote. Let alone one from Clerks. I actually didn’t like Clerks the first time I saw it. I hadn’t had a job with real customer interaction at that point, so it didn’t resonate with me until after I’d actually been in the shit. The movie that changed my mind about Kevin Smith was Mallrats. In many ways Between Failures is much more similar tonally to that film than Clerks. Although, as I often say, Empire Records is probably the closest of any film to being a near match altogether. I forget who directed it at the moment though… All three of those movies feature businesses that are no longer staples of American culture; A record store, a movie rental store, & a mall. They exist in some form, but nothing like the ubiquity they enjoyed in the 80s & 90s. I’m sure there are even new readers from time to time who have never set foot in a movie rental store. As time goes on I expect that will be more and more common. Assuming new readers ever find my work, but don’t get me started on that. Even at the time I started making Between Failures rental stores were in the early stages of their decline. I remember renting DVDs via the post with Netflix. In fact there are probably blogs where I mention it before we got good enough internet service to actually stream movies. Record stores are always going to exist, but not the way the corporate ones did in the 90s. Music aficionados will keep the local specialty shops open forever, but we’ll likely never see the chain dedicated music store ever again. That’s not a terrible loss or anything, but at the same time an uncurated music store allows for a type of browsing that you can’t experience in our algorithmic world now. A vast sea of CDs that you can just pick over is better in some ways than whatever youtube thinks it can get you to listen to for increased attention time.
Movie rental is sort of similar in that no service allows you to look through titles at the speed you could just walk down an aisle. Maybe someday technology will allow us to browse at a decent speed but it can’t do it now. Plus there is also the algorithmic meddling to take into account.
Anyway, the world changes & I remember old times. Nothing new there. Do I long for those times? Not expressly. In some ways though.

One thing I don’t miss is not having anyone support my work. I very much enjoy the fact that so many people do through Patreon and other things. I would like to have more people do that very thing, so I am mentioning it in case someone new, with expendable income, and a tolerance for my rambling might be enticed. Am I the ultimate salesman? Possibly.

Well. The other day, wife and I were in a Wal Mart and their electronics dept had a rack of vinyl albums, and record players along with MP4 players and digital media stuff.

We also still have ONE Blockbuster store somewhere in Bend,Oregon.. though I ain’t rightly sure if they still do rentals or if its just sales.

I believe they do rentals, but last I heard, they also rent out the entire store for private parties. Or, at least, they did at one point. Some kind of charity function, I believe.

Heh.
My home town had the last Blockbuster store in the country
https://www.newshub.co.nz/home/entertainment/2020/01/credits-roll-on-nz-s-last-blockbuster-video-store.html

And I used to work for a firm that did the storage and logistics for Sony + EMI + Warner here in NZ.

And they HATED vinyl with a passion.
Fragile.
Flammable.
Toxic.

They had to get special insurance for the building just because they stored it.

I miss video stores very deeply. With Family Video’s closure, pretty much the last of them is gone. That’s an entire way of life just vanished.

Malls at least still exist, though without many of the things that made them truly great. Arcades, bookstores, and even many toy stores are gone from them, leaving us with little more than great expanses of clothing in various kinds, and usually not clothing intended for the big and / or tall.

I have seen mall arcades start to make something of a comeback, though they’re less about games than they are about claw machines and other near-scams. This development leaves me quite heartbroken.

Not all arcades though. Some are making a proper comeback through the resurgence of pinball with a few video machines sprinkled in for good measure. The other chance games like claw machines are situated in the corners. Galloping Ghost arcade is one good example.

Nice clerks reference. Makes me want to ask if those contractors on the second death star are at fault.

I remember browsing the record rack even before I had a record player. The album covers just fascinated me. Even when most of my listening was on cassette I still browsed the albums.
It would be nice if the algorithm had a slider bar to control randomness. I’ll grant that I have a fairly focused range of interests but every so often I have to clear my history or go in anonymously just to get a little variety.

If you, or anyone else, would like to see a free site- with [photos of the album covers for vinyl records], please look at this site:

[The vinyl album covers site] not only shows you the cool art on each of the sound/music records that the site catalogs, but the site also shows you 1] the labels on the record, and 2] it shows any items that were sold with the record,+ put in the record cover, such as liner notes.

(p.s.- a record cover is a type of container, like a big, cardboard envelope, if you’ve never seen one before.)

As a former clerk myself, I always felt that the alternate original ending was far more appropriate to both the film and reality in general.

Of course, my first overnight shift as a clerk in Overland Park KS, the 7-11 on the opposite side of the highway from my store was robbed and the night clerk was killed. So that may have colored my perception of “Clerks”

Anyone else remember weekly changes in Top 40 45s in stock at a department store, complete with a printed flyer of the records?

The idea that a Boscov’s or such (not Strawberries, not Tower) would take the effort to ship back 45s every week, hand-picking them out of a rack and boxing them up…

I realized last week when looking for a birthday gift for my mum, that a second-hand store is now the only record store in my city – and it’s a city of over a quarter million people

I believe my local Blockbuster was closed by the time I found this comic. I can’t rightly remember when exactly it happened though. I know for sure that we rented Gamecube games there, but don’t remember renting any Wii games, so that’s an estimated timeframe if nothing else

I can empathize easily. During my time in the hospitality/service industry, I have had complaints including such wonders as ‘My iced caramel frapachino tastes of coffee, and its cold.’
Theres a reason I loved the line from Tank Police ‘hes a few brain cells short of a pair’

I bought Deliverance on vhs when a local mom and pop video rental place was selling out. I popped it in the vcr and sat through about a dozen Mary Kate and Ashley Olsen previews, and I thought,”Thats kinda wierd.” I’d been led to believe that Deliverance was not the kinda movie to be associated with such. Pulled out the tape, and it was Mary Kate and Ashley Olsen vacation or something. I mentioned it to the lady at the video rental store later, and she ran to the sale tapes-“Oh my God, Oh my God, Oh my God….Oh, thank God” When she pulled the Mary Kate& co tape case with Deliverance inside. So I got the actual movie, but I never have sat down to watch it.

No, see, it would have been hilarious to never bring this to the store’s attention.

That’s like the people who buy talking Barbies and GI Joes, take them home, swap the talking mechanisms, shrink wrap the figures back into their original packages, and then covertly place them back on store shelves.

It’s not a crime, they legitimately bought the figures. It’ll just freak out the kids; some girl who gets a Barbie who growls “Eat lead, sucka!” while some boy gets a GI Joe who says “Which pink dress should I where to the party?” in a high pitched voice.

“Wow, these guys are just like my first-grade teachers. Where is the bearded pregnant strong beautiful transman?”

I make a weekly post to Netflix and Hulu on their various pages.

STOP TRYING TO THINK FOR ME LET ME FREAKING BROWSE ALL and sort from there.

JUST GIVE ME A BIG HONKING FILE LIST AND ILL FIND WHAT I WANT. Put em in alphabetical order by TITLE.

I feel you bro

I don’t see record stores going on forever, I only see them lasting until humanity ceases to be, which could be the result of the universe collapsing in on itself.

I said those very words 30 years ago as Manager of a Hollywood Video.