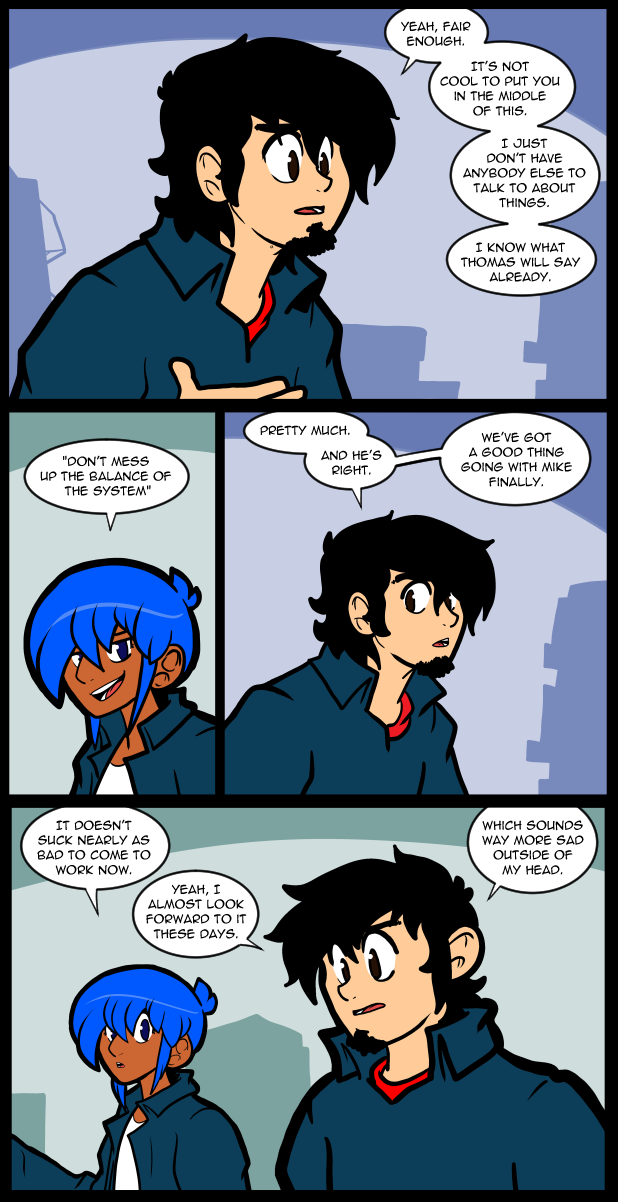 Jo is doing an impression of Thomas in panel 2, in case it wasn’t obvious. For the record, she matches his cadence perfectly, although not his actual vocal pitch. I think it says somethinbg about him that his friends think they know exactly what he would say, if not exactly how he might say it. Although there is always a chance that he would err on the side of romance. He’s been known to break a rule from time to time. Even his own.

I, however, will not break my self imposed rule to mention Patreon at the end of every post. Even though I think people are starting to tune it out. Probably I need to sneak it around so people don’t see it coming. Like an an invisible man having sex.

As all things should be

Nah, you should mention Patreon every couple of sentences just so the point is clearly conveyed. Why not? Creators need financial support, that’s just how it is. Your comic is good, so warrants backing from those reading it. Don’t see why you should have to feel apologetic, you give it for free!

Brookside does her Thomas impression, Thomas has done his Reggie (in the Name Tag scene).

Who’s gonna do the next one?

There’s a certain charm to people knowing what their mutual friend will say, and how they’ll say it. And nailing your friend’s actual vocal mannerisms are always funny.

Is the invisible man having sex with an invisible partner, or can we see the partner in all their glory?

The Invisible Man?
Please, show him to me!

Another fictional movie trope. Thank you for making this comic.