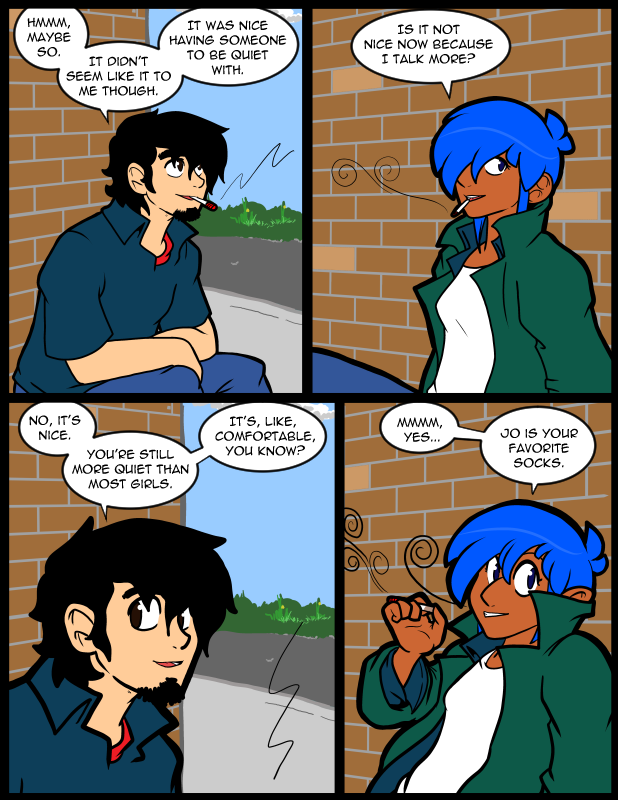 You know, I didn’t intend for these to be numbered pages. The plan was to make these some kind of extra thing, like the onlyfans riff, but I’ve been so stressed that I messed up and started numbering them like normal. It doesn’t matter because this can fit basically anywhere, but it was unintentional. I can write my way through accidents because my style is basically structured riffing most of the time anyway. It’s not something I realized was a talent for a long time, but at some point I noticed that not everyone can do it. That makes it valuable. On some level at any rate.
It’s something I can do because as a kid I was always trying to predict the actions of other people. Always trying to protect myself from people by anticipating their attacks. I would think about all the various things a person might do, or say, and how to react to them. Hundreds of millions of situations over the course of my life. What do you do if the person at the post office is mean? How do you act if someone makes fun of you? If a friend suddenly betrays you how do you protect yourself? If they do this, I do this, if they do that I do this. I say this, they say that, I say this…
I can do it so fast now I barely even think about it. I don’t know if it’s maladaptive behavior, or just the way I decided to cope with things. It’s why I always have something mean to say. Learning to spot someone’s deepest insecurities so you can hit back harder if they hit you first. Then you learn to strike first so they can’t hit you at all. Of course, no matter how good you are at guessing what someone might do, there’s still a chance you’ll be wrong, but you remove the element of chance by choosing for them. It become proactive instead of reactive. You make the choice, you have control… You shut the door first do someone can’t shut it on you. Then, many years later, you’re alone in a room drawing pictures for strangers.

I saw someone I hadn’t seen in years. A passing acquaintance from school. At one point they said that everyone was terrified of me because I could dress people down so quickly. To them I was the bully, but from my perspective they were. It’s no wonder humans fight all the time. It’s very difficult being sentient.

What isn’t difficult is supporting me on Patreon. Well, it’s not super difficult. It can be trying at times… Okay, it’s not the most difficult thing to use Patreon, but I don’t have verifiably better options at present. Anyway, please consider supporting my work. I’m too old to start over.

Is she going to tell John about Alex and Reggie? Will she encourage him to keep pursuing Alex or to give up?

Who can say? It’s a mystery.

I’m living proof that it’s not too hard to donate using Patreon. I figured it out! Then I had a cookie.

Jackie, your description of your backstory is haunting. I hope things are going better for you these days. Being alone in a room drawing for strangers is a sad lens, but an equally valid lens is that you are using the Internet to make many strangers a bit happier. In my opinion, your comic is a treasure. I’m still reading it after lo these many years. You have made these imaginary characters come to life for me… I’m invested.

Even your little throwaway comics like this current one-off storyline are enjoyable. Keep up the good work, and try to enjoy yourself as much as you can.

You would be a good Dungeon Master.

Jackie, you have to keep reminding us that your “filler” strips are filler, because we your readers just consume them as if they were normal ones.

x2! You could maybe even not tell anyone, and we’d never know.

I have a nasty habit of telling the truth.

(Said in an excited voice)- “I show only the truth!”
…A quote attributed to the late-1800s painter, Mr. Toulouse-Lautrec.

“I hope things are going better for you these days. Being alone in a room drawing for strangers is a sad lens, but an equally valid lens is that you are using the Internet to make many strangers a bit happier.”

– Ha, no!! :-D Actually it is only labeled as ‘sad’ by an unhealthily extravert-praising culture. The Inter-net maybe the tool for intraverts to connect. You know, those people who did not suffer that much staying at home, who can be fine by themselves, or who are sometimes socially awkward (back at a socially or morally awkward society), who have found internal refuge from external misgivings, and often have more stuff going on within than from outside – like around half the population. The only tragic part is that the mainstreamed story does not fit.

Being in a room by yourself drawing can be super peaceful and meaningful.
Most important mental stuff is created in deep engrossment and contemplation leads to happiness long-term.
But beware, it’s not like the mind cannot chatter out as own enemy. So, an escape is shutting it off at times or making peace with it.

As a punchline, it was good though.
Sometimes, firing off a creative retort that noone gets at first and comes at them like a bumerang is more wickedly fascinating than holding up the emotional safety net for the insecure, and might actually be a service long-term, if it challenges in right direction and they manage to grow over it, like salty-sweet tastes it attacks you first and insults your dignity, but then can be oddly fulfilling deep down. Then again, it can fail badly, and you end up scarring the person, back.

That’s not to say, that one could not cyber-bully from a room if one wanted to.

It is quite humbling to hear your story how to prepare and guard against bullying and avoid having past hurts inflicted again. I’m sorry to hear the circumstances that led to it. Though the coping you developed seems quite useful in itself and again was protective, and you even turned it into a pro-social behavior long term. like tough love.

That includes definitely the idiots (!!) around us and how bad they had it coming and failed to manage, for sure. Everyone in their own peculiar, funny disastrous way. And then our sorry selves how we did not manage to lift them out of the closed mindset.
In the end, the true strength resides in coming back, eventually making peace, breaking the cycle, when the time feels safe enough – and seeing our past selves for the fools we were. Entertaining, balling, struggling fools. On a larger scale, evolution will crunch us anyway, but not yet this time, we have huddled into our niches.

But of course I grew up alongside modern tech, so the usage itself comes second nature to me

This is one rule that I’ve learned-
Try not to look up a bully(s) that were in your school, from about 4 or more years ago.

I found blog-type sites that mentioned two bullies that I knew…and that was a mistake. Ugh. man.

If you have any amount of conscious, like I do,…you might find that one or more of them now look kind of…very unhappy, or almost friendless, + then you’ll feel like crap for looking them up just to find dirt on them.
“Let sleeping dogs lie”, or some kind of idea like that. Hm.

I do take slight issue with Jon saying Jo’s more quiet than “most girls” instead of “most people”, cause as someone who gets talked over a lot and easily overwhelmed by noise I notice that women both talk over me less /and/ don’t talk as loud as men.
Although maybe this is just an example of Jon’s learned sexism that he hasn’t gotten to unlearning yet, I do know people tend to perceive women as dominating the conversation if they take up an equal portion of it instead of the customary 30%.

I think it’s more like John tends to be attracted to mouthy bitches, so his sample is tainted.

So, is Jo supposed to be ashamed of being a “girl” (a particular *kind* of person)? Seems to me that encouraging generic mediocrity is “anti-person”.

But then, I’m neither woke nor politically correct. I prefer to be awake and actually correct.

Ironic, since your comment makes me want to take my forever nap.