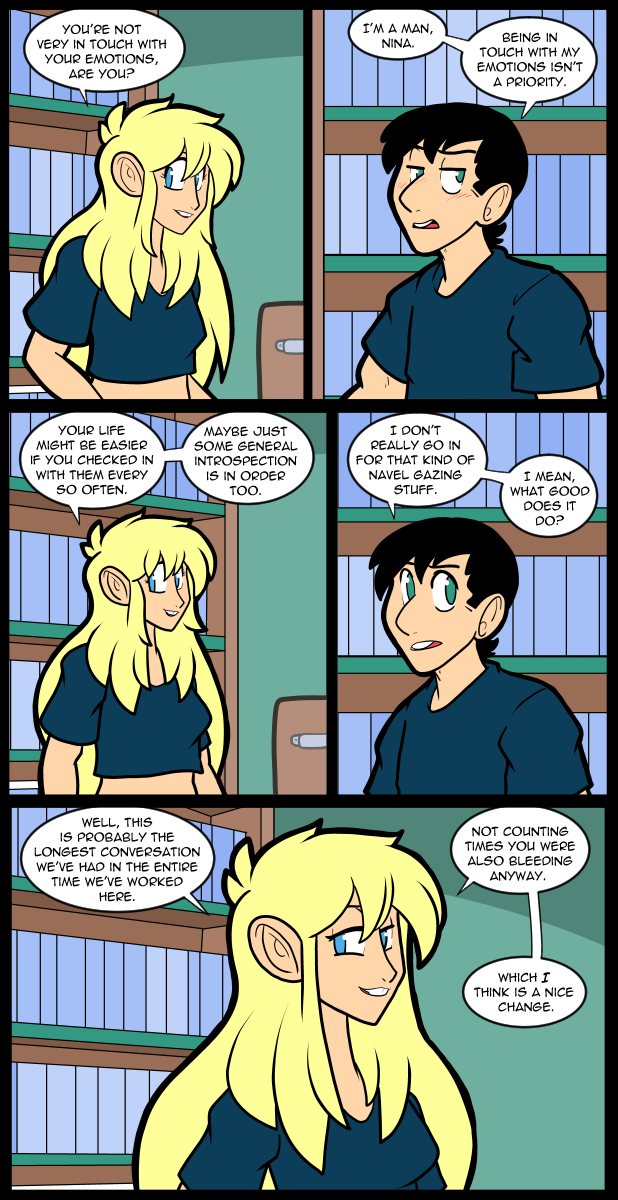 Sweet lord I am tired. It’s about 2 AM when I’m posting this page. 4 hours later than I usually would. It’s actually not uncommon for me to be up at this hour normally, but my schedule is all mixed up because Grandpa works on his own schedule, which is also on central time. I’ve been watching him for about a week & he’s had a range of good and bad days. Sometimes he knows who I am, sometimes he thinks I’m someone other than who I am, sometimes I’m a stranger.
For the first few days he would come find me in a total panic about once a day and ask me where grandma is. After that sometimes he would remember things in general for several hours. At one point he was convinced that he and I were the last living members of the entire family though, so it was still kind of up in the air at any given moment where he would be. He gave me directions about where, & how, to bury him a few times. Things that were decided back in the mid 90s after my uncle died, but he seemed afraid that no one would have told me. I think even at that time it was pretty clear even to the grandkids what the plan was going to be.
You know, now that I think about it I can’t remember where my great grandmother on my grandma’s side is buried. Or if she’s buried. Somewhere in Kansas maybe. I do remember viewing her at the time & that a bird got stuck in the grill of the car on the way there. When we found it there I seem to recall muttering to no one in particular “I hope nobody believes in omens…” She must be buried wherever that funeral home was. Somewhere around there. Kansas probably.
I think grandpa’s mom is buried in Lakin too, although I can’t remember either. She didn’t pass all that long ago. Maybe over ten years? I remember visiting her in the care home. It was actually a very nice place. Much better than any place I’ve seen before or since. It felt clean.
Anyway, that’s as may be. Without grandma’s little dog wandering around crying because she can’t find grandma Grandpa has been much less active & hasn’t had any ridiculous escapades. We did have a ten minute argument about why a person needs to wear underwear though & I have to say it’s very hard to take the arguments of a person seriously whose genitals are flapping around in the breeze. Every day is some kind of an adventure & generally the kind that has a sad theme song playing in the background.

As a bit of a side note there was a new preacher helping with the service in Lakin. A genuinely African black man who had a very particular way of articulating scripture. I found his phrasing interesting since that’s the kind of thing I pay attention to for later writing use. My dad couldn’t place his accent and I posited that he was from Uganda. I based that supposition on the fact that the way he spoke sounded like a calm version of the dialogue from Who Killed Captain Alex. We were all a bit too busy with the proceedings to get any answers at the time, but it happened that several days later dad talked to a friend who attends services at that church. Sure enough, he was from Uganda. I guess I missed my chance to ask if he knew de way. We actually got a relatively detailed report of his frankly quite interesting life, but I won’t relate the long version. In brief his father sent he and his brother to school in America and they ended up in Kansas because they needed priests. I don’t know if they intend to settle in America but they could have a nice secure life in Kansas if they were of a mind to. That’s neither here nor there though, I guess. I do expect I’ll be seeing more of them as more relatives make the journey to the great beyond though.

I’m going to try and avoid that journey for a while, but I will need money to hold off the icy grip of death. To that end please consider supporting the comic via Patreon, Subscribestar, Paypal, or… I dunno, maybe I’ll look into Kofi? Does anybody use that?

“Not counting times you were bleeding” great callback to one of nina’s best lines.

Ha ha “navel gazing” must be a common freudian slip in conversations with Nina.

That’s quite ironic considering that Nina is back to wearing her classic midriff-baring outfit and that term just came up! ;)

I’d much rather gaze at Nina’s navel than my own.

Then there’s belly and navel touching.

It’s not every day you meet someone who’s glad to talk to you without you actively bleeding.

I think people do use Kofi. I think it would be worth it for you to set it up.

Sorry to hear that you have a rough time with your grandfather. I have never had to take care of someone who was losing their faculties and I can only imagine it must be tough.

We have to wear underwear because God ordained it in the Bible (He’s a boxer guy, BTW). (Check out Exodus 28:42.)

I think this is where the Mormons get their “magic underwear” beliefs from.

Fairly certain that passage specifically concerns Priestly Garments to be worn in the Temple. Not sure if there are instructions concerning underwear for common folks. Other than that articles of clothing must not be made of both wool and linen.

Definitely boxers for the Priests, though.

One thing I’ve learned on my travels is how people articulate their English, based on whatever their mother tongue may be. Choice of diction is quite interesting…in ASEAN: takeaway/to go (food), Pax = per person, most words that take more than 4-5 syllables are really tough to pronounce depending on their original language. I don’t judge here, learning a whole other language is extremely difficult, and most Americans don’t bother after school. Still, accents can be so strong it’s tough to parse out what someone is saying. Some folks I’d understand about 50-70% of what someone was saying, usually Cantonese or Indian. Filipines and Thailand generally easier or perfect. Japan was mixed levels of skill. It really depends on the individual, how dedicated they are to honing their skill. Some languages just don’t mesh well with English, becoming another obstacle to overcome. Learning English is an asset for job hunting outside the USA and I can nearly guarantee that your Ugandan friend’s English skills were taken into consideration when he transferred there. Good job picking out his accent tho, impressive! It’s not something I can do easily and I always shocked how others can pick that out.

If you really LIKE to hear different accents, there is this site, called The Speech Accent Archive. Here’s the address:

Click on the section that says, “browse”, to hear how someone, whose 1st language is French, or Korean, or other, says some English sentences.

Oh right- for an easy way to use that site- hit “browse”, then hit “language”, to pick the accents that you want to hear.

Wow, thank you! Will check this out!

Well it improves your mental health Reggie and makes it less likely that moments of strong emotion break you.