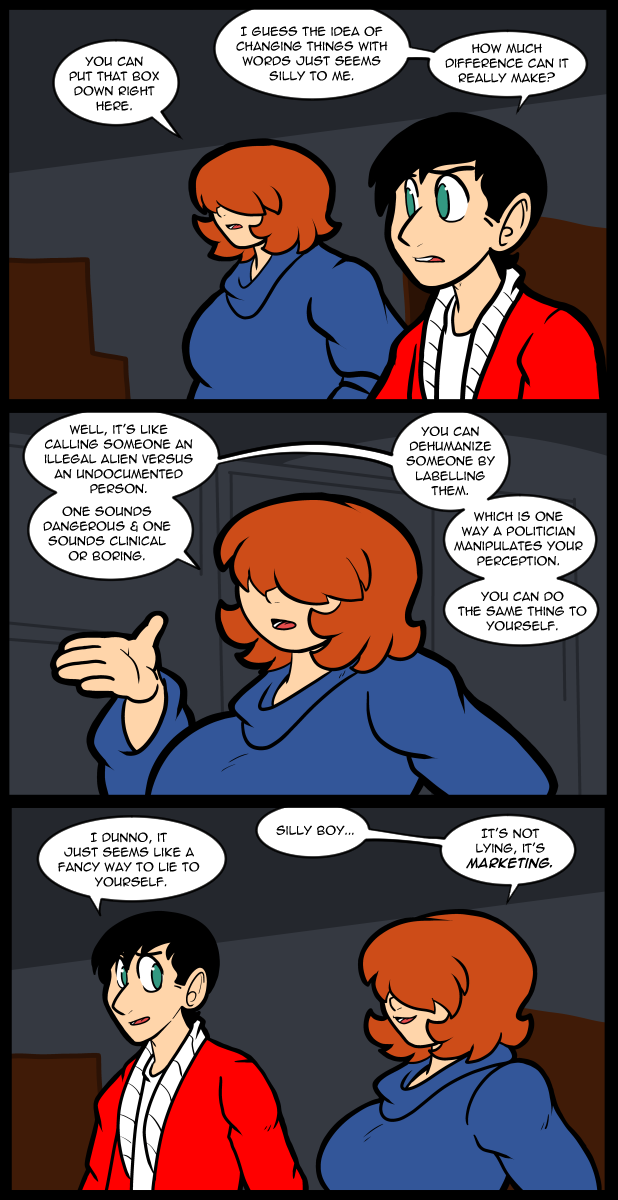 I know I’ve spoken about this concept before in the past. Not just yesterday, but years ago, and it remains relevant. It’s very easy to take language for granted but it shapes a lot of our understanding of reality. When someone tries to change a common phrase chances are it’s because they want to cause a specific result. Global warming became climate change, chairman became chairperson, mailman became postal worker, and so on. Someone somewhere decided that Latino & Latina should be traded out for Latinx & most of the people being renamed apparently weren’t consulted & aren’t down with it. Unless they put their foot down that will become the new norm though. The best manipulation tactics start small. You have to remain vigilant. As someone who is highly susceptible to marketing I have to pay a lot of attention to how people are presenting things to me because I am easily swayed by pleasant sounding words. It’s a good idea to keep your guard up, especially in times like we’re living in now.

As a latino I appreciate your take on the matter. Trying to explain this is frustrating.

What, that it’s just a wee bit racist for a bunch of white people to rename your entire race because the concept of gendered nouns just blows their minds? Yeah, it’s amazing how the very people who want to go on about racism so much don’t mind being racist themselves when one of their other hated “isms” is in the crosshairs. Not to say there isn’t plenty of racism and sexism and so on to deal with, but it’s precisely because there IS plenty to deal with that we needn’t be trying to invent problems like the sexism of “Latino” to “solve” against the wishes of the Latino population.

A French speaker I know tells me the invention of nongendered pronouns for people doesn’t have much traction among French speakers. It just seems silly to worry about that when even the words for tables and chairs have genders. Even the word for vagina has a gender, and it’s not feminine.

I like this framing. You’re attempting to sell yourself a better future.

I was reminded of this…. https://www.youtube.com/watch?v=o25I2fzFGoY

As Carlin pointed out, we think in language. Change the language and you change how people think.

Personally I thought this short story could be too absurd for reality but these days I think it could be closer to the truth…. https://en.wikipedia.org/wiki/Harrison_Bergeron

As a NATIVE American, I find Illegal Alien the PROPER term. I hate the entire WOKE nonsense and want it OUT of my entertainment.

Does the term apply to all of the rest of us then for not abiding by indigenous legal systems when we decided this landmass looked nice regardless of the folks already living here?

which indigenous nation and people are you speaking of, as they constantly warred and destroyed each other well before our arrival? Are you suggesting they shouldn’t have defended themselves either? seems strange that we should give them anything in that case, since they should have been more accepting and welcoming non-native cultures migrating.

Your statement only works as long as you literally don’t do ANY thinking to follow it.

Our choices of words always frames our reality in interesting ways, and we should be mindful of that when judging others. Our language is on a conveyor belt and the polite terms always change with time.

I really like that poem, who is it by? I tried doing a google search but all that came up were links about removing ink stains, which was very much not helpful.

I understand the problems with Latinx and it’s not a hill I’d want to die on, but I do find it a bit odd for the largely Hispanic Latino population (at least that describes most people I know who identify as Latino, I’m sure some nati) to police issue of English usage.

In the case of a Latino, Latina and Latinx the reason why there’s an interest in policing this particular use of English is because it’s pertaining to the exonym that’s being used to refer to the group in question. Latinos have just as much of a right to balk at the use of Latinx against their wishes as Black people have to balk against the use of terms such as Negroid, N****, and other terms that are now adays considered offensive slurs. As long as the terminology is referring to a specific group in question then members of said group should have a say on whether they think if that term is an offensive slur or not.

Another example would be the LGBTQ community and their stances regarding words like queer or fa**ot. As the targets of said terms they’re the ones that get to decide if they find having those words used to describe them as being offensive or not.

For Latinos the sudden choice to refer to them as Latinx without any consultation / consensus of consent from the majority of their population is resulting in Latinx taking on the aspects of becoming a slur. A label for their group applied to them against their wishes by folks that aren’t part of the group in question.

eep. I never finished writing that comment and didn’t realize it had posted.

I question regarding it as a slur, but I do understand wanting some control over what other people call you. Like folks from China might prefer to be called Zh?ngguó rén because that’s how they do it in their language.

I live! Also we’re at 60 on the board people keep it coming and show our beloved entertainer our love by putting him up there. Don’t ask what your internet writer/artist can do for you, ask how we can crush another foe on the list to put our beloved artist/writer on a throne of our enemies skulls and listen to the lament of their fans…. Conan ref folks…

Are you talking about the top web comics board? I vote there every day even though this comic doesn’t appear every day.

I don’t think it’s lying or marketing. How we feel about ourselves and the world changes our personal reality. From affirmation addicts to suicide bombers, your beliefs create your world and changing the words you use has a powerful affect on your reality. Take the color blue. There are cultures who consider blue to be a shade of green and people from those cultures have significantly harder times distinguishing shades of blue or even recognizing differences. Your words are your reality and sometimes changing the word you associate can have a profound impact on your reality.

There’s reality and there’s bias. It’s easy to confuse your own biases with reality, but it isn’t useful to be biased against yourself. And misleading to be biased in your own favour. Objectivity can be difficult.

Interestingly enough, some ancient Greek texts (IIRC, the Odyssey, but I could be remembering wrong) compare the color of the ocean to wine because they cared less about hue and more about brightness, so when the ocean was a deep, dark blue, they cared more that it was deep and dark than that it was blue, meanwhile here in modern English, wine-like would be a very peculiar way to describe the ocean.

That makes so much more sense! Comparing the sea to wine always confused me, thank you for sharing.

Speaking here as a marketing major, marketing is NOT lying. Lying in marketing gets you sued. No one wants the lawyers involved.

Marketing IS, however, reframing the truth so that it’s technically correct, as the bureaucrats in “Futurama” put it. The best KIND of correct! It also helps if it can be Obi-Wan’ed away: true from a certain point of view.

Marketing doesn’t lie. If it did, it would be sued into oblivion by clouds of lawyers that would cackle as they stripped the company’s assets bare.

Reframing, it’s not just a marketing technique. It is also a therapy technique.

That’s why I feel that marketing is the devil’s work — however necessary it must be. It’s the devil’s job to get you to do what he wants (to your own hurt), while making you believe it’s your idea.

OK, I admit I may be a bit biased. As Hendrik said, objectivity can be difficult.

That’s mostly lying. If it’s true only from one perspective, that makes it false from every other perspective, so then it’s mostly false, and therefore a lie. Marketing is about how to clearly lie and yet leave yourself an out, and the lawyers don’t do anything about it because that’s their job too. It’s very hard to sue over false-advertisement in reality, because the damages are rarely high enough to matter, but look at video game ads that are basically a 2 minute video that contain nothing from the game, and have substantially better graphics than anything in the game–to any sane person, that’s lying, but what are you going to do, sue for $60? The paperwork would cost more even in small claims court.

That’s what class action suits were invented for.

This is also the concept behind whether the glass is “half-full” or “half-empty.”

Yeah!
As Carol might say: “Be NICE to her, dude! She wants to get inside your ROLODEX!”
;)

Yeah I know well about the changing of words. It just goes to show the lower quality of proper education and language usage in modern society. Those who’ve been around since the 50’s will no-doubt recognize these in there “proper context”.

Lesbian – Person/people who come from the island of Lesbos Greece

Dyke – A stoppage of land or dam in the Netherlands

None of the above does not/nor should ever have been used to describe homosexuals/homosexuality in any way, shape or form. It’s grossly incorrect and insulting to the usage of the standards of proper English.

I found this comment in the naughty corner because it set off all the red flags, but since you were trying to make a point I rescued it.

You didn’t have to but thanks anyways. It is incredible that so many words used nowadays are being used in the wrong context. The words above are just a small example of many others taken from their original context to mean something else entirely. And because of those changes they are now labeled as bad or derogatory (hence why all the red flags were set off).

In the Netherlands, the word is dijk. In English, it’s dike.

I’m not typically attracted to larger women but DAMN are you managing to make Alex attractive here. Nicely done. She’s got a good head on her shoulders.