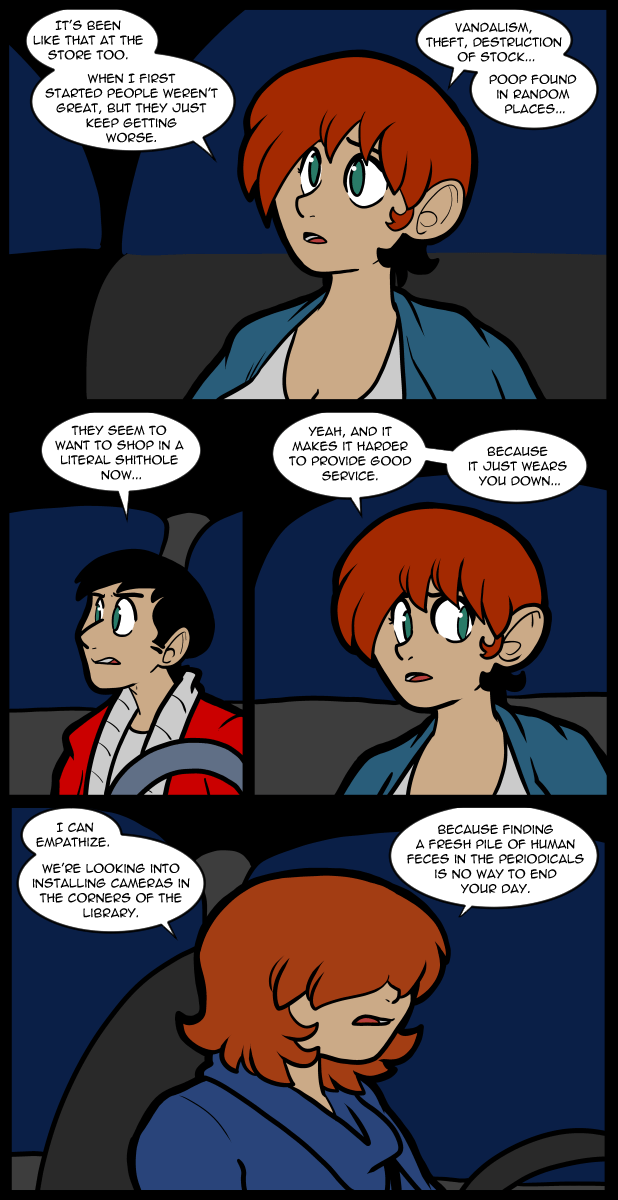 I don’t know what it was like in other places, but where I lived in Kansas, when I was working retail, all of this was true. Every year the people got worse and worse. We caught a kid stealing once and his dad wanted to fight me when I called him out on it. I don’t know if you guys know who Ethan Klein is from H3H3 Productions but this kid had the same kind of tick that he does where he would blink weirdly in rapid succession & it got worse whenever he was doing something he knew he shouldn’t be. I called him Stinky Blinky (clever, I know) because he had the tick & apparently had an aversion to bathing. Back them I could have easily taken this kids dad, but my manager wouldn’t let me. That was a rare moment where a manager actually backed me up for sticking to this kids ban from the store. He ended up lifting them ban to shut up the kid’s father, but it wasn’t like we were wrong for wanting to keep his shitty kid out. This kid’s dad kept saying it wasn’t his kid that stole, but he had to come to the store to get the little fucker when we had him in the office with handfulls of stolen Yugioh cards. Like we couldn’t tell his kid from the other kids, or even remember who he was. The fucking audacity. Trying to gaslight a whole fucking store… Makes me mad just thinking about it and that was 20 years ago.

My experience was almost the opposite. When started was a wall full of kids banned for stealing 85 cent toothbrushes. Some weird dare that was going around, steal a toothbrush. How they were all dumb enough to get caught I may never know.
Then had a couple groups of kids who would come in wearing far too large coats, do a single circuit of the store, stand in a cluster in alcohol for a few minutes, then try to walk out with a magnetically tagged bottle of Jagermeister under one of the coats. That lasted a couple months, the was just the occasional homeless guy slipping a can of soup under his shirt. We usually turned a blind eye to that.

Used to work retail at MediaPlay when it was still a thing. Every so often the men’s room would get a visit from the “mystery shitter”. I could kinda understand someone having the shits real bad and messing up the toilet. This @ss would shit not only over the toilet and surrounding floor, but the stall walls and even the ceiling.

As to shoplifting we had the occasional kids but also organized gangs who would clear out dozens of new release videos at a shot. Disney rereleases and regular new releases. Also since we were adjacent to Canada organized individuals would visit with counterfeit US money (apparently sometimes the Canadian market was saturated and they’d visit from America’s Hat to pass surplus product).

There’s a couple Canadians in a discord I’m part of, I can’t wait to see how they react to being called “America’s Hat.”

I also have heard America described as Canada’s soiled diaper so….

What does that mean?
Does it mean that, “Canada dumps on The US”, or something?
I don’t understand that.

Never been much fussed by being Americas’ hat. (Especially of you think of it as _THE_ Americas.) Hats are respectable. People aren’t wearing enough of them.

“In the 1940s, in America, EVERY type of job had its own type of uniform. And EVERY man wore a hat.”

I’m convinced that lead poisoning based mental illness is much more widespread in the US than any government entity is willing to admit.

That is entirely possible. But if true, it was worse in the past, when there was lead damn near everywhere.

This always makes me think of a line from “Good Omens” which I will now misquote; “Plutonium is good for thousands of years but arsenic, arsenic is forever.” The same goes for lead. Unless you do something to abate it, lead just sticks around.
On the flip side of this argument, I worked in a Texas state psychiatric hospital for almost 30 years and often had to do chart surveys. This included lab reports. Because of the nature of medication and the fact that we would be caring for these people, often for months there would be fairly complete blood work. I don’t recall ever seeing elevated lead levels. Our catchment area was the entire state of Texas but I wouldn’t say that there couldn’t be regional differences (Flint, MI for instance?)
Another catch to this is that the heavy metals will eventually metabolize out of the body but once the damage is done, especially early in development, you are pretty much screwed.

I think the turning point was when the started to shut down the psychiatric hospitals and try to treat everyone with meds… between the crazies now on the streets and the normal kids getting drugged up it sent everything sideways. The funny part now is people pretending that bad behavior is normal and everyone who thinks differently is damaged goods.

I think a lot of experienced mental health professionals would agree with you. The basic idea was sound. There were a lot of people unnecessarily living out their lives in institutions. Unfortunately a lot of policy makers don’t seem to have a good idea of who needs that level of service and who doesn’t. At some point it becomes more about saving money than taking care of people. The catch is all you are really doing is cooking the books. The cost of care to the community actually goes up since for many people community mental health isn’t all that effective. Insert rant on doing things for the sake of being seen to do something and milking existing ideas for ever diminishing returns rather than addressing more difficult problems.

A story from the hospital: Drunk guy is admitted in, claims he needs to be treated, but the check-up shows he is fine. The docs want to see him out again. He doesn’t want to go, gets mad, pulls down his pants in the corridor and starts shitting on the floor. Except, he had not eaten for a while, nothing comes out, he gets even angrier and presses so hard that, eventually, he manages to push out part of his intestine. Then they had to keep him after all and treat him fast to push it back in… He is very pleased with himself, but also in (righteous) pain.
… it sounds like the feces person would require a psychologist consultant. I have no idea what the staff training for this one would look like.

Retail was never a great job. Between armed robberies and man’s growing inhumanity to man, it seems to be much worse than it ever was.

Never heard so many stories involving poop. Was never like that during my stint, thankfully; remember folks, if you’re not trained in disposing of biohazards, you do not legally have to clean up other people’s poop. If anyone tries to fire you over it, get a couple witnesses and sue like crazy.

I worked in a theater in the ’80’s. We cleaned the concession stand, vacuumed the lobby, and blew down the auditoriums but even back then we weren’t allowed to touch the bathrooms. The owner had a service that came in everyday just to do the bathrooms.

One job I worked we had one client that use to finger paint with his poop. He was banned with the business shortly after the owners got tired of it.

Good to know, thank you.

Apparently there is a current trend of nsfw influencers offering titillating content from within libraries. This world has never and I am suspecting will never step up to its potential. I am now too old to even care let alone help. Good luck to us all. ~ulrich

The sad thing is, it would actually be cool, if they were just finding NSFW books and reading passages from them for content. All that potential and I’m guessing what you mean is people flashing the camera at a library. Which, aside from tge exhibitionism of doing it for all your followers rather than one person, isn’t new.

Towards the end of my time at Staples I honestly thought I had grabbed a particularly obnoxious customer and ripped his throat out with my bare teeth. I could taste the blood, feel the heat. And I was so happy that he was dead, and so sad that I would spend the rest of my life in prison. Then I came back to myself, realized I had hallucinated the entire thing, and the asshole was still talking.

I put in my two weeks’ notice the following day.

Worked in an arcade. Had someone not only poop on the floor, but wrote on the wall with it. Like, sentences.

Also had a guy graffiti on a game. When we caught him, he begged us not to call the cops because he was in the country illegally and would be deported. Bye bye, fool…

Aw, Carol looks like such an innocent naif in panel 1, in contrast with the dialogue. Happily, I have never worked in such a store.

Was a lifeguard at a city Waterpark the first few years it was open. In short order we had boys essentially spray painting fecal matter on the bathroom walls (picture a fine mist), and a few times on the ceiling. Finally figured out how they were doing it.
There were jets that would fire a column of water 3 to 4 feet in the air. Noticed a few boys sneaking over a sitting squarely atop the jet. After 5 to 10 minutes they would get up and dash aquardly to the boys room, and come out 10 minutes or so later looking much relieved. Sure enough later when we had to clean up at end of shift I’d let one of the other guys wander in to be followed immediately by crystal of “are you kidding me”, as well as many other unprintable things. I tried to explain it to my bosses, but they couldn’t believe that anyone would get a 10 minute cold water enema just to be a dick. Kids had to do a handstand to get the 15 foot ceilings (think about that pressure), not to mention the rain effect that hit them.

Yep, the other stories i could tell. A very Merry Christmas to you Jackie.