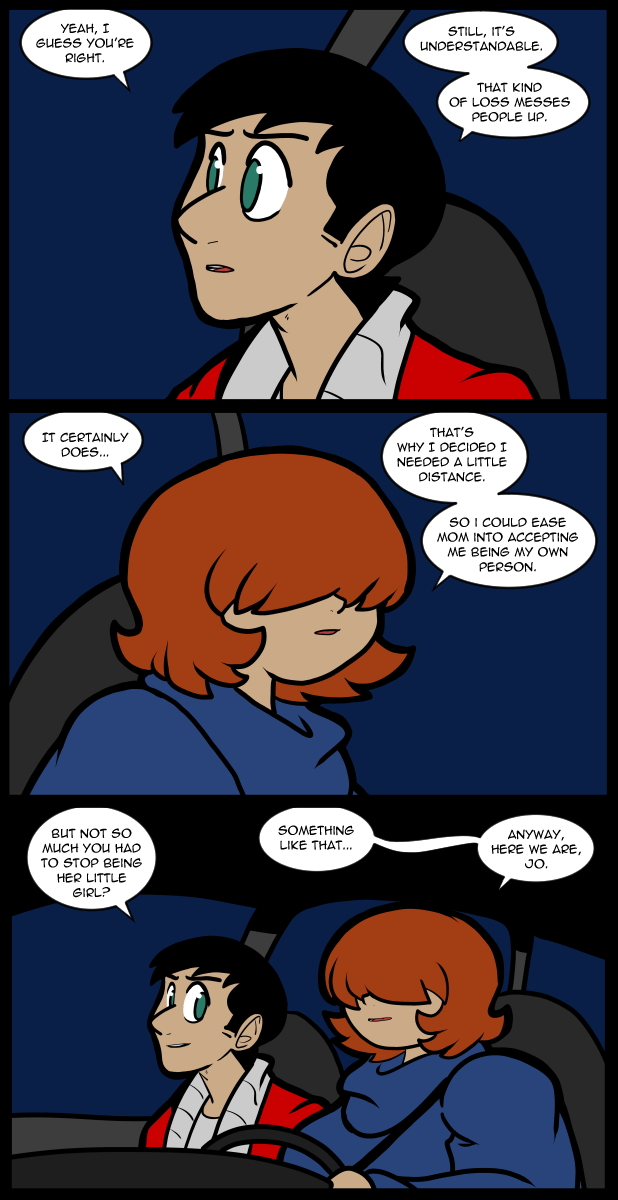 I foolishly took a benadryl before trying to make this page.

Oh man… The meaning and actual emotional weight behind Alex’s change in tone and disposition look like they’re going way over Reggie’s head. He keeps talking in his own headspace, as someone to whom such trauma is an abstraction, and she doesn’t look quite appreciative. Here’s hoping he can take that foot out of his mouth quick (or that I’m totally reading way beyond what’s going on)…

Oh, I doubt you’re reading too much into this. Reggie is DEVOURING that shoe and has no bloody idea just how thin the ice is that he’s doing the Sabre Dance on.

Yeah, make her ride along and then bench her in the back seat and not talk to her. Not cool. On the other hand, Jo may be squeeing over the front seat chemistry unfolding before her. If she is in fact even in the automobile.

I suppose that it’s time to mitigate some damage and play the devil’s advocate. We can all agree that Reggie is handling Alexandria’s luggage fairly callously and/or too lightly in tone, and that will serve to show her his inexperience. On the other hand, the latter is exactly the problem: Reggie has never felt any great loss. How could he handle death-oriented luggage when his only greatest losses were his distant, cabin dwelling ancestors, as well as his grandpa!?

Shifting from one deficiency to another, has everyone forgotten that Reggie took after his reptilian cunt of a mother? That her vindictive, snobby, coldhearted mindset impressed itself on a young boy who clearly didn’t know better. Reggie’s father wasn’t around enough to teach him a stern but gentle approach to life, so that he could handle its woes in stride, and its people with a serene mind. All things which Mrs. Boothe sorely lacked.

With both of these factors considered, it’s no wonder that Reggie is handling this conversation so poorly. One can only hope that, with Alex’s help, maybe he can start forging his own personality and developing his emotional faculties. Then he can cease to hurt feelings and start nurturing them (when necessary).

Interestingly, a lot of people seem annoyed with Reggie’s quip in the last panel, but it’s a call back to something she herself said in this conversation. I can (annoyingly) relate to him here. I struggle to deal with emotions sometimes, and make very inopportune jokes. Ask me about busting out laughing at my grand mothers funeral…. He doesn’t feel in control of this, he’s trying to get a grip on it. It’s how I’d do it too.

I love how Reggie is coming out of his (tower of snark place: Minos Righteous), he seems so real, so happy, so open here. He’s not covering and cowering behind the snark, he’s trusting, and that makes me smile and gives me hope. He may not be “On The Beam” but he’s trying, I hope she appreciates that.

As usual, no one noticed Jo is still around.
I thought from the intimacy of the conversation tgat sge had already been dropped off.