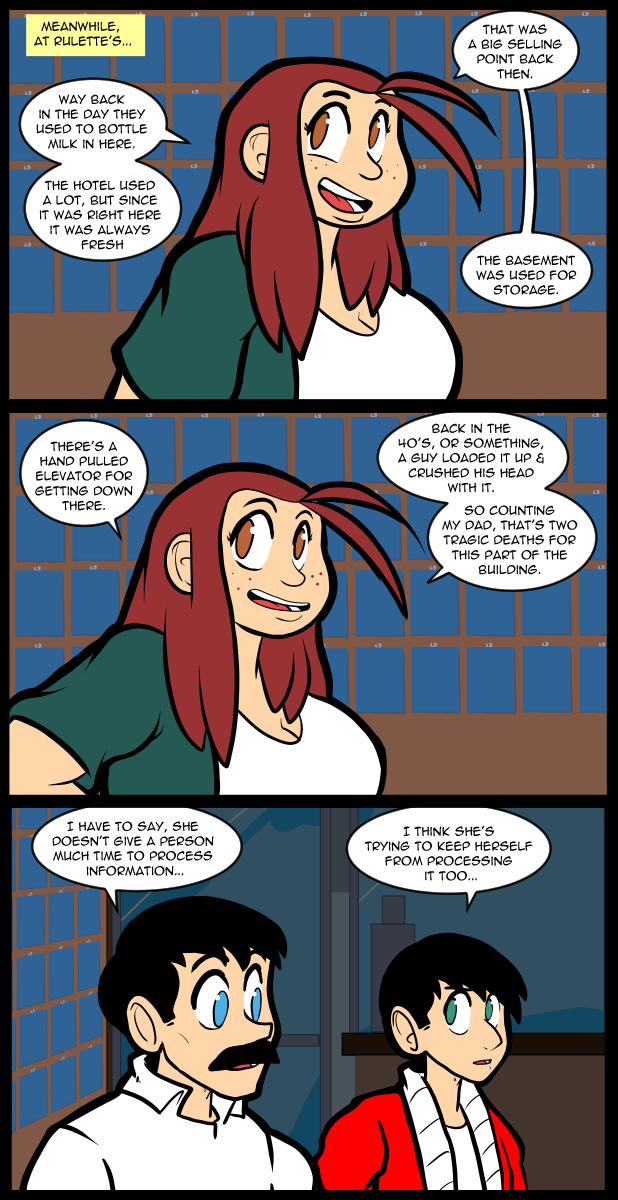 The problem with talking about the theme to WKRP in the last blog is that as soon as I think about it it’s stuck in my head. So now that’s all I can think about. Television is so different now. When I was little you had to watch wat was on when it was on, so there was a unified culture outside of TV viewing. Now that unity is very diminished. Plus the competition for your time is spread over hundreds of choices. It must make it very difficult for providers to maintain their share of the market. The same thing goes on in webcomics on a smaller scale. Which is why I started mentioning Patreon & subscribestar in every post. Well, it was kind of a joke at first too. Now people want to see how I slide it in to every post. Although I expect some people are getting tired of it. But, as I’ve previously stated, I have to make a living too & people just don’t pay attention if they’re used to something just being there for them all the time. Much like TV there are many many more options in the webcomic world to choose from now. Works by people who went to school for animation or art that can’t get jobs in their chosen fields. Meanwhile I struggle to get by with my incomplete skills against these young people, who are full of energy & new knowledge. There’s not a lot I can do about it other than keep working. I’m past the age where I can just learn things in a couple of hours. The plasticity of my brain is deteriorating. My memory fails me more often now. Time is catching up & the young are surpassing me. I guess that’s just the way of things. I must give way to the new, or find some way to survive a little longer. All the time I hear the ticking of the clock getting louder. How long will I be able to get by on sheer determination & stubbornness?

You could try running a Twitch channel for your art and collect donations as well, Jackie. If Patreon and subscribestar are lacking, a Twitch channel showcasing you doing live webcomic illustrations may help.

Watching me make this comic would be so mind numbingly boring.

It might feel that way, but it’s fascinating to see someone work their craft. Everyone works a little differently, too. I’ve learned a lot by watching others from all levels of skill.

You could make a speedpaint video, or open a streaming account to test the waters (like picarto). Do a first session free for $1 patrons, something low pressure.

You’re talking about a site where it has members watching pre-recorded videos of gorillas spinning round and round in a tub of water and fat guys wearing two piece bikinis for no apparent reason.

Plus the art channel has views averaging 200 per video.

I THINK you’ll be fine, Jackie.

“When I was little you had to watch wat was on when it was on, so there was a unified culture outside of TV viewing. Now that unity is very diminished. Plus the competition for your time is spread over hundreds of choices.”

Ha! That was a Bloom County strip back in the 80s! Opus was remarking that, back in “years past”, you could watch Jack Benny at 8 PM and know you were sharing that same moment with almost every other American. Then he changed channels and found that the EXXXtasy Channel was showing “Linda Lewd Does Louisville,” whilst Hodge-Podge pondered “S’pose we’re sharing this with Carol Burnett?”.

That kinda reminds me-
one event really bugged me:

The Pawn Stars [tv show] used have on a woman, named Olivia, as one of their store clerks/hosts.
In my view, she is a very cute woman, in glasses, + she has some fun, pop culture interests.

But- LO AND BEHOLD… [oh my goodness, no,]…
Someone in the tv biz found out that she once posed for nude pictures, in a magazine…I guess, and so she was PROMPTLY FIRED, because, in my words- the co. that owns the pawn stars show didn’t want viewers to think- “they were a co. with low morals”, or that “they…PS…hired someone with possible, low morals”. That’s a really harsh way to look at showbiz people.

Good Grief. So have her say that she doesn’t pose for those types of pics anymore, + that she won’t do them while employed by the PS show, and let her keep her job. [That’s how I see it, anyhow].

She was always [properly dressed] on the show, + [hyperbole follows]- all of the stuff she [did] on the show, was suitable to show to [mister] Curious George. Jumpy little censors + similar ppl.. ugh.

I find that very ironic considering that the nature of pawn shops have never really rested on morals. It’s either something is worth money or it isn’t.

Very true. However, I’m disappointed by the TV show’s directors’ actions, + not the actions of the pawn shop’s employees.
It doesn’t matter. whichever.

Part of me misses old TV programming, since like you said, I can’t seem to find what I want to watch out of a million things that are now in my streaming services. I get an overload of content, so I have to watch little bits of everything that looks interesting to find something I want to binge watch. This is actually why I prefer Disney+’s weekly Marvel releases – I watch one, if I don’t like it, I can skip it until something better comes. And it creates less overload.

On the other side, part of me is glad old TV programming is gone. The big cable and network stations could easily gatekeep anything I wanted to watch away from me by either moving it to a time I couldn’t watch it, or cancel it. Firefly is a great example of gatekeeping (“Oh, since it’s sci-fi, it has to perform three times better than the average drama on TV, or it’s CANCELLED.”)

Spend a few pages for a funding drive:

Call our patreon lines now to keep your favorite Between Failures plot lines running for readers like you.

Donate now at the fly-by-night level and get this 100% organic tote bag with tasteful rendition of Alex’s eye from underneath her bangs.

That’s an interesting insight into Roulette.

Question for the ages: Would you prefer $10\month for 12 months, or $120 lump/yr?
I found Roulette so abrasive at first, but tip o the hat ta’ her for chugging along and not alienating everyone. She is another one of your rare characters that are so deep I despair of gauging their depths. I would have used a double entendree, but you know how it is. Shooting fish in a barrel gets you fish, but it’s not sporting. Besides I can keep it clean. Gosh your characters are so 3-D real it’s scary.
I was reared in the heartland of suburbia, we had channels! NBC, ABC, CBS, and Metromedia! And then there were the UFO channels. (UHF stations for others). Ultra-violent Jim Henson making Chase & Sanborn commercials. Blow some muppets head off with a cannon and say that he should have used their coffee. Good old days. Then ther are the old shows all gone away. And the other paw, you have web comics that come and go, but then those that stay; like The White Board, Kevin and Kell, Dumbing, and one of my favs. “Between Failures.” Not all change is bad, not all change is good. How would you like your dough?

I prefer payments over time because it’s easier to budget for things that way. Of course having people jump in and out is an issue but either way has it’s pros and cons.

“When I was little you had to watch wat was on when it was on” Ha, it’s only a couple of weeks ago, a friend of mine talked about how he remembered when he was 6 or so (which, with us being a couple of old boys, would make it around 1970) and his family got delayed back from the weekend-shopping, so he missed his favourite cartoon – how it had felt like an absolute disaster because God only knew if he would ever get a chance to see, considering that back in those days we had all of one TV-channel here in Denmark and re-airing children’s programs wasn’t a priority for them.
“I struggle to get by with my incomplete skills against these young people” Frankly, while I enjoy good comic art as much as the next man, I primarily read comics for the story – and in that respect the youngsters have nothing on you (also, for the kind of story you’re telling your art is exactly what is needed – slick colour symphonies and and 3D effects would be totally out of place and clashing with the story)

This (see above) so much this.

It wouldn’t surprise me if she was trying to avoid processing it.