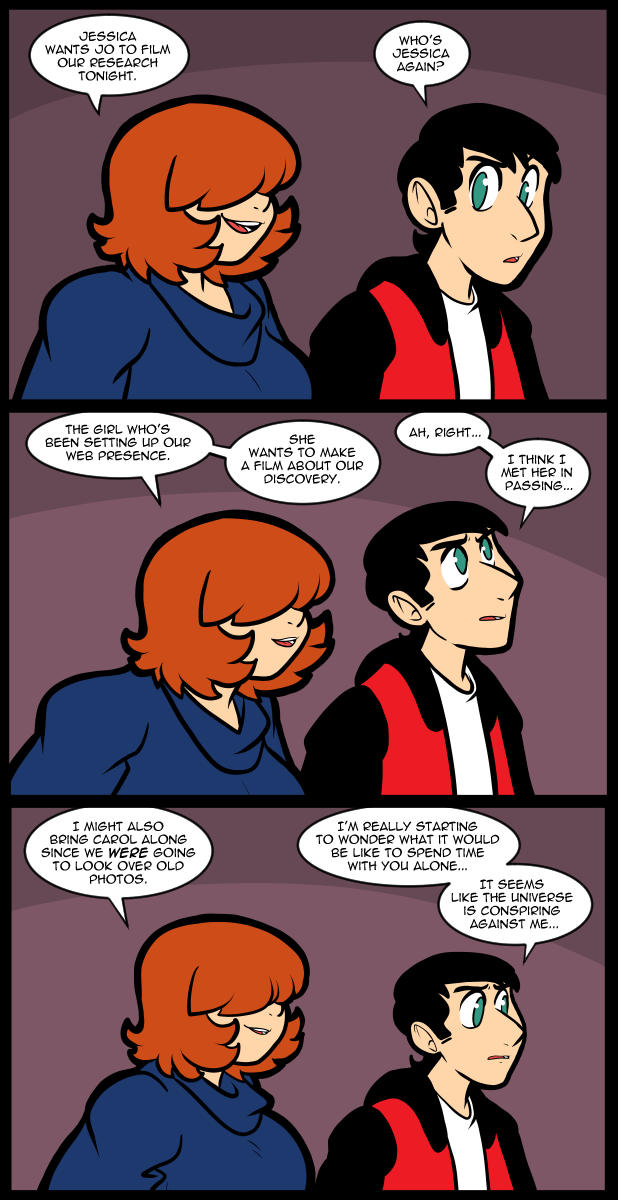 Okay, since I had a typo on the previous page I’m gonna take time to remind everyone of my protocols regarding telling me you’ve spotted an error. It’s been a while since I’ve gone over this so people seem to have forgotten. A lot of people seem to think it will make me angry. It won’t. What makes me angry is when someone, instead of just pointing out a mistake, gets cute about it. Don’t play word games, don’t try to show me how smart you are, just tell me what the mistake is. Panel one, bubble two, (add appropriate error). On March 20th of this year I will have been doing this for 15 YEARS. The song and dance about typos, or misspellings, or whatever is so fucking old to me all I want is just to be told straight out, what the issue is, so I can fix it. For me, when someone gets cute about a mistake it’s the equivalent of someone saying “Well it must be free!” when something won’t ring up at a checkout. It was arguably funny ONE TIME. Every time after that gets progressively more exasperating.

Most of the time I don’t mention anything because when the first person points out a mistake the next one checks the comments to see if someone else has already corrected me. I don’t know what it was about dissuade, but I got more messages than any other mistake I’ve ever made. For a couple of people it seemed like it was more of an excuse to message me. Like, if you want to talk to me you can message me at any time. I will respond to you on whatever platform you want to talk to me on. There’s no need to wait for an excuse. Although I really hate facebook’s user interface. I will respond if I notice it but it’s such a mess it can be months before I notice a ping in the giant pile of pings Facebook is perpetually sending me for no good reason. The site’s email address sometimes flags random messages as spam, so I may not see it until I check the folder. The fastest way to get a response from me is Twitter, but with all the bullshit going on with them I totally understand if you don’t want to use their service. I’m on Instagram, but I’m not super familiar with it, so I don’t always notice the notifications, but I eventually think of it ad check. betweenfailures is the username. I don’t know how you search it there, but if you use instagram you probably do.

At some point I’ll log into my minds account again, but the last time I used it the site was just super shitty & pointless because no one who reads my stuff was on there. Now that there’s been an exodus from twitter it will actually be worth the effort of recovering my login data. I created the account originally because I thought that twitter had too much power in the social media sphere, but it was really convenient not having to use other platforms… I guess that’s coming to an end now that people are finally getting wary of the tech monopolies that are dominating everything. Which I would like to point out I was warning everyone about YEARS ago, but no one paid attention to my ramblings. So I think I should be allowed to indulge in a light “I told you so” as a treat.

This post is kind of superfluous, because the people who read the blog posts probably already know my stance on corrections, & the ones who don’t won’t see it anyway… I dunno. I’m just stressed about everything in general, so I took the time to make a cranky post regardless of if it actually has any measurable effect.

Hey, sometimes you just need to write out your complaints even if you think it won’t matter. Getting it out of your system is always helpful.

Wow.
Yeah. Obvious jokes, at work, can really be a pain.

I used to work at a Toys R US store.
The action figure aisle was named, 2b.

Tell the customers where the action figures’ aisle is,…
AND you get to hear the joke that goes: “…to be, or not to be, that is the question…”
UGH.
I probably heard that thing, daily.

I think Reggie is seeing something, like some people see, in Monarch of the Glen- some [potential?] girlfriends, + boyfriends, don’t get a lot of alone time. I guess.

Too much time together breeds all SORTS of problems. Errrr, problems of all sorts?

MMmmm Allsorts – Those are those British licorice candies that most people hate for some odd reason.

Nah, I like the peppermint and the licorice allsorts, it’s the ginger flavor that they mucked up.

Perfectly reasonable rant, Jackie, and I always read your posts.

I’ve been cleaning up copy most of my working life. Most typos come from fumblefingering, not from ignorance. True, some people can’t spell, but that doesn’t mean they’re stupid. I can’t draw, for example. Different skills. Intelligence is not all one thing.

Replying cause autofill did not complete my username. Another source of typos. :D

No, Jackie, I think you’re allowed a GREAT BIG “I told you so!”

We may not be far enough along to really define a full cycle but I expect that there will be PhD dissertations on the life cycles of Tech Monopolies. It’s not so long back that Ebay was “America’s Yard Sale”. I expect that it won’t be too many years before Facebook morphs into something else. My feed at least has reached the point of being about 25% advertisements and political clickbait. Perhaps Jackie just sees a little farther into the future of our monolithic media masters.

Same is happening to my Google searches. Lots of ads only tangentially related to what I’m looking for. Sometimes I want to know what a word or phrase means and all I get are ads for things that have used it as abtrademark and have nothing to do with it.
duckduckgo is better, mainly because I get only one actual ad, but I still get web pages selling those trademarked items.

Well Reggie, you’re a character in a comic. So the universe is either conspiring against you, or with you.

Well you’ve got nothing to worry about from me. I do math. I’m barely able to spell.

…and I’m a pedantic grammar nazi. I don’t do math. Between the two of us, we make one capable person. :)

I do do math, and I can spell. But I make lots of typos, and can’t proofread relisbly.

And that contained an actual typo.

I rely on spill chickens …… see? That’s what I have to put up with.
Also insomnia and working from home – ugh.

People are dumb but in various ways and technology leverages both the smart and the dumb in even more creative ways.

I’ve heard insomnia is worse in the time of covid.