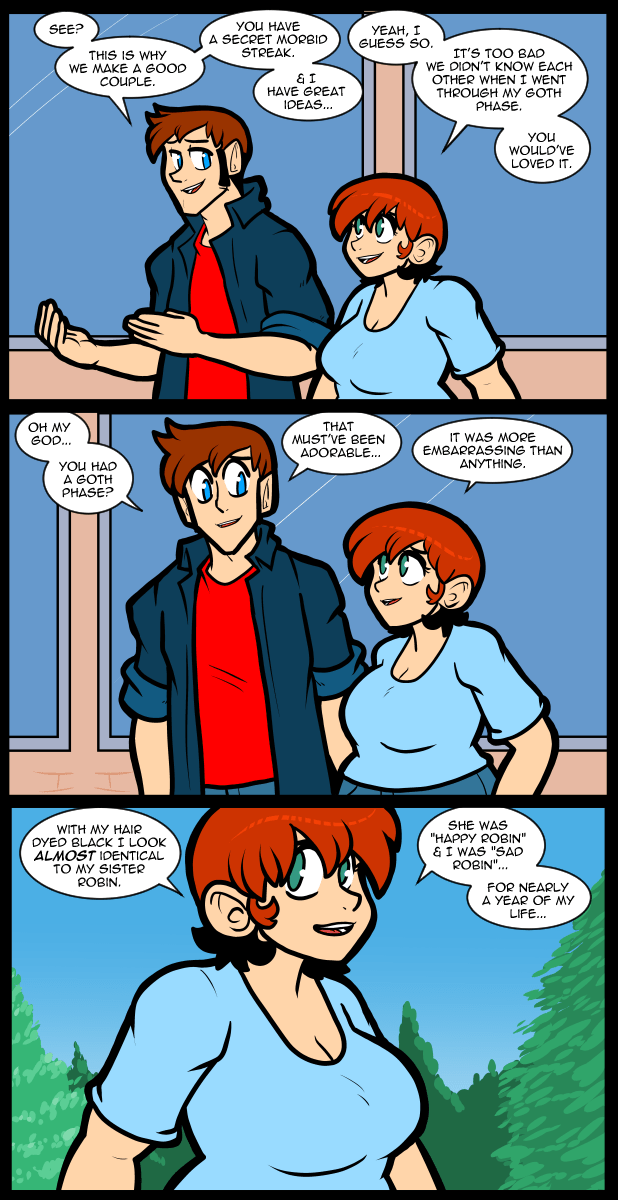 It’s sometimes difficult to tell the difference between a goth phase & clinical depression. I think you have to go by how performative it seems…

I think I could make that happen.

Jackie’s comments on acting goth remind me of a, now very ominous, comment about Kurt Cobain.

The reporter said something like: ” Is there something bothering Kurt Cobain, of Nirvana?
He’s the best at doing Punk rock, but he seems totally [miserable] about it.”

Not to derail from Kurt completely but..I felt like that when I watched Anthony Bourdain in his last show. I watched him growing up, full of spunk and sour in his shows on Food Network and Travel Channel, but lost touch when I went off to college. Later, after graduation, I watched his new show..saw the one where he was in Antarctica, he felt so awkward, so unlike the man full of sass from before. There’s a difference between calming down over the years and losing something else, it seemed like confidence at the the time. In hindsight (heh..) its that shaky kind of persona you put on when you’re not up for it, but the show must go on. I like to think he really tried, and lost that particular battle with depression that time.

Mental health is no joke, and the only highlight of this year has been that some of those around me have gained a better appreciation for maintaining mental health than before.

Kurt Cobain wrote a song titled “I hate myself and I want to die”, really no one should have been surprised when he killed himself.

John Lennon sang, “I am the egg man”, and “I am the walrus”.
What do those words say about John’s personal life?

I second the request for a goth Carol picture; I’m dying to know what that what that would look like!

so was she the twisted sister? (thank you I will be here all week. )

Any time a character is shown in a different manner is interesting on many levels, from story telling, to style, to even subtle metaphor. Another thing it prompts is a comparison to how the character is now. This brings up a question.

One of BF’s more unique aspects is its diverse character set, just look at its title bar. A recent artistic shift has been a general plumping up of several characters, even the “thin” ones. All except Carol. She has had what could be called a deflation phase.

This is not a call for more consistency in the art, but rather an alert that physical ques are not only good story-telling devices, but they also help embody the more difficult to express or intangible traits of a character. In Carol’s case she has a mother hen aspect that would more difficult to capture without using a Rubenesque but overtly busty shape, red cockscomb hair, or her consistently wing bent stance. Other BF characters also animalistic references.

It could be said that the strip could be expressed by animals alone:
The common dog is the lead character Thomas
We have Carol as a hen
Jo as a mongoose or racoon
Nina as a giraffe
Reggie as a snake
etc.

In fact just by saying an animal, one could guess the character…
The Bear
The Cat
The Mouse

Others have a less direct associations but…
It could be argued that Ed and Jessica are a crow and raven respectively. Both black birds with intelligence and similar but slightly different life approaches due to size.

Anyway – keep Carol zaftig but busty, otherwise she starts to read like any of the other 3 or 4 simply plump women of the strip. She is hourglass not apple.

There’s a collision of two motifs for me: Like Thomas I think womens’ goth phases are attractive. But I’m also a redhead with a penchant for redheads.

preformative definitely. Clinical depression, from what i have seen doesn’t make an effort, or have the energy for the amount of makeup and shopping to do the goth look

From my own experience, clinical depression had a lot of going thru the motions of daily life (work, eat, sleep). I just wore what I had, so no all-black ensembles. I suppose if one had that before an episode, you could do it, tho you might be mistaken as emo. (Btw, I love your “Hitchhiker’s Guide” name.)