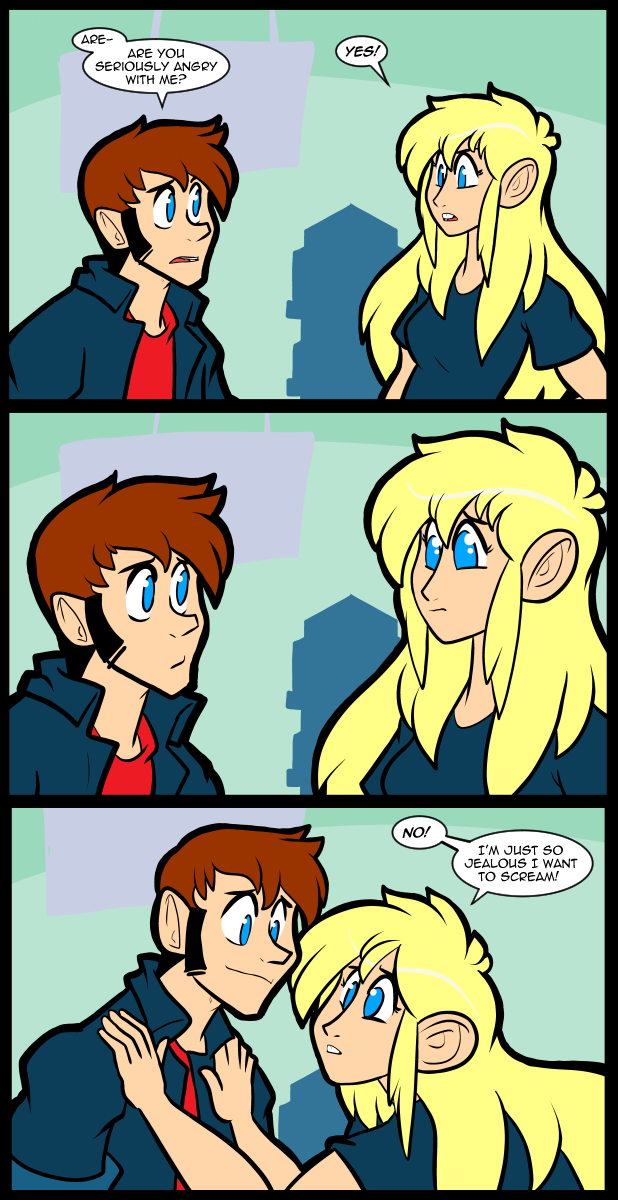 I had a hard time landing on Nina’s expressions because she’s fucking with Thomas, but also actually disappointed about missing out. I kind of just went with what felt okay, even though I wasn’t totally sold on what I did. She looked too angry in the last panel, then too sad, now, kind of sad enough, but maybe faking it? You can be genuinely angry but still joke because you know you’re wrong. I mean, the phrase “truth in jest” doesn’t exist for no reason. In any case I just decided on something because I had to & I was off my game all day anyway, so it wasn’t going to suddenly get better.

I mean, she’s sort of serious about the whole thing. If he had called he she would’ve raced down to see the events unfold.

Awww. She autowins with puppy eyes!

If those eyes were any bigger Nina would be a anime character, or maybe Disney.

She does remind me of Gadget Hackwrench.

Nina strikes me as the type who won’t get legitimately angry with Thomas, or anyone for that matter, unless the situation was VERY severe. If I remember correctly, I think the only time Nina was legit angry in the comic was with that one girl (I forgot her name) who broke Thomas because she became a successful author. Although I think it was a Stephanie Meyers situation in that her books somehow sold really well, but her writing skill was clearly terrible.

I just reread that sequence, and the caliber of the writing wasn’t addressed. Thomas got Jess to flex her influence to bring a ton of buyers into the store to make the signing successful.

Nina had read the book. Thomas asked her if it was any good, and she said it wasn’t terrible, she had seen much worse from authors on their first try. That’s as far as we got on the book itself.

If you want a real incidence of Nina being legit angry, It would have to be the time she slapped Reggie.

Slapped him, and then provided first aid for his bloody nose. Kind of like the police marksman who shot someone threatening someone with a gun, then as a part time paramedic provided first aid for the man he just shot. Let me be clear, I support both. Once an offense or a threat has been dealt with, it’s time to be civilized (if that term has any meaning anymore…) once more.

This is how I imagine friends to act. I believe I also used to act this way with my friends

I really love the close not-romance between these two. I also just love Nina to death.

It’s always good when two people cross that barrier and their friendship becomes something stronger than a normal relationship would have been. You can see these two have a level of trust that’s only able to be built over a very long time. And it’s how they probably could never stay angry at each other.

Also, I am all for Nina anime eyes on occasion.

Wow. Joyce Brown has some competition all of a sudden!

Super jealous. And probably a little angry, but only a little, mostly because of the jealous.

I think we’ve all been there at some point.

I don’t think you could have nailed the puppy eyes on both of them any better, Jackie; I can’t look at that frame without laughing.

As much as I enjoy Nina’s character I would bet that her presence would have only muddled the last story arc. I wouldn’t be surprised to find that someone has deduced a rule of thumb for the ideal number of characters for any given situation in a story.

ah you nailed it, couple with the dialogue it works very well. I could see the quandary though, so many ways to go with it, plus in the next panel is when you can follow through with her making it more clear shes intentionally screwing with Thomas

If she were truly angry, she wouldn’t have bent over in the last panel and put herself in the subordinate position. Body language (and tone of voice) is everything when screwing with a friend. ;)

Man that beat frame was just everything.