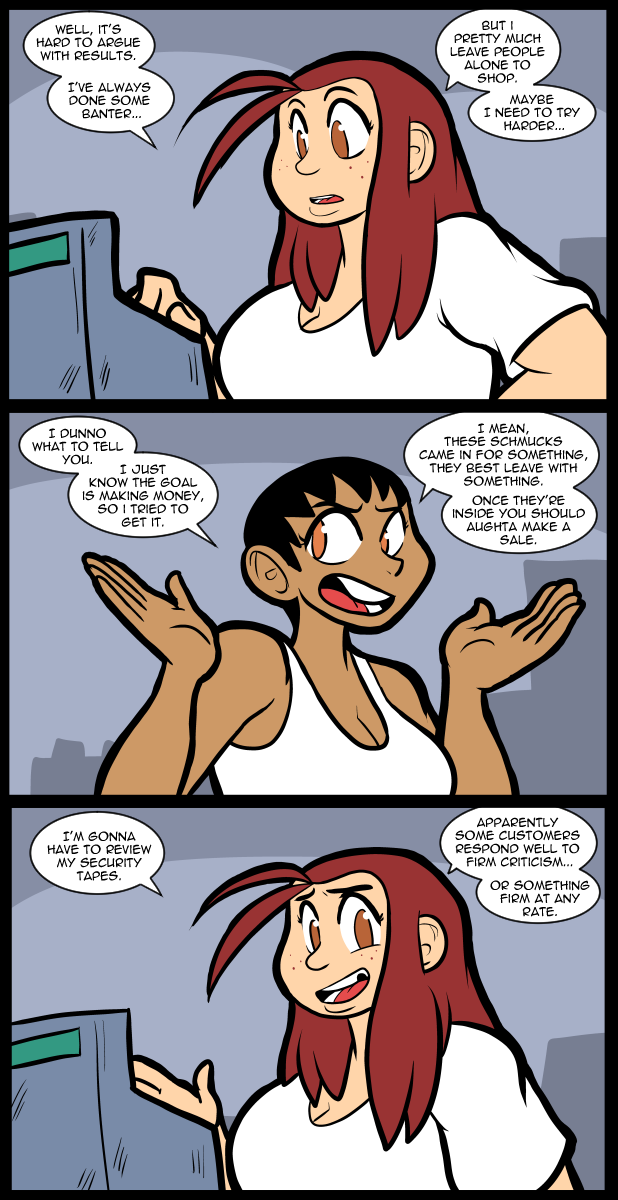 This was posted a little late because I fell asleep.

honestly its a supriseingly common sales tactic
its like when you are at a super expensive store (lets say a fancy china store ( the plates i mean)) and the sales person acts like you are to poor to buy stuff there
alot of peoples first responce will be: ILL BUY THE MOST EXPENSIVE THING JUST TO SHOW HIM I CAN (wich when you think about it is stupid but hey it worked)

I’m a restless sleeper, my Mate is a knitter, sleeps like a corpse. Maybe the “knitting up the raveled sleeve of care“ thing works.
Any what, I hope you get to sleep some today.
Sales is weird stuff, I don’t get it. Other’s do. Glad I’m not in sales.

Many of your customers probably react well to an attractive woman paying attention to them – shocking, I know.

I can’t find it in archives, but Rulette did say she does try to converse with the guys who show all the symptoms of not knowing how to talk to women.

Evrina does the same thing, but in her own manner.

‘Should aughta’ bugs me… the spelling is fine, accents are good; it’s the wording, it just sounds wrong in my head and I’m not entirely clear on why.

Spelling isn’t completely fine, actually. “Aughta” should really be “Oughta”, as it’s an informal contraction of “ought to”, in the same way as “Wanna?” is a contraction of “Want to?”, or “Dunno” means “Don’t know”.

But I agree with the rest of your point. It sounds awkward. Either one (should or oughta) would work fine on its own, so doubling them up doesn’t really work. (Unless it’s some regional slang which I’ve never heard before.)

I just felt I should aughta let you know I hate both of your displays of pedantry. ;)

This guy gets it.

Especially since it shoulda been “shoulda aughta” ;)

Meh, you call it pedantry, I call it clarity. Spelling has rules, and words mean things. (Which is something I think we should all bear in mind these days.) If I was truly being a pedant then I’d have insisted on the formal spelling “ought to”, but obviously that wouldn’t work at all in this informal dialogue.

Another thing to bear in mind is that there might be a few readers who don’t have English as their first language, and this kind of “creative spelling” can cause a lot of confusion. I live in a place where less than 10% of the population have English as their mother tongue, and only about 40% consider themselves bilingual, so I’m reminded of this almost daily. (Or rather, I did in the before times. Nowadays not so much, because pandemic.)

I mean, have you ever spoken with someone so noticeably uneducated (whether because they’re that dumb, or because they just give no craps) that you can practically hear them misspelling the words they say in their heads? If a character is using a colloquialism, is this blatantly “gives no craps,” and/or it’s not something that happens often enough to impede one’s ability to read a work, then personally I see no problem with some words being spelled the way the one speaking would spell it, even if that spelling is technically incorrect.

Frankly, I sometimes try to speak with obvious misspellings because I find it funny, if I’m attempting to make a point, or if I’m playing a character for whom it seems appropriate. Sadly, not everyone is able to notice, since I speak with sound instead of speech bubbles, but those who get it feel the full impact and that’s all that matters in the end, it’s a private joke for anyone who is capable of getting it.

its quite ignorant and arrogant of you to assume that because someone speaks with an accent or terrible pronunciation that they are stupid or uneducated.

Frankly on most IQ tests ill wipe the floor with anyone on this thread. (statistically likely) And I know at least one guy from Huntsville that (lord help us all) will wipe the floor with every one you or I know cause he sounds like he biggest redneck in the history of rednecks but is working on Albecurie drive physics. (and if he ever gets one built.. will probably paint it Chevy big block Orange or possibly Roll Tide Red (with a UofA flag) cause he really is a giant goober, redneck with a 170 IQ. DOC Taylor is an INTERESTING guy.

My family’s from Huntsville. My two late uncles worked in sales in the steel industry and as a lawyer, respectively (in order of age), and my still-living uncle opened a genetics research firm that contributed to the Human Genome Project and even still has a research institute he helped found that’s named after him, the HudsonAlpha Institute.

And yes, they all had/have obvious southern accents, though not what you’d really call “redneck” accents. My dad, the youngest of the four of them, doesn’t normally have the accent because he lived in Iowa for years, then Atlanta and now New York, but the old accent makes a return when we’re visiting our Huntsville family.

I meant that while the spelling isn’t technically correct, that wasn’t the point that bugged me. It’s fine.

It’s a Kansas thing. I actually say it all the time. I went with a phonetic spelling to get across how it actually sounds as she says it.

While it irked me a bit when I first read it, I kind of figured it was something people do say somewhere. I think a lot of people fail to realise how many localised forms of speech there are in the U.S.

All of a sudden, I wanna hear the song:

thats more of pashtiche of upstate and western New York, parts of New england. Most pronounced in the dialect known as Mainer.

at least its not Bawlmerese (my more comfortable accent) where we say things like Wudder and ambilance and have words like downeowshun.

Wow, Thanks. :)
I really love hearing about accents, + types of slang.

Is Bawlmerese a [dialect type thing?] from Baltimore, MD?

Is “downeowshun” a way of saying- down by the ocean?
I’m just curious. *does shrugs*

Its because should and ought have the same meaning.

Sounds to me like the sort of thing someone would say, and the meaning is clear. “Should aughta” seems to flow better than “shoulda oughta” to me, and localisms like that usually develop because they flow off the tongue.

Grammatically, it’s a redundancy. They are a very common form; “close proximity”, for example, or “few in number”. Evrina could say “should” or “oughta (ought to)” and either would have the same meaning. The two terms together act as emphasisers.