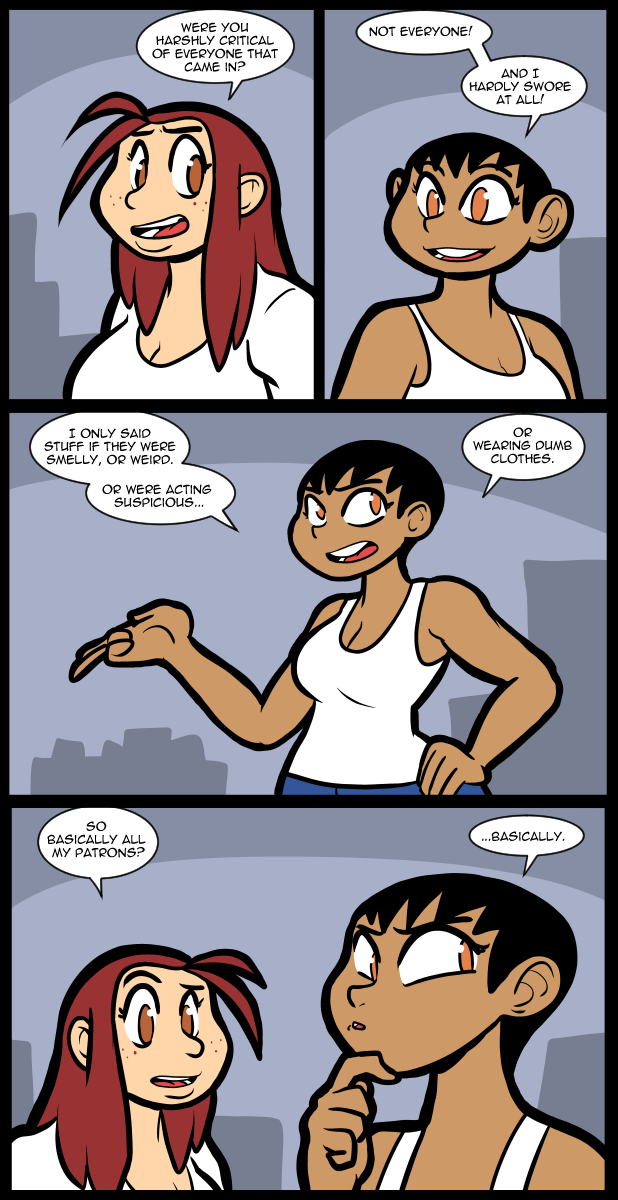 It was kind of amusing to see the comments about the business end of Rulette’s shop. Like, the cost of living is lower in Kansas, I remember days in the old comic shop where $50 was the profit for the entire day & we were happy to get it. People find ways to get by. The actual comic day pretty much made the entire week & anything else was a bonus. That’s why there aren’t many comic shops left around in little towns. It’s tough to make the numbers. It was one thing in the 90s when people were nuts for comics, trying to make millions reselling them. Now, you’re just selling comics on the side while really being the place where people get adult children’s toys and funko pops. At least that’s my understanding. I haven’t seen a comic shop in the wild in almost 20 years. This is just me going on what I’ve read.

There was a comic shop near where I used to live in Waltham, MA that was an OG comic shop. It was one of the first cool little brick and mortar places I encountered when I moved there 9 years ago, and was a proper shop dedicated to comics and comic-adjacent collectibles. Having said that, walking around in there definitely gave the impression that it was a more of a “hill to die on” than a viable long-term business model…

There’s a shop close to me called Parker Banner Kent & Wayne that’s still active. 1/4 of the building is comics, 1/4 is board and trading card games, and the rest is an open area for organizing games to play with other people. It’s really nice! I haven’t been in a while though, for obvious reasons

Since I started on my nerd Journey 20 years ago. There is only one shop that has lasted for those 20 years. And I can only think of only three that are actually comic shops. Most are just games.

I frequent a comic shop, it’s MOSTLY comics and board games. But yea, most the shops are funko pops and toys any more. One shop i go to is my D&D supply shop, the other is comics.

Most of the comic and game shops I frequented back in the day are long gone.
Only one was left but they had three stores and an online presence. I have no idea what Covid has done to them.
I remember the main store changing with the times from purely comics on both floors, too wall to wall RPGs on the second, then making way for Amime and ephemera, and now packed solid with pops and just a corner relegated to everything else.

Gameways Ark was Legendary.
Situated in a Victorian Mansion on the main strip.
Main floor toys, puzzles and games for the normies.
Basement was models of every types with imports that would melt credit cards.
First floor was games of every sort and variety.
Walls of Roleplay game books from every publisher in print, Wargames from pocket skirmishes to 50 pound monsters, classic toy soldier miniatures, fantasy and scifi lead and much more.
Second floor was the games room for various events and the SCA meetings.
Nobody talked about the attic.

Maybe it was my pride that kept me from asking, days ago, but please tell me-
What is Trollsauce a euphemism for?
I really don’t know.

It’s not a euphemism, just a thinly veiled reference to Homestuck

my go to comic shop also sells board games, magic the gathering, D&D, as well as the funko pops

Maybe her patrons are into it.

I know of 4 comic shops within 40 miles of me (3 of which I’ve bought stuff from on multiple occasions) and while 2 of the 3 I’ve hit also carry games (both board & card) they’re all still primarily comics & the like.

I know one has gaming tables & held game nights when people could actually interact face to face, and I wouldn’t be terribly surprised if the 4th I’ve only seen in passing had similar (as the do advertise as comics & games, and are in a pretty prime location for their town)

Thinking on it, I also have no fewer than 4 retro video game shops in that same radius (and that’s not counting the collectibles reseller who technically has comics & games, but charges a premium for everything)

I can’t help but wonder which of those spots is going to still be there once everything opens up again (for real this time, really real, honest)

I’m in Lawrence right now, and se
we have had three or four different shops open and close in the past few years. Boom came over from Topeka and then died. AstroKitty got eaten by Game Nut. Hometown closed up, but I think that guy was kinda happy to be out of the biz.

most of the ones i’ve been in also devote a lot of space to collectible cards, and gaming miniatures

There were a couple that I know of around here. But I live in Michigan, which was pretty much “insane difficulty” for COVID thanks to our sociopathic governor, who apparently thought getting name recognition to be Joe Biden’s first mate on his cruise to the bottom was more important than, you know, her own state. So who KNOWS if they’re even open any more….

Evrina: Hey, I work with what you give me!

Like most that have commented I can back up the reliance on non-comic media. My hometown had three comic shops when I left for the capital. They were all diversified to various extents on comics, tabletops, rpgs, figures, cards, etc. I think basically all of them thrived off of MtG, given that they’d regularly hold small tournaments and such.

I don’t really know all too much though, as they were never my scene. By the time I knew of their existence, Pokemon cards were out of style, so I really only ever went into them to expand my dice collection for D&D.

You fucking mad lad, you deserve a statue in your honor

Thank you for not being an annoying pòkemon car collector

P.S. I understand that there are great people that collect pòkemon cards, but the majority I meet are the ones that look down on you if you don’t know what a certain pòkemon is

Really? That’s unfortunate. Feel bad for everyone who had to interact with them. Though I guess of course I wouldn’t know that, I’ve never met another pokemon card collector XD

Though, now I wonder what all the clerks were thinking when I asked to see which pokemon cards were in stock. I was mostly after the Neo sets from Johto era, but they basically never made it to the stores back home. So I ended up standing off to the side for 15 minutes flipping through the pages and then bought nothing.

I used to collect them

Unrelated to the page, but I just took note of the timestamp on my previous post.
Anyone else have the site displaying timestamps in Maldives time? I’m posting this at 11:52 in my local time (mountain daylight)

That’s what the original server was set to many moons ago and it transferred over to the new one. It’s like that for everyone.

When I was in High School (Oh so many moons ago). There was a comic shop in St. Louis call Rivendell (like unto Tolkien). Great place.. And when I moved to Olrlando, I used to frequent 1701 Mills Ave. (Not only the address but the store was a tribute to USS Enterprise 1701).

I think I’ve said it before but I’ll say it again. THIS is my absolute favorite webcomic EVER

P.S. we need to vote desperately on topwebcomics.com

I keep forgetting to change the incentive image.

There’s actually a successful comics shop near me called “Things From Another World”, and like you describe, comics are probably the smallest of its inventory. Mainly it sells collectibles, toys, model kits, and tabletop stuff, with a wall rack of comics in the back.

There is a wild comic shop in KCMO near a major shopping center that you might be familiar with Jackie. The closest name I can think of for it is Zone-Red. If there are any other “kc-kids” here you all might be able to figure it out.

I don’t remember if it was ever said, whether by me or someone else, but Evrina reminds me of a rat for some reason.

I have a vague memory of, either here, or on some other site, that- (Ms.) Alex, + Evrina, were characters in a side-comic of Jackie’s.

If they’re wearing ‘ahegao face’ clothes, the mockery is deserved.

Oh, now I can’t unsee that…