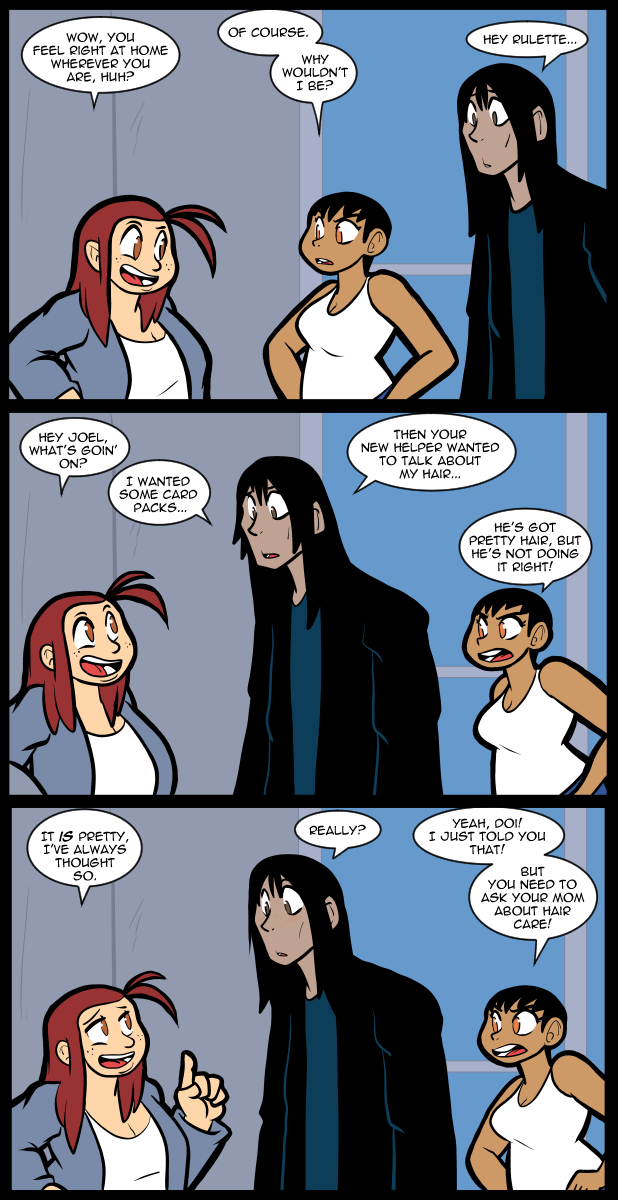 People will tell you what’s on the outside doesn’t matter, it’s what’s inside that counts. That’s bullshit. What’s outside gets you the interview. After that you can pretty much do whatever because humans are stupid & get attached even if you’re a piece of shit. The instinctual desire for an attractive mate will override a lot too. Just doesn’t look like shit or smell like it & you’re most of the way there. Unless you’re ugly. If you’re just ugly you’re fucked.

People are prejudiced and always will be. I’ve already given up on trying to argue against that status quo years ago.

“What’s outside gets you the interview” I love it and will quote it much. There’s a Something Positive comic from forever ago that makes this same point, now I’m gonna waste like 45 mins trying to find it.

Also Hair based comics seem to be the thing, here, QC, and S*P all hair related tonight

Is today some day or another I’m not aware of? Cancer patient awareness or something?

I thought if you’re ugly you *don’t* get fucked?
Evrina gets her own Gordon Ramsay-esque makeover show? Queer Eye, only mean? Hmmm

The Leer eye for the frumpy guy

I personally do not have an issue with the way people look as I seldom deal with people on that level. However having said that some people have stated a sense of shock when Julia Roberts married Lyle Lovett. Again I just assumed he saw something in her that the rest of us did not or something like that.

She’s wrecked every movie I’ve seen her in. :)

Not as badly as Jessica Alba, though I think Alba’s easier on the eyes.

If you’re highly competent, or powerful, it’s OK to be ugly

You can also be rich.

Sadly competence gets overlooked when pretty and rich is in the house.
Rich and powerful is usually inherited so they can get away with ugly and incompetence.

Unfortunately, Elvira’s advice is terrible if his mom has short, bleached hair and uses a blowdryer or a hair straightener. Like so many women do.

Maintaining long hair and keeping it healthy requires a different type of care.

(Source: Have hair past my hips.)

Hey I used to (sob. SOB!) I , I used to have hair. (Sob, followed by anguished wail! Followed by collapse into puddle of tears).

Oh shoot, I didn’t mean to traumatize anyone. (Hands you a kleenex box, a spoon, and a big bowl of chocolate ice cream.) You can always grow it back! I have faith in you! :)

Yeah… Not so much, Really.

Sounds like your hair was lovely.
I recently saw an old passport picture of myself from decades ago and was impressed how gorgeous my long hair used to be. But now I’m going bald and merely have a long beard.
I’m a 73-year old man now, who walks with a cane and sometimes a walker.

Taking care of yourself, doesn’t always get the interview.

That said, I don’t think he needs to talk to his mother. Taking care of one’s hair is pretty damn easy. Shampoo. Conditioner. Brush/Comb.

Yeah and little hair care and better posture. Granted, there is always the extreme that requires a different set of tactics but for the most part, it is 90% presentation. In my youth I tended to rebel against expectation but I learned that you can manipulate the room by playing to their expectations. My experience with folks like tall, dark and greasy is the difficult part is getting them to take a step outside of the familiar rut they are in.

And clothes that fit.

I prefer a loose-fit clothing for comfort. Someone else might not.

Apparently, according to a “Fashion Tips for Men” article I read this year, the current standard for jeans is to try on jeans until you find your comfort level, then drop back two sizes.

That’s some prime Bullshit, right there.

Fit is different styles. There’s fit to where it should conform to your body but it shouldn’t feel snug. Actual nice clothes should feel comfortable anyway, so upping sizes shouldn’t be necessary (unless you are going for an oversized look). It tends to objectively look a lot better when clothes are not too tight, and not too loose. There’s loose, then there’s baggy. Not a good look when you don’t fill it out a little.

My experience with male friends is that finding shirts when you’ve got a long torso and broad shoulders is akin to finding the holy grail. Moreso if you’ve got big muscles too, so much so that there’s boutiques that cater exclusively to those body types. Shopping for clothes sucks whenever you step outside for narrow paradigm of average sized, girls and guys. I find sticking to a brand once you find one that fits is worth it.

Tailored and/or adjusted clothes are such a joy to wear, though. And sometimes they aren’t that much more expensive. You are comfy and you look good. It can do wonder for self-esteem. And since good self-esteem is noticeable, you get better results in social interactions.

Tailored are probably a lot more expensive than the $1 or $2 ones I get at garage sales or thrift stores. Never have much luck with thrift store shirts though- always end up being a boy’s large or a women’s. At work, our shirt supplier is so bad, I have to order a large tall so the cuffs are big enough, and shirt tail is long enough- and I’m 5’7″ and so the shirt itself fits like a tent.

Of course, I’m a fine one to talk about fashion. The only time I wear anything other than jeans is a funeral or a wedding. Work wear was jeans and a polo shirt. My jeans are purchased from a bin marked with my size and I’ve purchased the same shoe model every six months or so for the last 10 years. I still have fun with shirts but I can slip into gray man mode without even trying.

First impressions are important, and it is always with your eyes that you usually make first contact with someone (hence those dating shows where they have the contestants behind a wall etc.)

Being true to yourself is more important, but knowing when and where to shape your exterior to fit can definitely ease your passage.

I worked as a tour driver for years, and i made the effort to dress a particular manner, and use mouth wash, when i was on the job. And people related to me better for it. Regularly made more tips than other drivers (also helped that i drove better too -sandrail dune tours)

I’ve seen numerous people who are so devoted to their identity and individualism that they can’t get or keep jobs because they are unwilling to change clothes, or cut hair to fit the environment.

It’s a stupid thing really. Because clothes and material things do not define your character, morality, or ability. But there are many who believe they do.

Unfortunately, yes, looks do matter. But looks don’t matter in the sense that you have to look like a supermodel. Average is actually attractive to most people, because it’s familiar. Psychologically, humans trust what they know, and therefore are attracted to it. That’s why you often trust people more easily if you subconsciously recognize that they look like you, feature wise. If you’re “ugly” you’re probably actually just average, in which case all you really need to do is be clean and reasonably well groomed and you’re golden.

Honestly, your default appearance matters less than how you manage your image. For example, most women who wear makeup will wear more toned down makeup, just basic brown eyeshadow and neutral nude lipstick, when going to their office job or an interview. Whereas those same women might put on something more extravagant for a night out, glitter, bright colours, etc. Whether or not those women are considered to be attractive by societal standards is often less important than whether or not they present themselves appropriately in the situational context. There are plenty of average or even below average looking people who learn to rock what they have and find success with it.

TL;DR: Looks do matter, but you are not actually screwed if you’re “ugly”, and honestly, you’re probably not even ugly.

Is NOBODY going to mention that we finally have a name for Snapeman?

Here I thought we finally knew. :/

Really doesn’t help if you’re ugly, and your only interaction with a female is to say,” Special. Tea, unsweet, in a to go cup.”

Now we know where Keanu Reeves goes, on his days off. ;D

“There are no ugly women, only lazy ones.”
-Helena Rubinstein

I’d say it applies to men as well.

I have a love/hate relationship with Ervina. She’s both cool, abrasive, rude, and caring (pick two of the above). The stuff that comes out of her mouth! And it is almost always Just the truth. She’s such a great character, … but sometimes I just want her to Shut Up! Usually cause it hits home.

about 4 yr.s ago, I saw part of a concert, on TV, starring Bette Midler.
I’m guessing that the average magazines don’t show people with [Bette’s] looks as “the pretty people”, or even “the super pretty people”, in their magazines.

But- in her doing that show, to me- Bette’s singing, + her actions, made her look like one of the Sexy-ist people, and most caring of people.

I think that a person’s actions + behaviors, can make them the most attractive people ever.

Well, one thing about visual entertainment – they show all types. That’s the ONLY plausible explanation of why Steve Buscemi is still in movies (that, and he’s actually a decent actor).