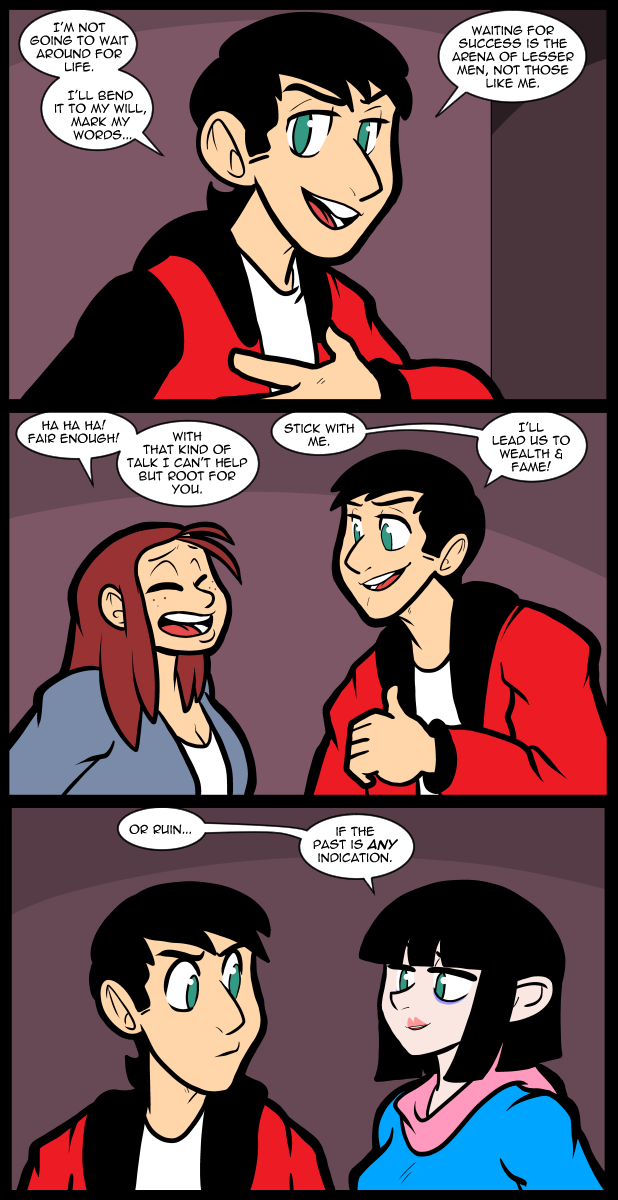 A little sibling ribbing to maintain perspective. Gotta keep those brothers humble… Although I think Victoria actually has a lot more faith in her brother than she would ever admit. For her part Patty enjoys a blowhard. It’s pretty obvious that she enjoys a wide variety of personalities, especially since hers is so forceful. If she were younger she’d probably go after Reggie without hesitation. He probably has a few traits that remind her of her dad, not to get too Freudian about things. The comic frames Reggie in a negative way for narrative purposes & plays with the idea of that framing, but in reality Reggie would get along just as well as anyone else. Possibly even better than most of the rest of the cast. People with more confidence than sense often rise to positions they aren’t equipped for at all. He’d fit right in up there, even without ever having any character growth.

Honestly, I don’t disagree with Reggie, in principle, either. Shaping the world to suit you is as valid a life choice as letting yourself be washed away by its currents. Maybe framing it as better isn’t strictly correct, but it’s not wrong, per se. Each person has to find their own way to cope with their time in the mortal realm. One way isn’t suitable for all people. At best you should try not to let your way infringe on the way of another person.

Of course, if your way is founded upon principles that require you to infringe on the rights of others that’s a whole other thing. You shouldn’t be surprised when you meet resistance at the very least.

I think that’s the brightest threads i’ve seen on Victoria there. Artistic variety or foreshadowing…

i’ve really been pleased with your progression with Reggie, very believable.

I’ve said it before and I’ll say it again. Reggie is the best character on between failures. He’s had the most growth and he’s also the most flawed. You can’t help but root for him.

so hes the vegeta of the story.

If there’s one thing I’ve learned in life is that if you want something you have to work hard and earn it. Reggie doesn’t strike me as the type of person who will do that.

I’d argue that Reggie definitely tries to earn what he wants through hard work. However we’ve seen multiple times that he is clumsy and abrasive, leading to mistakes and misunderstandings that end up holding him back. If Reggie wasn’t completely arrogant and egotistical, he might have advanced more quickly at the store or hell, even been able to stay with his dad’s company.

Success comes to those who take.

You TAKE what you EARN, period!

Don’t cock-block your brother, Vicky. (Not that you’re wrong, but that’s beside the point.)

Now that’s the Reggie we all know and love. There’s some style to being able to say lines like that and keep a straight face.

Believe you’re referring to the Peter Principle. People rise to the level of their incompetence-and then -I guess..tenure.

I would posit Re-election or lateral transfer to a similar position.
Just look at the golden-parachute club and will see a very short list of CEOs et al in their positions for a lifetime. Yet the list of firms each has in turn captained is longer than anyone could get away with and still find gainful employment. Funny that.

I hate confident people that rise to positions they aren’t qualified for. They are the absolute fucking worst bosses.

The very last boss I had before retirement was the worst boss of my working life. You perfectly described him with your first sentence. I actually retired several years earlier than I had originally planned due to him.

I remember a time when basically nobody liked Reggie, those days are so far gone now ^_^;;

Oh I wouldn’t say that, though the cheering squad is quite energetic.
More of a grudging respect for what few good points he does display and his growth as a person.
Mind you, I would still dislike the person if encountered in Real Life [tm].

Pretty much this. With the growth he’s had recently I think I’d get along with Reggie well enough (if people don’t have a problem with me, I usually don’t have one with them either), but I doubt we’d ever be friends.

Vicky, yay! Bringing her brother back down before he regresses into the dink he used to be.

By “that guy” do you mean the guy who didn’t understand that days have passed since then, so she is perfectly capable of being anywhere?

Whereas, it was phrased as a question, and not a phrase like- ha ha ha, the cartoonist messed up. You dig?
*shrugs*

I apologize for replying in such a mean way, but it is important to remember that I am the guy who writes Reggie, so sometimes you’ll get that energy.

I also apologize. I was feeling pretty thin-skinned, yesterday. I don’t usually talk to people, when I feel like that.

Long story- Why thin-skinned? Yesterday, my Dad wanted to go to a graduation party, + I was his only ride. He was driving me batty, asking me to help him set up that ride. [Relatives, aggh!] :D

It’s fine. I understand it- your stories have a lot of [rebels and rapier wit in them], so I’m going to see rapier-wit happen, when I’m here.
It goes with the territory-
I can’t hang out in the pirate bar, and not avoid the pirate songs. :D
Cheers, TRA

Damn, which bar has Pirate songs? Where do I go?

Singing;
I carry a sword,
I wear an eye patch, suspenders and a belt,
I vacation down on Majorca, but sometimes up on Sylt.

Chorus:
I sail a pirate ship and I’m okay,
I drink rum all night and I sleep all day.

I’m not sure.
There’s the Mutiny Pirate Bar (+ island grille), in Pasadena, MD.:

Jackie, it doesn’t matter if I like or dislike Reggie, he dovetails so well with the cast as a foil for Thomas and Tina. He’s kind of the anti-Tina, or negative Tina. His bitter attitude against her sweetness, … or maya be the anti-Jo? She is so shy and self deprecating and he is all bluster and brass?
I love them all. Even if I’d like to strangle Reggie, each and every appearance.