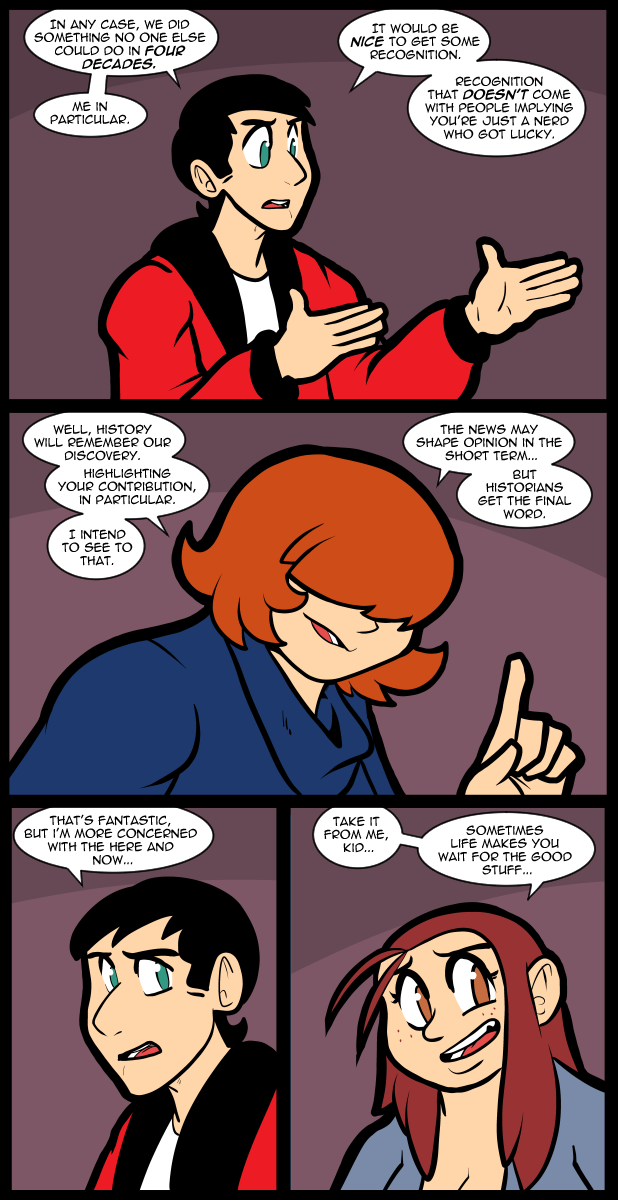 I empathize with Reggie in this situation because I know that the world at large would not care about what he managed to do, in spite of the fact that it is actually very impressive. The story itself, to the average person, would be a blip in their day. A factoid to share with coworkers or friends, minus much of the context & information. Having lived it the event seems much more important to him. Alex, in contrast, sees the world more as it is. So does Patricia. The world rarely stops to give you accolades. When it does it’s usually because there’s money to be made in the presentation. Award ceremonies are tangential to the actual goal of attention for an industry, or ad revenue. There are, however, enthusiasts that will be very interested in the history. Those are the ones who really want to dig down into a subject, or listen to hour long podcasts about whatever random thing it is you’ve done. The audience you should court.

History isn’t a fixed document, Alex. It’s a continuous process. So no, we historians do not get the final word, because some other historian will come along eventually and completely change people’s perception of you. And then again, and again, until the sources are eventually lost.

While a particular historian won’t necessarily have the final word, historians as a group still get the final word. And if no one ever revisits a topic, then the last published word stands.

Well, until it’s destroyed, and they’re all dead too, then the heat death of the universe gets the last word. But tHDotU probably won’t have much to say.

One way to be remembered,, said BF, is to:

This is a longer version of that quote, I think:

“If you would not be forgotten
As soon as you are dead and rotten,
Either write things worthy reading,
Or do things worth the writing.”

“Kid”? Um…I don’t think there’s THAT big an age difference, is there?

Yeah, it was established in Patricia’s first scene (looks like /comics1/1565-why-is-there-a-picture-of-a-burger-on-the-wall is the page) that she may look like 25 but is actually much older. However, on the page just before this one she said that Alex must have started at the school paper the year after she quit, which doesn’t really make much sense since Alex is in her early twenties; it’s been implied that Alex is at least a few years younger than her big sister Kia, who was the same age as Nina and Thomas, and they have been separately mentioned to be 26.

Highschool is 4 years in the US (I think, I’m not from there. Our HS is 5 years). If Alex joined the club her first school year, one year after Patricia left, then that’s 8 school years of difference. Which, depending on birth dates and cut-off dates for starting elementary school, can be either 8 or 9 years in age difference.

So it does work out.

But I don’t see a picture of a burger on the wall.

Just learned that the Black Plague came around in the 15th century,… well I knew THAT! What I didn’t know was that it came, and then came back, then popped up here and there, and eventually became so endemic that it was a just part of society. Just another pest, (yeah, I know) like scarlet fever, cholera, and the measles.
Historians; yay!

I hope we can do better than they did with this. I do not wish to become inured.

It is the old Frog in the pot that is slowly being brought to a boil.

Humans are like that in that they learn to ignore something that is constant in their environment even if it is detrimental to them – like living beside a highway or a abattoir – visitors will comment on “how the heck do you put up with this?” and you would reply “with what?”.

That black plague came back in India in the past few decades. It was a race to get enough of the right antibiotic there to stop it. And yes, we already did know what the right drug was and it did work.

My sister is an historian and a curator of a museum. She gets absolutely giddy telling people what happened at a particular point in the past but, (and I love this about her) she relates the stories without bias. She gives you the history but lets you colour* in the emotions yourself. She recently told me a story of a fellow who was trying to set in motion a genocide. She told the story and, gave it no moral judgement. She may have been telling me he was a fellow who collected stamps. *Canadian spelling
Cheers Ulrich

Pity the historians on the losing side. They aren’t just ignored, they’re assumed to be mistaken or lying-even when describing something the winning side mentions. You could study such, but I fear that way lies madness-or worse, a solitary sanity you’ll never be able to share. Where ignorance is bliss, tis folly to be wise. It’s a deep rabbit hole and a lot of things probably look a lot different from underneath. Oh, and,”Sandwich!”