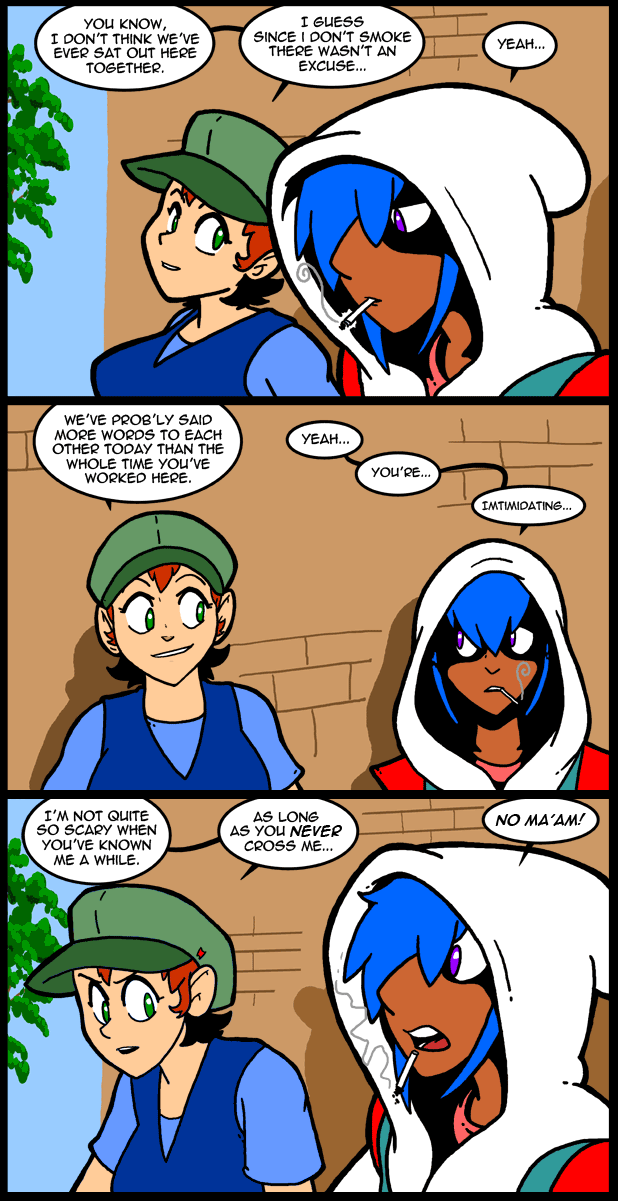 Before we get started with the story bit for tonight I’d like to trot out an idea I want to turn over to one of you. Some people have a hard time, understandably, keeping track of the minutia I pepper throughout the story that I callously expect them to tattoo on their minds. Perhaps one of you kind readers have time enough to go through the archives and construct a text primer that people can use to refresh their memories from time to time? Just thought I’d float that out and see if anyone bites.

Please contact me through betweenfailures(at)Hotmail(dot)com. Other forms of communication will just get lost. Also add me to your contacts so my replies don’t go in the junk bin.

“Hello Regalius.” (reh-gay-lee-us) Chirped Niona. His scowl had fallen on Julius and hardened considerably, but upon hearing Niona’s voice it melted away as if he’d never even laid eyes on him.

“Niona!” He exclaimed. “You beat us here. Even with your disability you manage to shame me again!”

“Disability?” Julius mumbled at her.

“He means my lineage” She snorted. “Backhanded is the only kind of compliment he’s familiar with.”

“It’s okay.” Niona smiled. “You’re so amazing you can be offensive without even trying.”

“My apologies…” He mumbled. “My tongue outpaces my head where you are concerned.”

“It kind of does that all the time actually, but you’re getting better at least.” She replied. “Fancy some lunch?”

“You are too kind.” He said, taking a seat in front of Dew Beam, apparently unaware that she was anything other than a tree. In his defense she had been doing little more than swaying in the sunlight for a while now and hadn’t taken any notice of him either.

“Make a fire, will you?” Niona asked Regalius, pointing at the pile of sticks Julius had tossed in the fire pit. He expected the dark elf to start fiddling with a tinderbox or something, but instead he readied his fiddle and rose from his seat. Regalius fixed a hawkish sneer to his face which he directed at the kindling and began to play. The tune was quick, syncopated, and Julius had to admit, reminded him of fire. A few seconds in the wood burst into flame so violently it made Julius jump and Dew Beam scream. The scream was so peircing and unexpected that Regalius nearly pitched into the fire in his mad scramble to escape it and observe the source.

Julius stayed where he was, confounded partially by being addressed at all and partly by being addressed as thief. Regalius, however was already starting his song of flame again, but with more intensity than the campfire had been portioned. Dew Beam was simply scooting gingerly away from the fire towards Niona, who was the only one unmoved by the ruckus. She picked up her spear, and casually gave Regalius a light jab to the stomach, one armed, with the blunt end. He crumpled like a blanket.

“She’s a friend, doofus.” She scolded, barely looking up from the frypan.

“Of course…” Coughed Regalius. “How… foolish of me… not to notice…. Even… the trees wish… nothing more… than to be near you…”

Julius had to admit, in spite of his irritating nature, Regalius’s overt devotion to Niona was kind of endearing. Against his better judgement he offered him a hand up.

“For future reference,” He instructed. “my name is Julius.”

“Of course, I’d forgotten.” Replied Regalius. “It was I who brokered your employment in our cause.”

It suddenly occurred to Julius that Regalius was likely the one who saddled him with the useless magical map. He considered letting him fall back down again, but his better nature won out.

Love today’s comic, as usual xD character interaction is hilarious. I am curious as to your proposition however. I am free from work this week, am rereading your series for the umpteenth time (it is honestly my favorite comic, web or otherwise), and have considerable skill with the English language. I would be very interested in helping. Do you have any specifications or layout preferences, providing I receive your blessing to go forth with the project?

I suspect that Carol’s ‘twin suns’ are what intimidates Jo the most.

They intimidate me the most.

Jo better not be the meat in that sandwich, otherwise she might not survive the experience

People can be intimidating just for being there, sometimes.
If that didn’t make sense, let me rephrase:
If you’re in a certain frame of mind, someone can be scary just by being there.

So, I can understand Jo’s plight. Especially since she’s already a social caterpillar.

My step-nephew and his wife were prison guards. I think she still is. If you just saw my step-nephew, he might look intimidating-6’2″ or taller and 200 plus, but if you know him, he’s not. His wife on the other hand, still scares me. Prison guards develop a bluff, and I know this, but I’m still not convinced hers is a bluff. She’s not particularly big or anything and has always been nice to me (once caught me before I would have gone over the edge while helping work on their roof) but still-scary.

Jo kinda reminds me of Raven with her hood up.

Wow, I think this is the second series I’ve marathoned through (QC being the first, which was maybe three sleepless nights ago) and now I have to deal with the feeling of ‘damn, I’ve made it to the end of this really dope ish in the span of hours where did my time go and have I eaten yet’ or something like that in shorter terms haha. Thanks for putting this out there man, I wonder where the ride will take me.

We’re all headin’ to Canada!

Huh… I’ve never been to Canada.

I’ve been to almost Canada. Does Montana count? A lot of the people there are like… idk.. half Canadian anyway? And my lady-friend is of French-Canuck descent, so in a way I’ve been in Canada.

Fun to know someone else marathons through webcomics when insomnia hits. I’ve done that with this series two or three times now.

Also, I’ve been to Canada before, which part are we headed to?

Keep up the great work on both storylines. Love where this is going on both fronts. As to the text story, I loled so hard I nearly woke up my mate when I read it. I have to second someone else’s comment, publish that bitch and I will buy it! I love your world setting for the text story, the Dryed and how different magics work… epic.

I still love how the smoke from Jo’s cigerette curls artisticly.

Carol. This is not how you don’t intimidate the poor girl.

$50 says she’s still teasing Jo because of how easy it is to get a reaction from it.