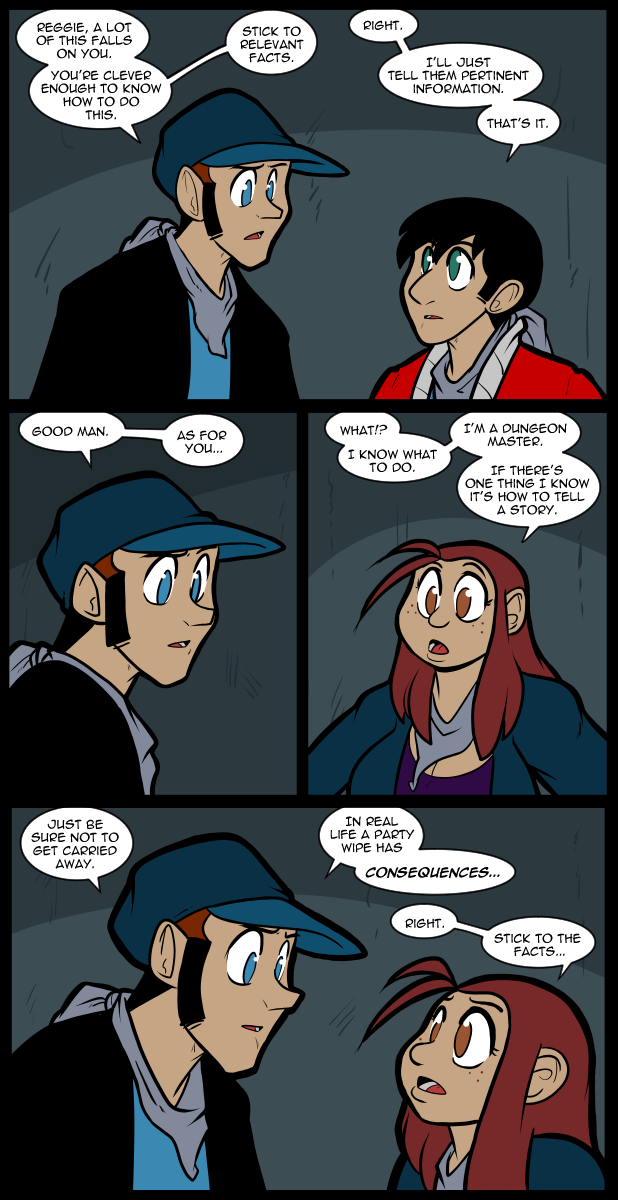 Well, we’re finally in the home stretch. Thank goodness. As much as I enjoyed this experiment I like switching between groups a lot more than holding on one for the entire story. I wanted to try it, so now I have. Will I do it again someday? Maybe if I have a story I want to tell all in a go, but it’ll probably be a while. Switching from place to place makes transitioning from thing to thing much easier. Plus, if you get stuck you can just do something else until you figure out how you want to play the next bit. Still, I feel like this went well & makes a nice little stand apart tale. It will be nice to see Ed, Nina, Mike, & Jess again though. Having such a large cast it’s easy for characters to get pushed to the background for long periods. For me it’s not so bad, since they exist in me all the time, but I’m sure it’s irritating for the reader not getting to see their favorite for months at a time. I try to keep it balanced, but it’s not easy sometimes. Especially since I keep creating more and more amazing characters, with complex & compelling backstories that everyone wants to learn about. Knocking it out of the park every singe time puts a lot of pressure on me to keep producing the best webcomic on the net in all of recorded history. Am I up to the task? Obviously. Excellence is what I expel instead of carbon dioxide. I can’t help but serve up gold. I’m just saying that it’s not always as perfect as it could be, just so much better than anything else out there.

Can’t complain since I got to see and learn a lot more about Victoria in this arc, but it’ll be nice to see Nina again.

We ALL want to see Nina again!

This is going to be good.

lol know your staff and how to make them follow orders

Well it’s about blimmin’ time you agree with your fans’ opinion of your work!

Especially since I keep creating more and more amazing characters, with complex & compelling backstories that everyone wants to learn about.

I hope that’s not “sarcasm font”, because I very much agree.

Of course, your modesty and humility are such that none even need speak of it and yet everybody knows XD

Honestly though, this has been a spectacular story arc. All the characters have grown in their own way, and those insights into Reggie’s and Victoria’s upbringing and family have made them more relatable.

I really enjoyed this storyline. Keep up the good work!

Many years ago I aided a person attempting to get themselves sober. I went to a meeting with him. One young man went to the front to tell his story and one thing he said stuck with me all these years later… He said: “I hate consequences”. It was and still is the single most honest statement I have ever heard.

I’ve always been annoyed by that notion. People spit out the aphorism “Make good choices” like it’s a foregone conclusiong what choices lead to what. Most of the time you have no IDEA what the consequences of your actions really are. You might have some idea, but if you can actually know what a good choice is ahead of time, you have some kind of magical powers. Just ask anyone who suddenly got heartburn after eating at a place they’ve eaten at dozens of times previously. Or worse, food poisoning.

I’m pretty sure the context of the aphorism was to make choices that benefit not only you but those around you. While nothing in life is guaranteed, it still pays to pick the paths that offer the best payouts.

I just hate harmful side effects.

Hope we find out what’s in the smaller safe before we shut the story down, though.

It’s more like Jackie’s MO (and good story-telling procedure!) to have a couple new story arcs, then re-visit the smaller safe a little bit farther along.

At least that’s what I’d do.

I think, in this event- “party wipe” translates to, “we told the cops too much, and then we all get arrested”.
Ugh. Hate having to spend all day in a cop’s interrogation room. Welcome aboard, fresh fish!
*starts playing a harmonica*

Since they happen to be in an underground bunker, if there were any explosives, “party wipe” could also translate to “rocks fall, everybody dies” :)

Oops. Yeah. I hope the survivalist-type guy who built this bunker, didn’t leave any explosive-booby traps in his bunker.

Explosive booby traps are for those things you don’t want to keep or placed you don’t even want to go back to.
The non-explosive ones are the type to watch out for in a bunker.
Things like pit traps that may or may not be filled with unpleasantness would be more appropriate.
Polished oiled sloped floors leading to a spiked wall.
Scything blades at just above ankle height.
Pneumatic pikes popping in and out of walls floor and ceiling.
Dead weights swinging down from the ceiling at chest or head height.
Laser or hydraulic cutters at door handles or access panels.
Water cannons to shove those who passed the pit, into the pit.
Noxious gasses.
Inert gasses.
Extreme Heat (liquid Tin)or Cold (liquid Nitrogen).

So take due warning and research your target bunker.
If they were a DM and handy then stay well enough away.

You bet.
But, IMO, one opinion he had, was to say:
my life is ruined. my son is gone. I’m going to leave this world. my golden castle…which is my bunker with its treasures, can’t be left to the people I like.

So….I’ll take my trip off of the planet, and my bombs + booby-traps will dispatch anyone who tries to take my treasures when I’m gone.

In my view- sometimes people with 0% of hope, decide to destroy everything, out of unhappiness. Whichever.

Oh, also- thanks for the ideas for fictional, non-bombs type booby traps.

I might use them in fiction stories, or in D + D type games. :D

Could have ran a second parallel story thread – Ed and Nina could have gone back to the disturbingly-themed coffee bar during a second date, for example…

Not gonna lie, as much as I’ve enjoyed this arc, it’ll be good to get back to that familiar environment.

Is “consequnces” a reference to- consequnces, the song by Sissy Nobby?