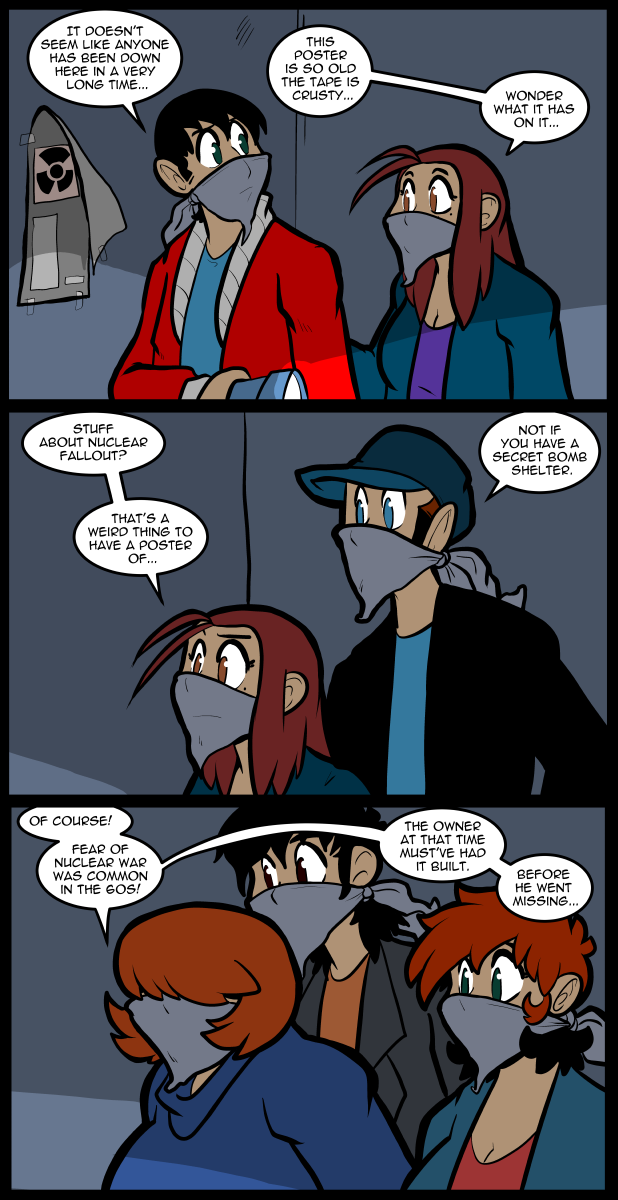 At least one person guessed this as a potential thing they would find. I expect someone will crow about it in the comments. Which is fine. The thing about guessing a story element is that after a certain point some members of the audience should be able to put together the likely elements to lead to a specific conclusion. Any number of the guesses were just as likely until I pinned it down though. Bomb shelter was actually one of the very last guesses, but the speakeasy guess almost made me change the idea because it would’ve been fun. I was too far in to really make the story work though. Big plot elements are easy to guess but people rarely nail down the tidbits that make stuff work. So temper your bragging if you figured it out. I asked at least one of you to tell me how they get to the plot points, but no one ever answers.

I almost had Alex put her hair up because of the mask, but then I got amused when I drew her with it down. She’s basically a talking hairdo & it makes me laugh.

Calling it now, the old owner died down there and because no-one knew about it, they were never found.

I hope that’s all, and that the owner isn’t still living in a bomb shelter and thinking the facemasked individuals are post-apocalyptic raiders…

really could go either way. the fact that there’s Still electricity (i think that was mentioned?) kind of leads one to believe that there’s at least Somebody still alive down there keeping up on the bills. whether it’s the actual Owner though… we shall see.

Well I did make a supposition on the shelter thing but there is still much to determine as yet.

The place was built in the 60’s and it is now at least 50 years latter.

– I make that suggestion only because I know that Toronto New city Hall’s BMCS was built on such a system and it ran uninterrupted outside of one small part failure for that long before the bureaucracy decided to “upgrade” and now the new BMCS is under continuous babysitting mode.

it would explain why the tape is crispy…

I can see her blushing like a lunatic and following it up with “This one isn’t even supposed to exist.”

Followed by her hiding it under her top…

Alex being nothing but hair and a mask is definitely funny, thank you.

Didn’t someone already call THAT one, too?

Not trying to blow my own horn…[insert your own dirty joke, here], but yep, I did…on the previous page.

Alex does rock the Peppermint Patty-wearing-the-ninja-clothes-look, doesn’t she?
:D

I guess, if they do find a dead body in this [hotel?] at least Patricia, who has legal permission to be in/use this building for her storage, can call the cops, and then the whole gang doesn’t get arrested for illegal, urban exploring…today.
I’m up too late. I’m off to do the snoozings. :)

I thought they had permission?

Yep. I missed that part.
But in my mind, fictional cops might get kinda alarmed, if they get called about a body in a hotel and find: 1] a bunch of masked people, 2] a dead body, and 3] the masked people found the dead body…[ In an underground apartment that isn’t supposed to exist!]

That would mean a HOT time, for the cops, in small-little-town Land! :D

Keep thinking of the sheepdog on those Wily Coyote cartoons-don’t recall which was Ralph and which was George, or if they even kept track.

A quick check of the archives – what? – You don’t archive Looney Tunes? – reveals their names as Ralph Wolf and Sam Sheepdog.

From the Rolling Stones:

“The floods is threat’ning
My very life today
Gimme, gimme shelter
Or I’m gonna fade away”….

Ok, that was supposed to be lightning bolts, like the kiss logo,… I am full of fail this morning.

That’s OK. I’m kinda confused, or mystified, by smartphones.
Why carry them?
Maybe I don’t want things buzzing or ringing in my jeans! :D

All hangs on how much of a thrill I want: front pocket, back pocket, or for Saturday night date– at the local restaurant…
Nevermind. Wasn’t even silly.

Old bomb shelters often have cool stuff. If it was government subsidized there would be Geiger counters, dosimeters and at least emergency water supplies.

ooo… some of that stuff could come in handy for future ghost hunting expeditions!

The ones that our high school had were equipt with off/on switch, two knobs, and a gauge. Inside was an aluminun vacuum chamber, some sealed glass-tube resistors of a type I’ve never seen before or since, and a switch for 1X, 10X, and 100X readings. Used a 22 volt battery. The gauge was log style, not linear, … Anyway, Luray was so close to D.C. as to make linear Vs. log readings pointless– the levels were gonna be off the scales if anyone was there to read the gauges.
Lots of folks bought a Lot of concrete though….

Speakeasy that was turned into a Bomb Shelter?

i’m trying to remember the drink we used to serve when i was a bar tender… it’s a shot of whiskey dropped into a glass of beer… what was it called… “depth charge”?
anyway, point is, there are a lot of bomb/explosive/”live ordinance” based-named drinks out there to support such an endeavor. ^_^

Isn’t that also a boilermaker?

I think wikipedia has an article about cocktails made by dropping shots into other drinks. “Depth charges” are included in that article.
The article is named- Bomb shot.

I would like to express my thanks for Alex the Talking Hairdo.

Because of the subject of calling things, I’m calling Blast From The Past (1999 dir. Hugh Wilson, starring Brendan Fraser)

Her alias when she lets her hair down is Gossamer.
All you will get to see is her Tennis shoes.

Next to everyone else’s large eyedness Alex almost looks like a holdup woman.

Wilson from Home Improvement is actually her uncle….

Oh, Gawd, I spit coffee for that! Brilliant!

Dang, where is the up-vote or LOL tags?

I’m guessing- that is they find a dead body, then…someone really, REALLY needs to hold Jo’s hand. IMO she went almost comatose when she was told about Thomas’ haunted car.
Hm. I can’t wait to see what’s next.