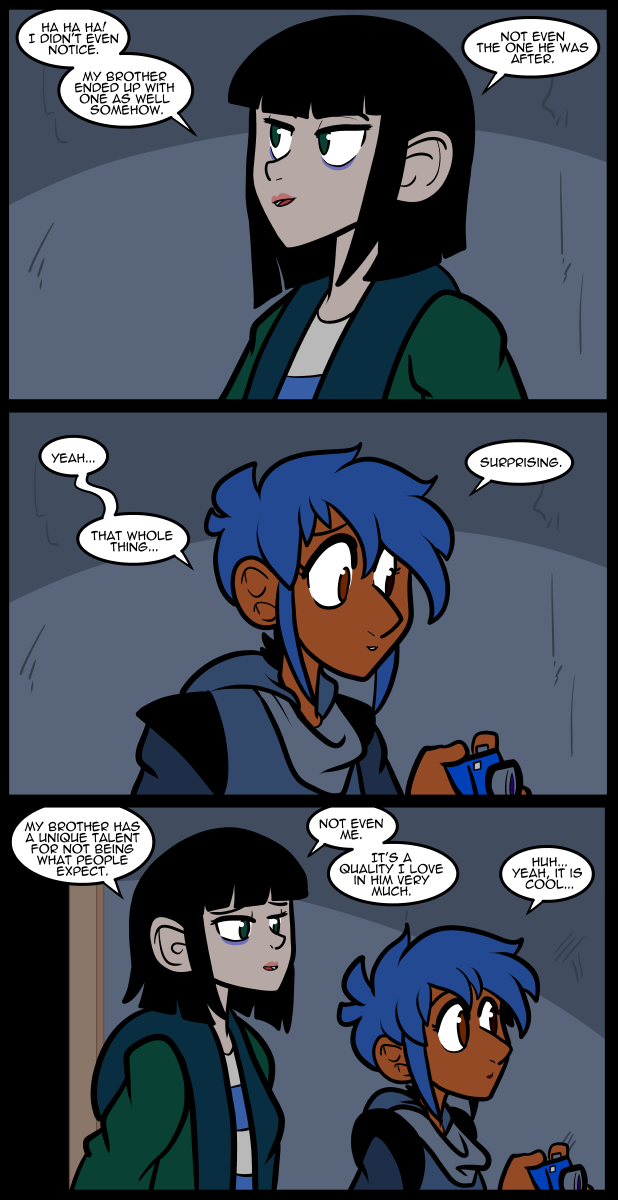 It’s not an afterschool special in Reggie’s family where they tell each other they love one another every day. Victoria is voicing something personal to a stranger just to hear it out loud. Sometimes it’s easier to talk to someone you don’t know that well & don’t really expect to interact with regularly, or possibly ever again. At the same time she probably hopes that what she says will make its way to her brother second hand, so he’ll know, but they won’t have to go through the embarrassment of actually saying it face to face. For some people it’s difficult to be earnest and sincere. Letting someone know how you really feel makes you vulnerable. It’s giving up power. That’s an aspect of love people don’t always think about. To tell someone they are important to you gives them leverage. If the balance should shift you are at a disadvantage. Unfortunately people exploit that every day.

Nice siblingosity buildup with this whole arc to “a unique talent for not being what people expect”.

Right. I think it’s a masterpiece of writing that turned Reggie, who in the beginning was more despised than Wes, into one of the most sympathetic characters in the series. A lot of us had written him off as just some pompous jerk; now we know he’s a pompous jerk with a soft spot.

Once again this is master-level writing and my hat is off to you sir.

I’m hoping to see Reggie one day put on his customized name badge (as seen in comic 880).

We tell our sibs, rarely but regularly, but rarely, that we love them; nearly always where we are one-to-one, with no one to overhear. Two maybe three times a year, a hug… Sometimes where others are. Most often the fist-bump ‘plosive, sincerely – but ironic not sarcastic.
Ironic cause we’re all older than the dinosaurs, but after coming out of the ocean. And ONE of us seems to wanna go back to the oceans, you know? Are we not men? We are DEVO.

The level of skill and subtlety IS to be savored; like the fine Webcomic it is, — but without the pomous labeling that comes with an appellation number, scrollwork Art Nouveau label, with a vintage date from before your were born, and fancy import duties.

So when Reggie defied everyone’s expectations by nailing his hand to a wall, did Vicky find that lovable as well? Because I’m pretty sure their parents didn’t…

Not really the same thing, but I expect she laughed.

I didn’t expect that from Victoria at all, but it really fit. She’s got a snarky outer shell, he’s a hard person to love, but every so often she can admit that she does. I gotta agree with the other guys; your character building, defining, and growing is extremely good. Thomas and Carol’s love story is super sweet, Ed and Nina’s new relationship is exciting and sexy, Jo and Mike are a lot of fun in different ways, and Reggie is the dark horse that has been reluctantly making everything he gets involved in better somehow.

To tell someone they are important to you gives them leverage. If the balance should shift you are at a disadvantage.