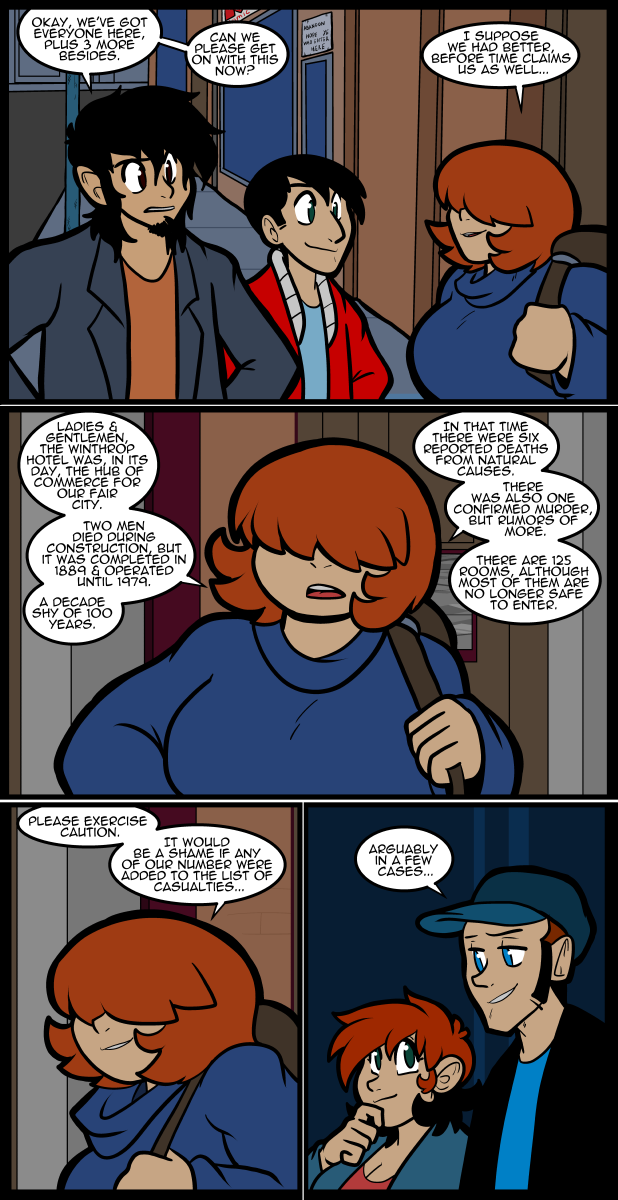 It’s entertaining to me that Alex became the defacto leader simply by way of being capable. Or at the very least she’s controlling a significant amount of power because she did actual work & John just recognizes & accepts hat it’s her show now. He’s not ego driven in the way Reggie might have been, or even Thomas, or Carol for that matter. He just wants to do the fun stuff & is fine not having to be responsible.

Being basically in charge at the library Alex is used to this role. I think she’ll flourish in it.

And I suggest Jo go in anyplace first if the floorboards are sketchy.

WE CANNOT RISK HARMING TEH JO.

I think Reggie weighs as much as JO. Let’s send [him] first. ;D

Yeah, Reggie is cast — so he’s not expendable, … Unless there’s a sub-basement and Zule demands a human to snack on. Xp

Sadly he has plot armour of the most atrocious design.

Now if only we had a Baldrick and a cunning plan.

Maybe I’m biased, having followed this comic for over a decade now (since it was spotlighted on Drunk Duck!), but I think this scenario would make a great game. It’d be like “Maniac Mansion” or a comedic version of “Sweet Home”.

At any rate, knowing the characters the way I do, imagining how they’d interact with each other and deal with ghosts… I’m really looking forward to this.

I would love to make a Maniac Mansion style game. It’s one of my favorites.

If I meet any aspiring game devs who want to do an adventure title, I’ll send them your way, Jackie. :)

As long as Alex continued to show that she knew what she was doing, I would be happy to leave the decisions to her. Plus, like many men I’d have difficulty saying No to a buxom cute redhead.

Deaths in the construction of large buildings are sadly normal, even nowadays. Though far less common today than in the past, it is an accepted part of the job.

Hmm, accident-prone Reggie in a rickety building, wanting to impress Alex and show up the rest… What could possibly go wrong?

He pulls a Buster Keaton montage and ends up with the building collapsing around him and him standing in the middle of it unscathed, just very very dusty.