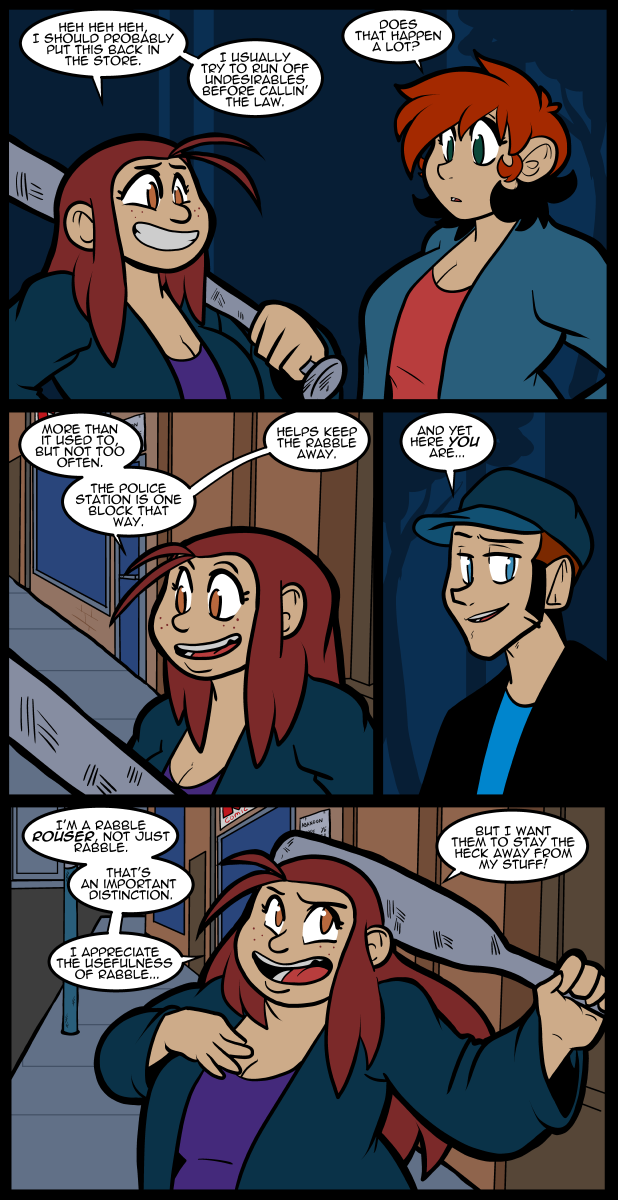 The bat is just to scare off he timid. The police is for when they say “go on then.”

I don’t own the original Muppet movie. Or at least I didn’t. Every time I’ve gone to buy it I was either broke, or it was out of print. Seriously, I’ve been trying to buy it for almost 20 years now. The stars just kept being poorly aligned. I remembered it the other day and it wasn’t on amazon. It was like, damn too late again. So I went to ebay and some guy had a ton of them for $7 on dvd. Free shipping, you know I’m down for that. So now I can watch this movie I’ve only seen clips of for the better part of two decades. That may seem silly but I was, and still am really, a big muppet fan. I loved the single season they did on ABC or whatever, but Disney hasn’t really figured them out, or maybe they’re a relic, like myself. In any case I’m stuck with pre death of Henson stuff for the most part until someone figures them out again.

The more Rulette talks the more I’m enjoying the character.
The whole bat thing reminds me of this gnarly only oak baseball bat my Step-Dad had. It had the name “Penny” carved into it and if you asked him why he’d just answer with “In for a penny in for pound.” and kind of wave the bat in a menacing fashion.

I really want to know this:
Does he mean something like- If you mess with him and Penny, then you’re in for a Pound(ing)?

It’s been 21 years and I’m still trying to figure that out my self. He’s always refused to to clarify when asked what exactly he means by that. I think he thinks it makes him look mysterious and cool, I think it makes him kind of look like a butthole.

I think he means “I had an idea two decades ago. It was stupid as hell and I didn’t realize until AFTER I’d carved a name into the bat, but I’m never admitting it.”

IIRC “in for a penny, in for a pound” is a really old English expression used to express someone’s intention to complete an enterprise once it has been undertaken, however much time, effort, or money this entails.
– Old British currency was as follows – Farthing, Ha’penny, Penny, threpence, sixpence, Shilling, Florin [a had a few of these as a kid until the break-in], half crown, crown, pound

Now me, if he had not explained the meaning behind it I would have assumed it meant “A penny for your thoughts” but hey I am an old timey Game Master and such misuse/abuse of the language is a given.

What happened to “tuppence” as in

Maybe they’re just smudges, but if they’re not- I REALLY would like to see the story, about how the many dents got on Patricia’s bat. :D

On the Muppet topic, did you know Brian Henson, Jim’s son, is doing stuff for adult themed movies? All I’ve seen is the Happy time Murders, which is a good movie IMO. Kind of a buddy cop/noir movie starring Melissa McCarthy. Definitely worth a look, but FYI it’s rated R for a reason. All i’m saying is I’ll never look at silly string the same ever again.

Hell, Jim Henson himself did adult-themed stuff. If Brian’s doing so to, more power to him

Sometimes people forget there are only so many hours in a day available to watch movies. I’m very much not caught up with the last couple years or so.

Rulette should run for Congress with that attitude.

On the Muppet line of thought there was the original “Muppet Show” which was produced in Britain so wasn’t bollocks-ed up like anything the American Networks got their claws into.
The reboot tried but just wasn’t as much fun.

As films go there is The Dark Crystal which was awesome when it first came out and scared the poop out of the little ones because parents back then were just as stupid as they are now – its puppets so it’s a kids movie – level of stupid.
I am looking forward to the prequel series coming out this fall.
If you don’t have Netflix then I recommend sneaker-net – aka – find someone local willing to record it for you on a hard drive and walk it over to your place.

I grew up with the Muppets on TV when I was a kid. The original Muppet Show was also during the major era of TV where stars relied on major appearances to make money on the side (or they had contracts that had TV appearances built-in). It was also very grounded in pop culture of the time. We had a lot of cooking shows, a lot of soap operas, a lot of romcoms, a lot of action TV, etc. The Muppets picked fun at all that and some.

I guess I would liken the Muppet Show’s popularity to that of MAD magazine’s back then. It was topical, satirical and largely enjoyable if you liked TV comedy/variety shows (think Carol Burnett). Nowadays, in an era where things like MAD magazine is now a cancelled publication, everyone watches Netflix mini-series and hardly anyone watches network TV anymore, the Muppet Show has to evolve to appeal to the younger crowd who is still willing to watch them. Us old folks are all going to die eventually, so it can’t stay exactly the same since we can’t be the only target audience.

BTW, I like the Muppet shorts they do on YouTube. And I liked the first updated The Muppets movie that came out back in 2011. I haven’t seen the newest one (although that was like FIVE years ago).

I was a big fan of the Muppet Show as a kid, and when I went to university it was in syndication, every afternoon at 430. I was living in a large residence and pretty much the entire floor would be out in the common area watching the show, including singing along with the opening theme song, then we would to down to the cafeteria to eat lunch. And it wasn’t just our floor, it was a common event in all three buildings, so there would be a flood of people trying to eat at 5. I always thought it was funny that the supposed future leaders of this province and country were all avidly watching a bunch of puppets being silly.

One thing I’ve noticed on rewatching a number of the old shows on Youtube is that a lot of the jokes were more refined than I noticed as a teenager/early twenties guy (I’m not sure when they were originally aired in Britain and the US, but here in Denmark they were aired during the latter half of the 70’s/early 80’s – and I was born in 61). Like this sketch I remembered, where a flock of sheep sing ‘Ram-a-lam(b)-a-ding-dong’. Only on rewatching did I catch that Kermit introduced it by saying they would go ‘where sheeps graze’ – after which they started by playing Bach’s ‘Wo schafe weiden’ (for those who don’t know the language: That’s German for ‘where sheeps graze’).

Truth be honest, it’s difficult to legitimately re-create the same spark that Jim Henson put into the original Muppets because Henson himself was a true loose cannon in his ideas and I mean that in the most positive sense. He loved explosions, he loved satire, he loved pushing the envelope, and some of his humor got pretty damn dark at times. For some, the Muppets are felt and strings being operated by some very talented workers. It’s more than that, MUCH more.