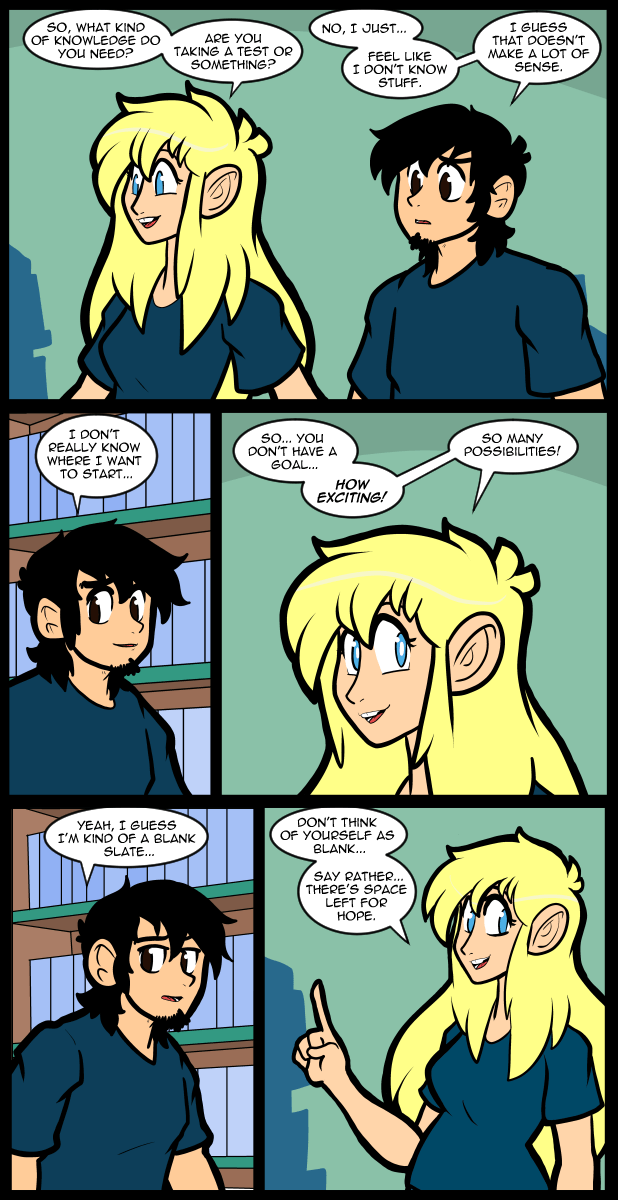 Nina’s last line may seem like a throw away line, but how you choose to frame a concept can have an effect on how you approach it, or your mental state while dealing with it, or any number of things. Nina is being positive about John’s apparent self consciousness, perhaps instinctually, to help him reframe his quest in a more positive way. In a way she’s telling him she believes in him without actually saying it.

Branding, advertising, politics, all of these things do a version of this. It’s manipulation. Which, like any tool can be used for good or evil. It depends on who is using it.

A relative of mine used to say this, about learning, + new things:

Let it all be a wonder to you.

Love the glow in Nina’s eyes in the middle-right panel! <3

ever the optimist, that one ^^

A canvas ready for paint, an ingot yet smelted. Wood to be carved. He has potential and ambition to improve himself. And as long as we try, that’s progress.

What we need here is one of my favorite books of all time, The New York Public Library Desk Reference. Maybe the CIA World Factbook too.

That reminds me of something I heard someone say about why Spider-man (Peter Parker) does what he does vs. why Spider-Girl (Mayday Parker, his daughter) does what she does:

It’s a subtle difference, and a huge part of why I recommend the Spider-Girl comic to everyone. :D

Which is reasonable given how Spider-Man got started in the first place.

One of my favorite books is the “International Compendium of Practical Knowledge” (1895). The chemistry section was truly a dangerous thing for a teen age boy. It’s a little dated now but an encyclopedia all in one volume.

Some people like to use the term that they’ve been “struck with knowledge”. In my view, it’s a green light to hit someone upside the head with the International Compendium of Practical Knowledge! :P

Sounds like a useful book to have scanned and contributed to Project Gutenberg.

It’s been a couple of years since I checked but there were several books of a similar nature already on the site. I do have a couple of turn of the last century tech books that would be a good contribution if I had the time to sit and scan them.

Same thing, to me. Empty land plots, empty houses for sale, empty shops for sale; all spaces for hope! Similar with media for arts & crafts. People are complicated, but there can be something of the same.

If he reads it, he will learn…

“A little knowledge is a dangerous thing.” Too many people learn the concoction before the antidote.

I wonder is John will turn into “The Great White Nope.”

The Cheshire Cat- “Where do you want to go?”

The Cheshire Cat- “Then it doesn’t matter what direction you take.”

(From the novel- Alice in Wonderland.)

Hi! How is everyone? I’ve been busy.

No, really. After regularly reading webcomics of one sort or another for about 2 decades, I just spent over a year not checking any at all.

I got my A&P! I dropped out of flight school, though. That schedule was a bit too much.

Anyway, take it easy. I’m not really back. Just wanted to say “hi”.

Well, it was nice hearing from you.

In case Yawnitz doesn’t look back in, an A&P is an airframe and powerplant. It refers to a person specifically trained to work on aircraft.