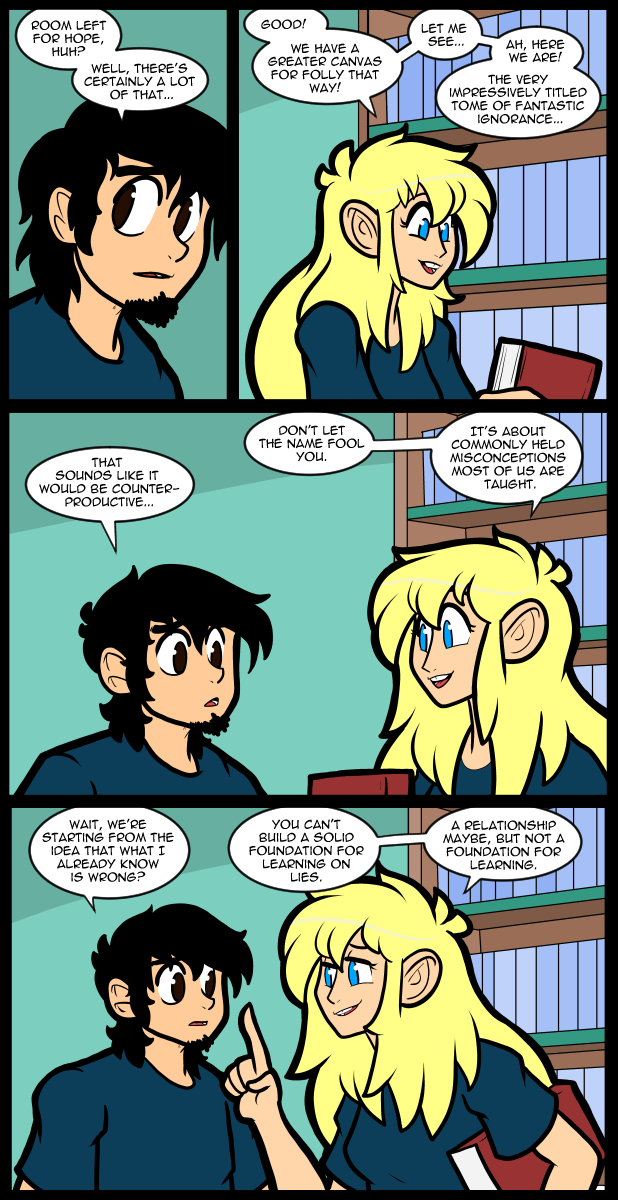 Since I had to take care of some IRL stuff I’ll forego the intricate blog tonight. Remember to like comment & subscribe, ring the bell for notifications & sign up for patreon of subscribestar to support the channel.

Blah blah politics blah.
Actually I wanna replace those blahs with big rants. But I think I’d rather not willingly/intentionally cause the comments section here to become a battleground.

…which is sadly too easily done. If your opinions didn’t start a fight mine would have. :)

Too many people on either side of the Partisan Abyss hold their opinions for various mechanisms that boil down to emotionality. Probably me included. All I can say is I *try* to vet my opinions for common sense and reason.

Decided to re-read the entire comic over the weekend. What a lovely ride to go through all of that again. I’m a real big fan of your writing style. You do such a good job of making the characters feel real. It also reminded me of certain aspects that I had completely forgotten about over time.

I’m glad you had a good time.

I actually searched for the Tomb of Fantastic Ignorance. I really wanted it to be a real book that I could read.

Maybe I should write it. XD

You could break it down into two-page articles.

Have each article blocked out like an entry in the D&D monster compendium.
That way there would be no pressure on the number of entries released at any given time. Also there would be no need to release things in any specific order.

It could be done through a collaborative effort with submissions going through a vetting process. This would require trusted editors though.

Fund the work through Patreon of course.
Each entry could be released as an individual pdf.

Now going way way way overboard and off the beaten path like the shipwrecked parents in frozen.
For those who read in more convenient locals, like public transport or the WC, a suggestion; The hard copy versions could be released in Manga page size with a generic spring back binder available for ease of reading and transport.

/hmmmm
I think I may have too much time to fantasize on things.
Not a one-person project except maybe at the start – you need a team of people with skills and time on their hands to do it right.

Tome, though it there were a tomb that would be awesome too.

You probably want to read Lies My Teacher Told Me, which is about American History. Also, the De-Textbook, which is more general knowledge.

Well a majority of recorded history is “coloured” by those who wrote them.
Be it bigotry and racism or just all out lies to pain the writers group as heroes etc etc etc.

I will have to look up the Lies book and see what I was right about and what I missed in the translation into English. ;)

There’s a ‘Common Misconceptions’ page on Wikipedia. And the traditional day to read them, via XKCD.com, is the first Tuesday of February, aka tomorrow.

I also want this to be an actual book!

Same here! The title reminded me a little to “The book of barely imagined creatures”, that describes one living organism for every letter of the alphabet. Some of them are rare, some of them are super-common but all have attributes and histories that are just fantastic, for one reason or another.

you must unlearn what you have learned

Your insights into people are on par with the fictional Miss Marple, who gleaned her vast knowledge of human interaction merely by paying attention to the comings and goings in her small village, and extrapolating from there. If it is not clear what I am trying to say, I find you quite clever and love the way you honestly portray human interactions. You are a master storyteller. I thank you for the entertainment you have given me.

I admit, I’m wondering what the hell the “very impressively titled tome of fantastic ignorance” actually IS.

I hate to disagree with Nina, but I think the better place to start is to provide counterexamples to let John understand how to unlearn.

It’s one thing to say it; it’s another thing to apply it…..unless you have a muppet that is wrinkled and green.

Sometimes the trouble isn’t what you don’t know, it’s all the things you know that just aren’t so.

Is it just me, or is Nina getting progressively hotter as time goes on?

Either that or the lockdown is having us get ever more …… squirrel!

To quote a fantastic Weird Al song – “Everything you know is wrong”.

Also there was something about a “rabid wolverine in my underwear” which I guess is profound on some level. Hey, it’s Weird Al.

Saint Peter: not a fan of nehru jackets

Also the title of a Firesign Theatre record. :)

When you have the opportunity to travel back in time, leave your phone bill out of it.

…..aaand tell yourself to invest, a WHOLE lot, in that new company:
“Apple Computers”.
;D

Around 2000 investing 10k would net you 1.3M
If you bought in 1980 at 1k …. cost of a PC back then …just under 600M today not including dividends …. dang I should have bought the stock, stuck it in an RRSP and not bought the Apple IIc at the time.

Is this book title a nod to the amazing QI Book of general Ignorance?

“a relationship maybe”….
A few dates lied something little early … then became big ones later on

“FADS AND FALLACIES IN THE NAME OF SCIENCE” by [MARTIN GARDNER] was published back in 1952, & revised in 1957.
This link accesses a free-to-download copy, in [*.PDF]-format:
[https://emilkirkegaard.dk/en/wp-content/uploads/Martin-Gardner-Fads-and-Fallacies-in-the-Name-of-Science.pdf]

It’s not good-enough to just SAY that something is a lie.
You need to support your words with evidence that explains how you arrived at this conclusion. Mr. Gardner has a very approachable style of writing, that makes even the most unfamiliar topics understandable to the outsider.

This doesn’t mean that he’s un-biased. Rather, he does NOT play favorites, & shows no mercy to any belief-system that can’t defend itself from close scrutiny.

Whether it’s the “Hollow Earth” theory, or “Biorhythms”, or “Flat Earth” societies, or “Dianetics”, you’ll find a wealth of different ways that Humans have deluded each other for profit, or deluded themselves, with well-intentioned (but incorrect) conclusions.

It’s maybe about the size of an American football /maybe 1000 pages.

[The last co. to make this book is the US company- Time Magazine.]

I think most of these books have color photos in them, if you like cp(s).
You can probably find a copy of this book online, if you want to.

Ok, so is it just me, or is Nina’s hair more of a mane now? I seem to recall her having a more sleek look most of the time. I’m not complaining, just checking my memory.

I sure would like to know what kind of shampoo and conditioner she uses to get such luscious locks like that!

Man, I dunno about y’all, but I can’t even build much of a relationship upon ignorance. I have to at least know someone’s name and general behavior around others like me before I even think about becoming friendlier. Even among friends, I feel like someone on the outside looking in…it may just be me who thinks that I’m like that with them. But I also just don’t trust like that.

It makes me wonder how many people I know only surface-level. Maybe that is what she’s talking about? I have nearly no one I’m actually myself around. It all feels like lies even if I want to try and be more sociable. I can never act myself around anybody without difficulties, it seems. I’m afraid of forming exactly what she describes…a relationship built upon lies. Those aren’t built to last.

So a few corrections you’ll find are that the Pilgrims of Plymouth Rock were Brownist Separatists, not Puritans. Squanto’s name was actually Tisquantum. The meal shared was a harvest feast not a thanksgiving. And the first Thanksgiving in America was ~100 yearsprior by the French in what is now Florida. BTW, Spaniards held the first American Thanksgiving that was a mix of Europeans and Native Americans.