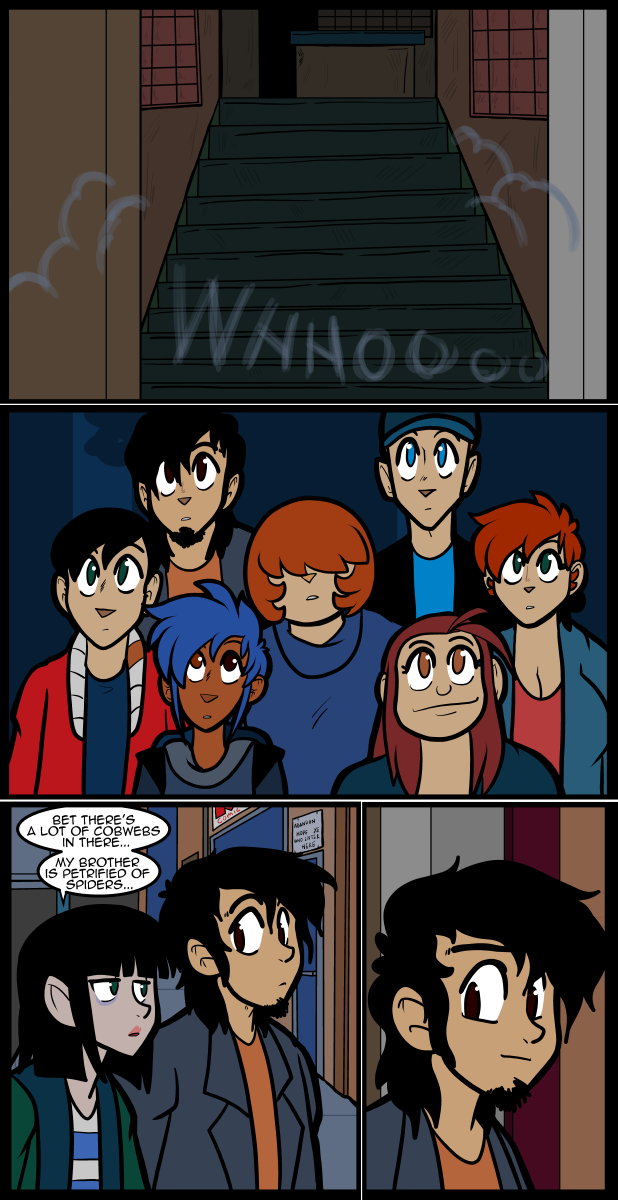 Victoria loves her brother… in the style of their family.

There is a strange feeling hat hangs about old places that have been left to rot. Maybe it’s just survival instinct, but it always makes me feel like the presence of those who came before are just out of view. Some churches have a similar feeling. The logical part of my brain exists at odds with that part that feels these things. I guess that’s just the duality of being human.

Yeah, I get that feeling. Stalking the halls of a church just after the children’s services end but before the adult services begin around 1pm means a lot of rooms with the doors only cracked, but the lights off. Can be creepy, especially when you’re trying to get somewhere else in the church and picked the fast, but creepy route. Can’t say how many times I had to check over my shoulder to make sure I didn’t have a Church Grimm or Holy Spirit following me around, haha (I joke, but seriously. It is creepy and the pediophobe in me always had me paranoid about what might be moving about when the lights are off and the humans are supposed to be away)

Locking up the building after everyone has gone home is fun, when I did it, it required checking all the windows and doors. Turning on the lights wasn’t worth the effort, so we used flashlights.
Though it wasn’t exactly creepy, mostly lonely, in my experience.

Being someone who grew up in a danish family and went to a very danish lutheran church, the threat of a church grimm being angered by trespassing still to this day makes me look over my shoulder as I walk around our hundred year old church if there are no lights on, even knowing that it was something clearly the adults would tell us as kids to keep us from exploring the older more dand and decrepit parts of the building.

See, with me it’s because there’s definitely squatters in there. I’m not too scared of the supernatural, it’s the real things that creep me out.

Then you need to watch this.

This is the wrong comic for this.
Reggie’s not a spider man!

Reggie puts on his webshooters and says: “With great POWER comes great POMPOSITY!”
:)

I like John’s subtle “hey, this might be a productive use of my time too” look there. He’s gettin’ the dirt on Reggie.

I expected Simon Belmont cracking his whip ready in the second panel. :P

I’ve always felt since energy can exist in multiple periods of time (quantum physics – TL;DR explanation), that sometimes what people perceive as “ghosts” or “phantom voices” could be just an echo of energy from the past. Not an actual spirit, but the quantum remains of energy/light/sound in a location.

I like this explanation, particularly since it appeals to my sense of rationality while still leaving room for the fun of the mystery behind those odd feelings we humans get from old places. :)

That’s usually referred to in the paranormal community as “residual energy”.

I always got a weird absence of presence in churches, that’s kind of what was so fascinating about them to me. Like, I’m a pretty anti-religion person in general (believe what you want to, I don’t care, but organized religion = bad in general), but when I would look at sights around old European cities, I would often step into the old churches.

There’s this odd hush in a church, even when there’s a service going, it’s like the sound bounces weirdly off the walls and comes into your ears muffled. Maybe this is just me, but it always seemed like there was a sound barrier around the church before you stepped in. Mind you, I only really got that feeling from the really old churches. If you walked me into some newly built one somewhere, after I was done hissing and speaking in tongues, I’d probably not feel the same quiet :P Maybe it’s just the feeling of a lot of history in a place? I don’t know, I just found it interesting.

That made me think-
[ discussions on beliefs [somewhat] aside…My belief is- I let people do whatever agnosticism, theism, atheism, religion with theism, or other category they like, as long as they don’t: pressure me to believe or not believe in something, + don’t break my, or someone else’s, rights]. A person’s views on religious beliefs, + non-religious beliefs, or other views, are up to them, in my opinion.

Anyhow- I had an aunt-type relative, that had a white/ cream colored, big house.
It was sort of like the cartoon, Addams family house, but without the cool tower.
Maybe it was built in 1900.

I was almost NEVER comfortable in that house.

Her wealthy relative left it to her, + she maybe filled it with 1940s, or pre-1940s furniture.
It always seemed like a ghost story -like place to me.
Lost of uncomfortable stuff: you’re always afraid of breaking things, house features that seemed way to old for most people’s styles, and lots of: tall…creepy corners, long rooms, and long shadows, to wish you a very…good night.
Ugh. Please go with a 1970s disco-style, next time, Auntie. ;D

Empty places are NOT creepy.
“Creepy” is the sensation (inherited from the survival-instincts of our caveman ancestors) that comes from the suspicion that a place might NOT be empty.
If you can perceive hard evidence that the place is truly empty, then the “creepy” will go away.

[EmCeeKhan]:
Perhaps you’ve heard the theory that, if emotions are intense-enough, the materials of the surrounding area might “record” them, & “replay” that “emotional energy” when conditions are right. If true, this might help to support the long-held idea that “ghosts” are usually people who passed-away with “unfinished business” weighing heavily on their minds, such as “unfulfilled revenge”, or some promise which they failed to keep before dying.

I sometimes wonder if “past lives” of biological ancestors might be some of what’s encoded in “junk DNA”. Not real seriously, but it’s an interesting thought.

In the second panel Rulette looks just a tad less concerned than everyone else, even without her bat.

She’s been inside once a year at least for many years.

I think of a lot of it is the fact that the places people have built are intended to be inhabited. So when they’re empty, especially for long periods, it feels a little surreal. Ann’s that’s when, consciously or not, our brains start trying to “reoccupy” them by filling in who we think we there before us. That’s part of why I went into historic preservation as a career; I get to live and breath those places.

Plus, there’s always the off chance of encountering ghosts or spirits (and, yes, I really HAVE encountered them)!

Stupid autocorrect – that skips have read “AND that’s when…”

I should point out that one reason why an empty church may seem off is that we associate places like that full of people and noise. the other reason of course is that most churches are next to a grave yard….. so if it feels like it is haunted then there is good chance it is.. lol

“My brother is terrified of spiders” This is the first time I’ve ever found Reggie relatable ;-)