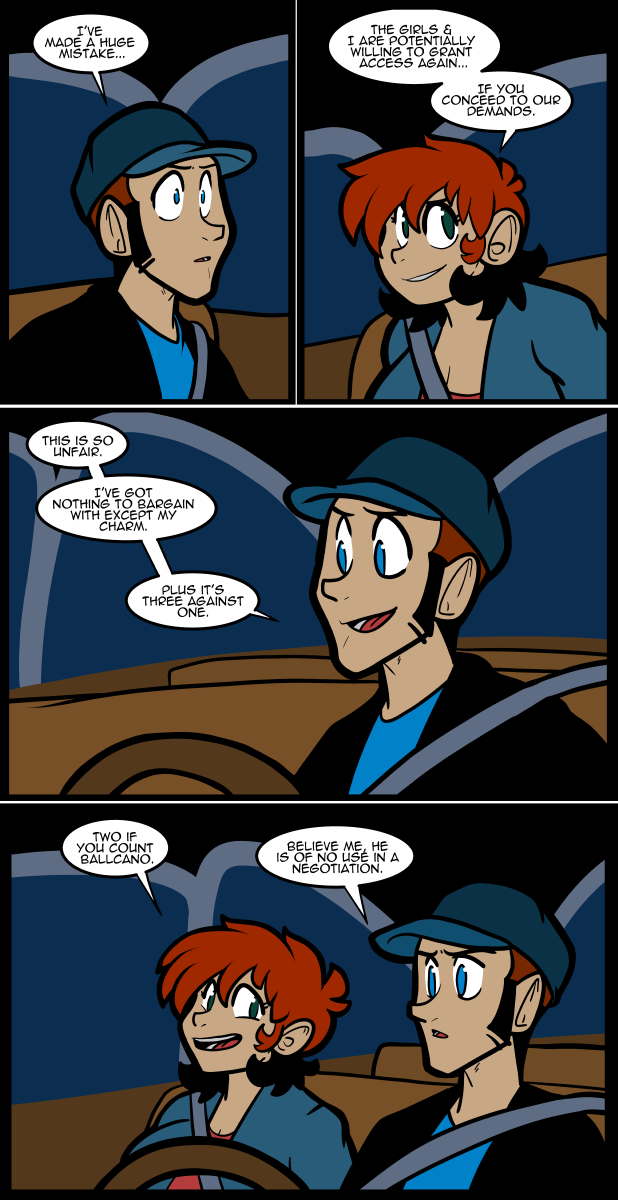 In case anyone has forgotten Ballcano is Carol’s pet name for Thomas’s penis. Or at least what she calls it to tease him.

Somebody found one of the old shows I’ve talked about here before. It’s called The Great Book Escape & it’s on youtube if you want to see it. In fact, he main actress is still acting. Quinn Cummings is her name. All the pertinent information is in the video description. Anyway this is the one that had The Ghost In The Shed as one of its segments. I’d found the animated portion by itself before, but could never find the wrap around segments.

This is a different one from a similar show where a different kid gets trapped in a library, but they have to haggle with some kind of disembodied voice as far as I can recall. I can’t remember if the lead was a girl or boy.

If the previous strip was all buildup, this one is all payoff, starting with the Arrested Development nod, and ratcheting up to Thomas’ final admission.

I do not remember when she started calling it ballcano…

1411 is where the interaction starts.

so let me guess when the twin peaks of mount carol (pun intended) shake then there is an eruption? lol

In my head ballcano is stressed but not rhymed like volcano and you can’t tell me different.

ballcano* (kek muscle memory added an “n” without me even noticing”

The ballcanon is his special move.

how do you pronounce ballcano?

My guess would be just how it looks.

At the risk of talking like “Captain Obvious”, I think it is a spoof of the word, volcano.
So, IMHO, “ballcano”, would be pronounced like, “volcano”.

I always pronounced it ball-kah-no, like it’s Italian or something…

I think the other show you’re thinking of is “Hocus Focus” {https://en.m.wikipedia.org/wiki/Hocus_Focus_(TV_series)}. Ran one season on Nickelodeon, 1979

I have to admit, I thought the comments section would be wall-to-wall dudes sharing their own names for their junk. I’m pleasantly surprised and yet just a bit disappointed.

Is having a name for your junk a prerequsite for being in the guy club or something? If so, I guess I’m not a member.

Hey, by the new rules you don’t even need a member to be one! So, if we stick together they’ll be unable to thrust us out — though in all honesty I’m not that fond of being stuck in a man cave …

“Ballcano” is probably the most masculine nickname I’ve read used in reference to a mans junk. I’ll definitely have to remember it for use in casual conversation. It just rolls off the tongue.

I remember a show on PBS called Once Upon a Time where a witch traps a librarian (named Marian, ironically) in her tower with a library, and won’t let her go until Marian tells her enough stories to satisfy her curiosity.

And there’s The Pagemaster with Macaulay Culkin which had a similar situation (trapped in fantasy land in a library until he manages to navigate the stories to get out).

And so here we see Carol using sex to get what she wants: a time-honored tactic of the fairer sex (I could have used “gender” to avoid redundancy, but that word is currently being redefined and so its use would have been inaccurate.)

That is not what happened here. Not by any reasonable metric.

aaaaaand DONE! after a year and a half of not being able to remember this comics name even though i read it every day for nearly four years (military head injury that helps me forget important things) i am caught the fuck up! thanks for waiting!

Godwilling I’ll be here the next time you forget as well. Nice to have you back.