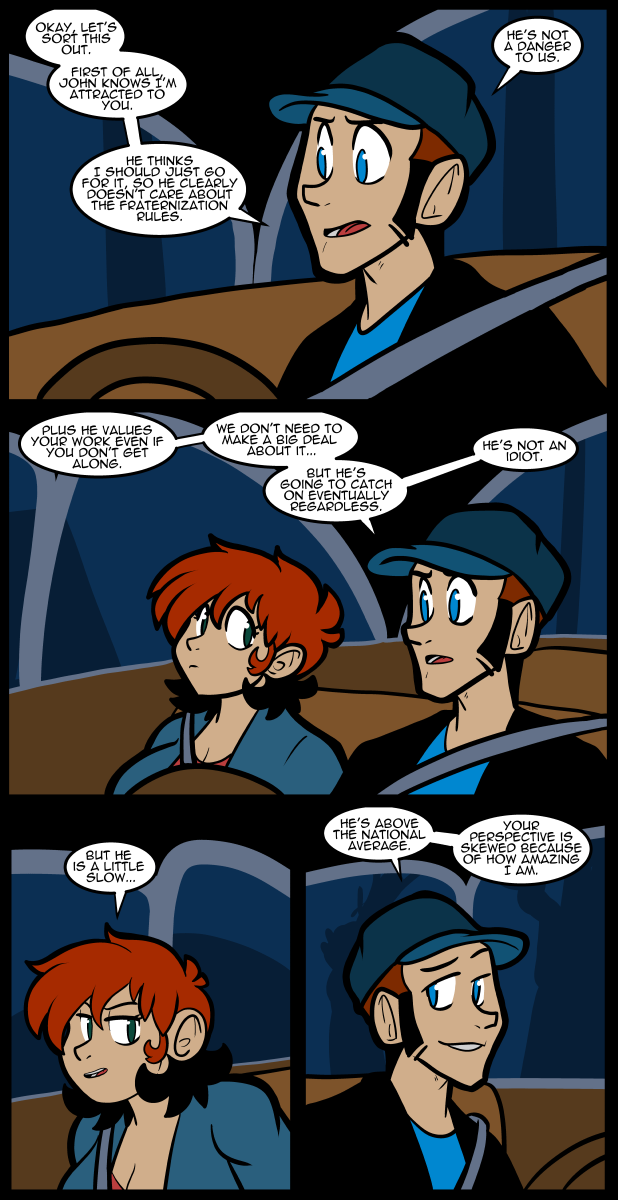 I don’t think we’ve ever fully explored Carol’s dislike of John. We kind of danced around it at one point, but her actual reasoning has never come up. It’s bound to come up eventually, but in a lot of ways the characters just accept it because, in all honesty, Carol’s a bit of a bitch. Obviously she’s been shown to have reasons & other aspects to her personality, but her public face, or the armor with witch she faces the world, is her bitchcraft. I’m willing to forgive a fair amount of bitchcraft because most women come to it as a reaction to the treatment they receive rather than it being their baseline personality. Of course that’s not always true, just like some men are born assholes some women are too. Carol is one who came to it as a defense mechanism & it transitioned into bullying over time. She’s getting better about it because of the support of her friends, but nobody’s perfect.

At this point, if I am remembering right, the only ones who don’t know they are dating are John, Mike, Reggie, and the Blonde Douche whose name I cannot remember. John would be pretty much like “I SO FUCKING CALLED IT!” Mike I can see being chill enough to look the other way and Reggie has been pining for Nina for ages so I don’t see him making much of an issue of it as he himself was disregarding the fraternization rule. About the only one I could see being any kind of Issue would be the Blonde Douche.

Carol already has reason to dislike him generally, beginning here:

Reggie also actively wants to keep Carol around. He’s aware of the work she does and knows she will be a key member of the team once he’s running the store, as he most assuredly will be ANY DAY NOW.

The point is Reggie stick to the rules. Always. That why he never really tried to date Nina. He would be quite displeased to know Thomas, his “mentor”, is breaking this rule.

I’m up late, so this might not make sense, but-

I hadn’t really caught on, that John + Carol didn’t get along. Whichever.
But since- John seems to date a lot of ladies, + wants to use his charm on them…and Carol has had a bad past, where [flirty boys?] and other people,…only noticed her for her amazing, upper story……I can see how these two people might not want to spend a lot of time together.

I only remember Carol’s reasoning about him being hired to get the rest of them fired, but if there’s more to it than that, I’d be eager to see. =)

In my world, people like Carol often have two faces, one -where if they are given respect by a guy the instant they meet him, they’re sweet and thoughtful. The second- if they are not shown respect, or are given the ‘Eye’ on first meeting, they are as tough as rusty nails, and somewhat ball buster-ish interacting with ‘The Guys’.

Carol seems like someone whose trust is worth earning, which makes up for a lot of behavior, so long as it’s “fair” for an undefined and entirely subjective definition of the word. Basically, if someone is standoffish, but seems to be that way for a reason, I can be patient. I had a co-worker who was probably seen that way by others, but she is actually quite fun and nice once you get to know her. I miss working with her, she had a great sense of sarcastic humor.

Every once in a while I hit a comic and it blows me away how natural the conversation sounds. This is a conversation I’ve had with my wife. I love it.

At this point, I think Carol is more willing to be friends with John than she realizes, she’s just making excuses to convince herself she still doesn’t like him. Ah grudges, the judgments they cloud.